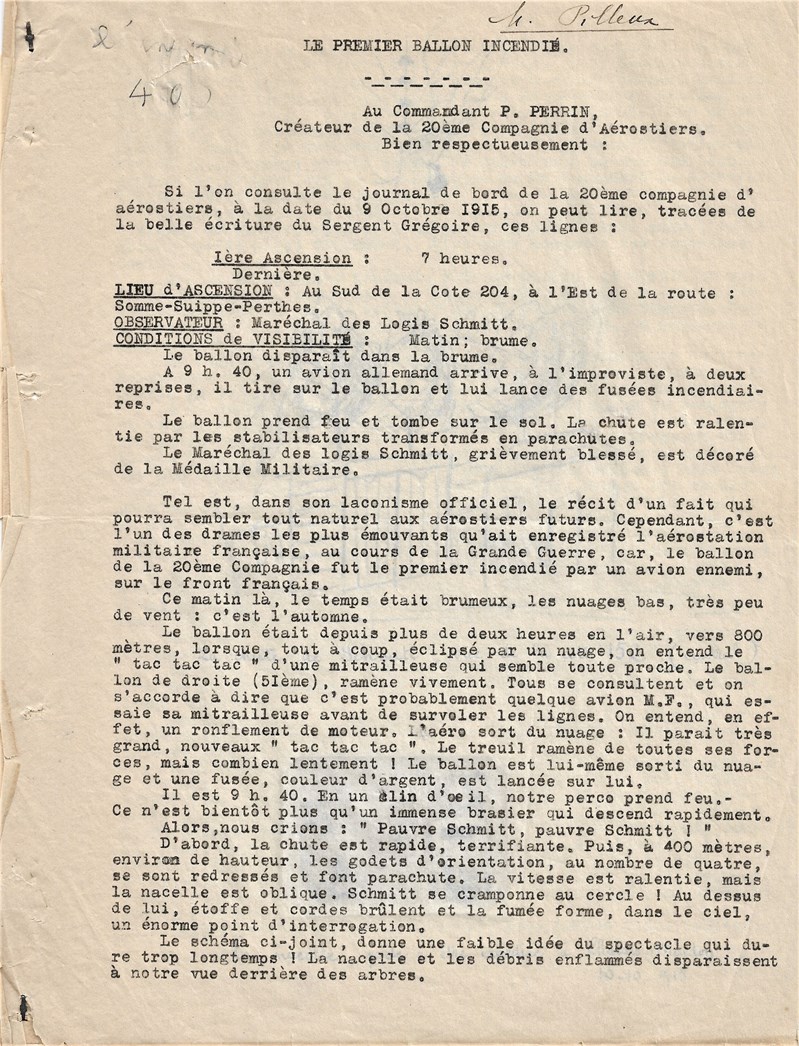 October 9,1915; 7am on the Somme-Suippe-Perthe, Marne, Part of the champagne region. 20th company commanded by Captain Perrin in the misty air a balloon had been in the air for 2 hours at 800m altitude.  From behind a cloud suddenly the staccato of a machine gun was heard, then the noise of an engine and an aircraft appears looking very big. New staccato of a machine-gun.   The winch brings the balloon down but so slowly.  The balloon is now out of the cloud. A silver rocket is fire onto it….

The whole ground team shout 'Poor Schmitt. Poor Schmitt'. At first the fall is terrifyingly fast. But at 400m the four orientation sockets set upright act as parachute. Schmidt hangs onto the metal circle. Above him the cloth and the ropes are burning. The smoke makes a huge question mark in the sky.

The gondola and the burning remains of the balloon disappear behind trees. 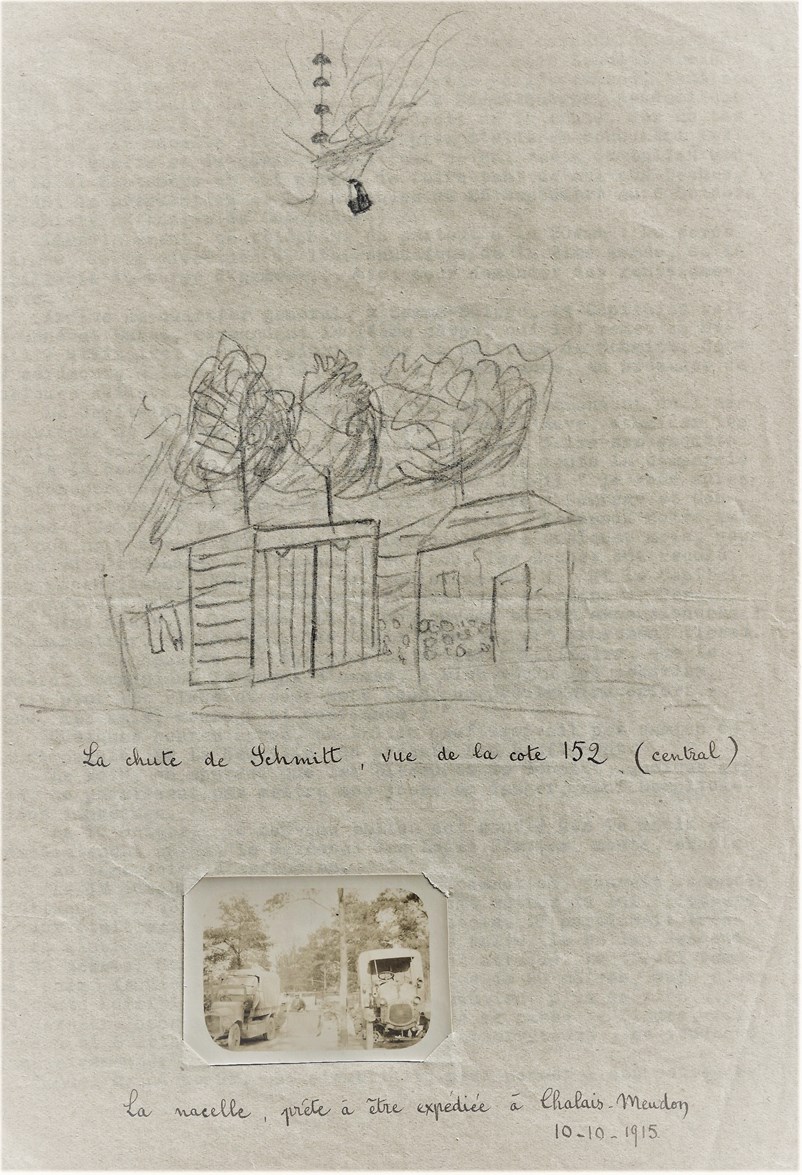 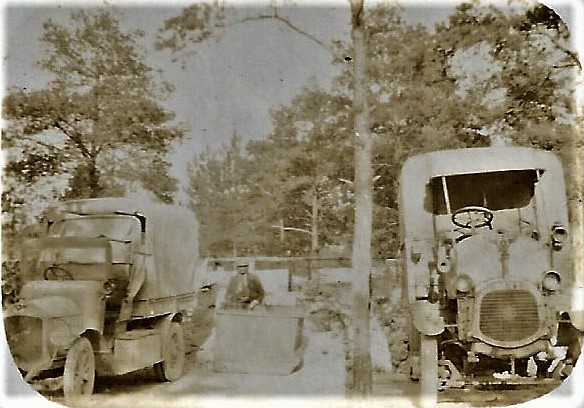 Captain Perrin in his car drives to the place where Sergeant Schmitt should have landed but he had already been sent to hospital by a medical officer who was passing by.

Smoking debris are what’s left of the balloon that ascended through the sky on September 21st giving so much grief to the Germans during the Champagne offensives of the 25th September until 6th October.

On arrival at the GQ in Somme- Suippe General Barret commanding Officer of 14AC gives Captain Perrin the Médaille militaire to pin on the chest of Sergeant Schmitt.

The next day at the same place, at the same time a new balloon was in the sky observing the enemy.

Schmitt later said that the German aircraft flew by no further than twenty meters from him. Pilot and observer were very pale. The observer shoots a first rocket, which misses. The second hits its target. The balloon in flames falls rapidly. From then on Schmidt doesn’t remember anything.

As a consequence of this attack a ground defence with one later on two machine-guns and sharp shooters was organised. In addition a look out to spot enemy aircraft was added to the defence.

By the beginning of 1916 all observers were equipped with a parachute. Later on as many observers were very hesitant to jump the parachutes were attached to the gondola.

Extracts from a report written by 'Le Guêpin' former member of the team manning Schmitt’s balloon on the day.  Private collection Francois Wicart (2021)

The first flight of an aerostat carrying a human on board 'Jean François Pillat de Rozier and the Marquis d’Arlande' took place on 21st November , 1783 in Paris. The first parachute jump took place on 22nd October, 1797 by Garnerin in the Parc Monceau, Paris. His wife Jeanne Labrosse would jump in 1799

The first military use of balloons was during the revolutionary campaign of 1793 at Maubeuge and Fleurus battlefields.

At the beginning of the XIX century balloons are considered too cumbersome. The French aerostatic Corps  is dissolved.

It wasn’t until the Franco-Prussian war of 1870/71 that they were used again especially for the communication between besieged Paris and the rest of the country. Gambetta  Minister of the Interior was one of the first members of the new Government of National Defence of the III republic instated on September 4th,1870 after the fall of the II Empire and the abdication of Napoleon III.  64 aeronauts, 91 passengers, 363 pigeons and 9000 kg of letters flew over the Prussian lines.

This great success led to the creation of the Balloon observation corps.

In December 1883 balloons went on campaign in Indochina, they were called back to be employed during the China expedition of 1900. Their last assignment before the great war was to Morocco in 1907.

Between 1884 and 1914 the army used various models of balloons differing by their size and the type of fabric. The most common was of 540 cubic meters. 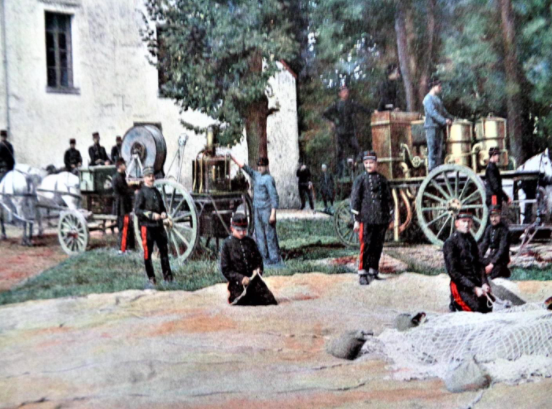 In the right hand corner is the net cover of the balloon on which all the cables and cords are attached.

But with the new enthusiasm for the 'Offensive a outrance' they were now considered cumbersome and slow so only the companies attached to fortresses were kept.

Captain Saconnay managed to have his company detached from the Epinal fortress   to be used at the front. His services were appreciated so much that by June 1915 General Petain asked for 75 companies to be created.

Positioning artillery observers on balloons, generally a few miles behind the front lines and at altitude, allowed them to see targets at greater range than they could on the ground.

The spherical balloons not being stable enough were soon replaced by a balloon copied from the German nicknamed 'Draken', of 820 cubic meters. 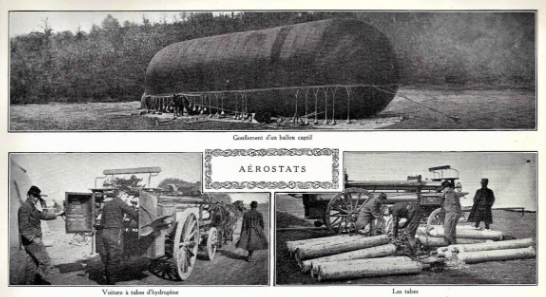 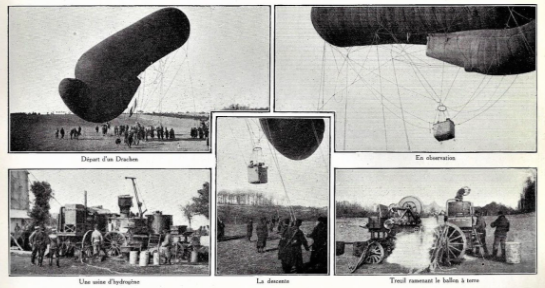 Images from the Private collection of Francois Wicart.

It was during the battle of Verdun that balloon companies were the most useful to direct the artillery fire but also to observe the movements on the battlefield. Typically, balloons were tethered to a steel cable attached to a winch that reeled the gasbag to its desired height (usually 1,000-1,500 metres)

Every army had its area divided into sectors. Each army corps was attributed a balloon company. Two machine-guns and later two 75 guns were then added as anti- aircrafts defences.

This organisation was also used during the battle of the Somme and for the preparation of the 1917 offensive of the 'Chemin des Dames'. Even though in this last occurrence balloon observation was impeded by bad weather.

During the summer and autumn of 1918 no longer disturbed by enemy artillery fire and air attacks the balloon companies followed the advance of the  Allied army relatively easily.

The death toll of the Balloon corps for the whole war was 128 officers, NCO’s and soldiers killed or died of wounds. 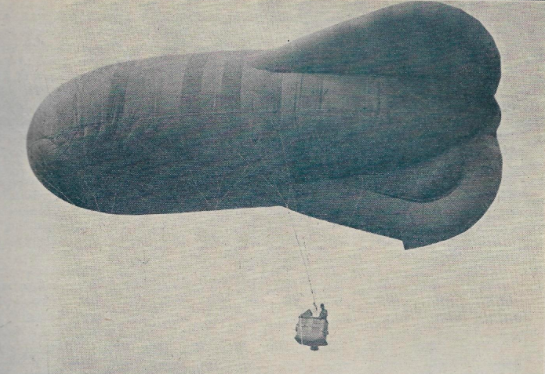 The Caquot was able to hold in 90 km/h winds and remain horizontal. During three years, France manufactured 'Caquot dirigibles' for all the allied forces, including the English and United States armies. Private collection.

1) The 'Médaille Militaire' was created by Napoleon III for exceptional deeds by Non Commissioned Officers and privates. It is the equivalent of the 'Légion d’Honneur' for Officers and the highest award attributed to a general commander in chief. It comes even above the Grand-cross of the Legion of Honour. On a general’s uniform the 'Médaille Militaire' is worn before any other decoration. If it comes after the Legion of Honour it means it was awarded when the recipient was an NCO.

2) Schmitt is a typical Alsatian name.