The Iron 12 : The inauguration of the Iron Memorial and Commemorative Plaques in Guise

This article first appeared in Bulletin No.91 October/November 2011. Bulletin and Stand To! are the two magazines of The Western Front Association, each are sent to members alternatively, each three times a year, either in print or digitally. 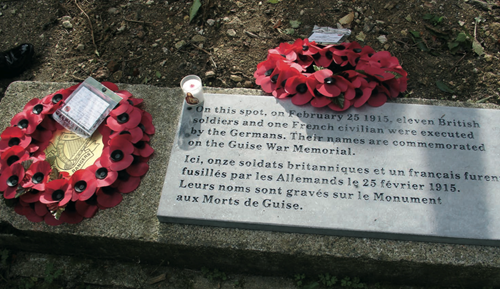 Between October 1914 and February 1915 Iron sheltered eleven British soldiers trapped behind German lines during the retreat to the Marne. The soldiers were eventually captured, tried and shot along with their principal French protector, Vincent Chalandre, at Guise Chateau on February 25 1915. The execution of the Iron 12 is the largest known incident of its type to occur on the Western Front during the First World War. A full version of the story appeared in 'Stand To!' Nos 87 and 88, Part 1. The Story of the Iron Twelve. Part 2. The Story of the Iron Twelve.

The Iron Memorial Fund was formed to find and mark the grave of Vincent Chalandre; to place a memorial plaque on the execution site at Guise Chateau; and to erect a memorial to the 12 in the village of Iron. We hope that the monument and plaques will stand as a memorial to the other Allied soldiers who were cut off and refused to surrender, as well as to the French and Belgians who helped them.

Saturday 17 September was a mild day, whose subdued rays of sunshine and vegetal scents hinted to us that we were on the hinge of autumn. Crowds gathered at the main gate of Guise Chateau from 08h30. There were soldiers old and new, in the form of the 10th Essex Regiment Living History Group; and a small contingent of the Light Dragoons, in France, but en-route to Afghanistan. Separated by 95 years both groups managed to present a united front of pristine military professionalism. Cultures as well as time were bridged. The Jocks Pipe Band, from Albert, Somme, mingled with the 24-piece band of L’Art Musicale de Guise. Also present were relatives of the 12. They had come from the UK, Ireland, France and the USA to be here this day; some were WFA members. The Connaught Rangers Association had sent a party of twenty pilgrims to pay their respects to the 12, a group which included five of their regiment. Whilst they waited, The Jocks played ‘The Minstrel Boy’.

At 10h00 the main gate to the Chateau opened and the crowd processed to the execution site. There Hedley Malloch, the Chair of the Iron Memorial Fund explained that the site was a particularly difficult one upon which to erect a monument. Each summer the Chateau hosted hundreds of young people who attended courses in masonry, carpentry and archeology. They used the site as a camp site. In the winter the site was used as a builder’s yard. Whatever memorial was placed here had to accommodate these twin uses. Permanent accommodation (dormitory, washing and dining facilities, a study room) for the young people who came here was one possibility, but such a project was outside the resources and scope of the Iron Memorial Fund. This would require significant funding. In the meantime the Iron Memorial Fund had decided to place a simple tablet on the execution site. Wreaths and a candle were then placed on the tablet, whilst the Jocks played ‘Amazing Grace’.

Throughout the day all addresses and talks were delivered in both French and English.

The entire party then retraced the last route taken by the 12 from the Porte de Secours next to the execution site, to the Town Hall which, in 1915, was the German Military HQ for the region, and where the 12 were held from their capture to their execution. From there the procession marched through the streets of Guise to St. Médard Cemetery. The procession was led by the party from the Light Dragoons, followed by the 10th Essex and Irish and French flag-bearers. The band of L’Art Musicale de Guise brought up the rearguard. The music alternated between L’Art Musicale de Guise and The Jocks. The streets of Guise throbbed with a heady mix of Scottish, Irish and French military tunes. 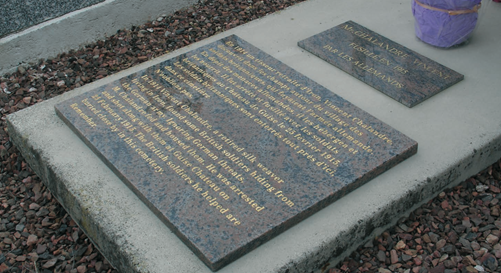 Once in the cemetery the procession made its way to the grave of Vincent Chalandre. The decision to form the Iron Memorial Fund was taken in 2006 following the discovery of his unmarked grave. This was hardly a fitting memorial for a Frenchman who was placed by the British government in the same category as Philip Baucq, Louise Thulliez, Louise de Bettignies and Eugène Jacquet, all of whom are today commemorated in the names of schools, streets and other public places throughout France. Chalandre, on the other hand, had nothing – not even a headstone. Following representation made to the town of Guise by the Iron Memorial Fund, the town agreed to adopt his grave and to place a simple marker upon it. The Fund then commissioned a plaque recording the details of his death and his links with the eleven British soldiers resting nearby. 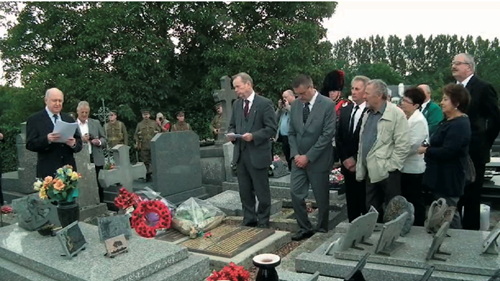 Following a short address given by Hedley Malloch on the importance of restoring Chalandre’s memory to its proper place in the history of the resistance to the German occupation, the party then moved to the collective tomb of the eleven British soldiers. 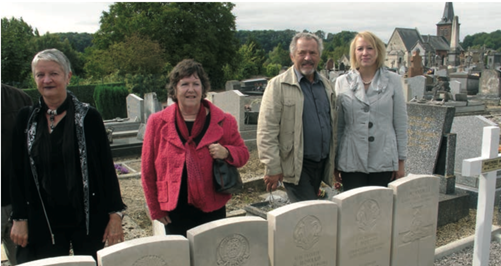 There wreaths were laid and addresses were given by the Mayor of Guise, M. Hugues Cochet, David Arrowsmith and Hedley Malloch. Here descendants of the twelve are seen at the graveside of the eleven British soldiers.

At the conclusion of the ceremonies at St. Médard Cemetery, the participants processed to the Guise Town Hall for a Vin d’Honneur. The Light Dragoons presented the Mayor of Guise with a print of the battle of Balaclava; and Oliver Fallon, Secretary of the Connaught Rangers Association presented a plaque of the regimental crest to the Mayor. In turn, the Mayor presented them both with La Médaille de la Ville de Guise.

After lunch the ceremonies moved to Iron, the hiding place of the eleven and the village where they were captured. The procession started at the site of the Logez mill where some of the soldiers were hidden. It is now an agricultural supplies depot, on the outskirts of Iron, about 300 metres from the centre of the village and the site of the new memorial. At 14h30 the procession made for the centre of the village, headed by the 10th Essex with the Light Dragoons closely behind. When they passed the site of Chalandre’s house there was a sharp ‘Eyes Right’ and salute. Second later the procession formed at the new memorial immediately adjacent to the existing monument aux morts. 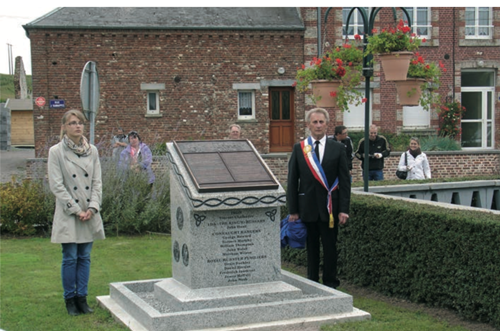 The ceremony opened with two pieces of music played by The Jocks, ‘St. Patrick’s Day,’ and an extract from Dvorak’s 9th Symphony known as ‘Going Home.’ The first was chosen as the regimental tune of the Connaught Rangers, the second for its associations with the north of England, a region linked to the Light Dragoons. This was followed by an address by M. André Gruselle, the Mayor of Iron, and direct descendant of the Logez ladies who looked after the eleven. He spoke movingly of the impact of the events on the village and on his family. Madam Francine Geeart-Kimpe, then spoke on ‘Resistance in the North’ during the First World War. She was followed by Mlle. Caroline Crame, the great-great-grand-daughter of Léonie Logez. Her address was entitled ‘The Women of Iron’. This moving and vivid description was written by Herbert Walton, a writer who visited Iron in the 1920s. The Jocks then played ‘The Gael’ before the monument was unveiled by M.Gruselle and Caroline Crame.

The monument was carved from a single piece of Wicklow grantite by Barry Feely, one of Ireland’s leading stone-masons and a keen supporter of the Connaught Rangers Association. It is surmounted by a bronze plaque. The plaque has a frieze of an Iron family welcoming the eleven into their home. Beneath is an inscription which reads:

“Between October 1914 and February 1915 the village of Iron sheltered eleven British soldiers trapped behind enemy lines during the retreat from Mons to the Marne. The soldiers and their protectors were arrested in a house which stood near this monument. All the soldiers and one villager were shot by the Germans at Guise Chateau on 25 February 1915. Their names are inscribed on this monument.

The families of those who had helped the soldiers were imprisoned. Their houses and businesses were burned to the ground. Some, including women and children, died as a result of their deprivations.

We remember all those Allied soldiers who refused to surrender, and the brave French and Belgian people, like those in Iron, who helped them.” 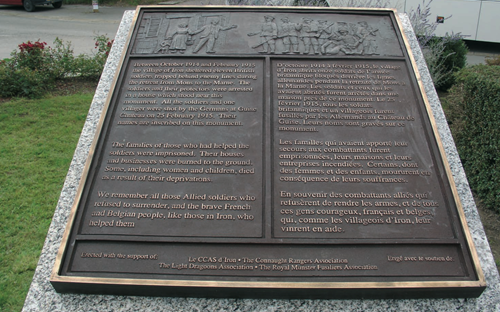 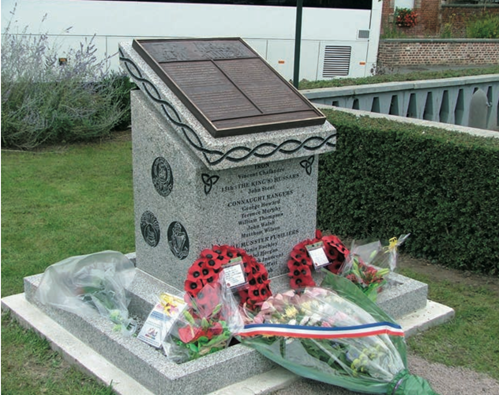 Finally, the plaque records the help of the participating regimental associations and of Iron. The plaque was designed and cast by Seamus Connolly. On one side of the monument are engraved the crests of the three regiments to which the eleven belonged: The 15TH (The King’s) Hussars, The Connaught Rangers and The has the names and dates of the two actions which led to the eleven becoming cut-off from their units: Le Grand Fayt on 26 August 1914; and Etreuxon the following day.

Finally, on the rear face we wanted to engrave an emblem to represent Iron. This was difficult as the village has no coat-of- arms. After much deliberation we chose a water mill. These were an important part of village life, and part of the drama was set in the Logez water mill. 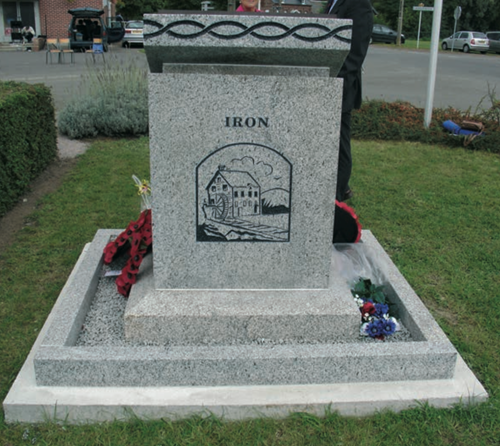 The unveiling was followed by L’Appel des Morts. This is an impressive part of French Armistice Day commemorations when the names of the dead on the memorial are read out and, briefly, the names become people. This was eloquently performed by Oliver Fallon. He was followed by Francine Geeart-Kimpe who read the names of those deported from the village and imprisoned in Germany for their part in the affair. Wreaths were then laid at both the new memorial and the village monument aux morts. This was followed by a rendition of ‘Danny Boy’, a tune which left some tears on cheeks. RSM David Rae of the Light Dragoons delivered The Exhortation ‘For the Fallen’, an oration so delicately yet so precisely performed that it seemed, in the words of one observer, as if his words floated in the air. After the French and European anthems, the 10th Essex discharged a Volley of Honour over the new memorial.

The ceremony concluded with the National Anthems. Afterwards the participants repaired to the Salle de Fête where an exhibition on ‘Resistance in the North during the First World War’ was on show and a Cocktail de Clôture was offered.

There remained two final acts of remembrance. The Light Dragoons departed for their evening billet in Arras, stopping at Etreux CWGC to pay their respects to Private William Wilkes of The 15TH (The King’s) Hussars, John Stent’s comrade in arms who was killed in action on 27 August 1914. And the 10th Essex bade the Chair of the Iron Memorial Fund farewell, shouldered arms and, as a mark of respect to the 12, they quick-marched the five miles from Iron to Guise along Etreux-Guise road, passing some astonished French drivers as they re-traced the steps of the BEF after Le Cateau and Etreux. The road was a life-line for thousands in those desperate days at the end of August 1914 – but not for the twelve brave souls whose memory we had just honoured. Professor Hedley Malloch. 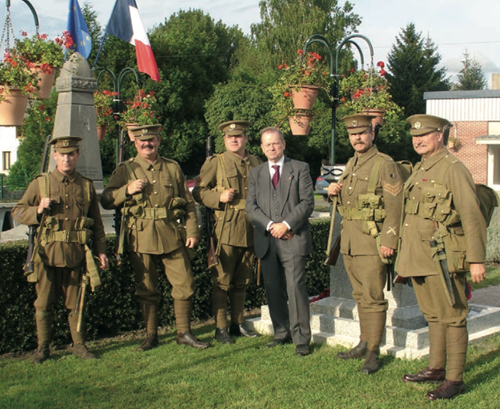 And The Light Dragoons departed for their evening billet in Arras, stopping at Etreux CWGC to pay their respects to Private William Wilkes of The 15TH (The King’s) Hussars, John Stent’s comrade in arms who was killed in action on 27 August 1914.