The most successful British Bomber Aircraft of The First World War

An introduction to British Aircraft of the First World War

If one were asked to choose a paradigm to represent the effect of a major war on the speed of technological change, the evolution of heavier-than-air aircraft in the First World War would be a good choice. But of particular note would be the dramatic development of the immediate pre-war basic wood and fabric, single-seater bi-plane, such as the Sopwith Tabloid ex-racing plane, into the dedicated machines of total war such as the Handley Page Type O/400 heavy bomber of 1918.

The advent of the aircraft as an effective weapon of war and terror made it possible for the first time to strike the enemy far beyond the range of ground artillery, or the shell-fire of even the largest warships. It also brought into range virtually the entire population of the enemy, both military and civil. Only small segments of the civil population were eventually safe from the threat from the skies and all felt its malign effects on their way of life.

At the outbreak of the War in August 1914, the British Royal Flying Corps (RFC) - later, on 1st April 1918, to be combined with Royal Naval Air Service (RNAS) to become the Royal Air Force, (RAF) - had no bomber aircraft in service and none was on order. 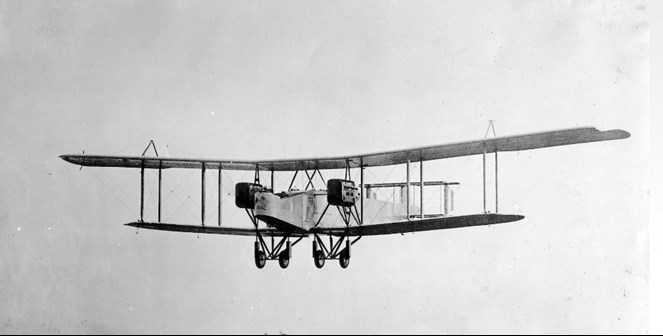 The development of the Handley Page prototype

Handley Page Ltd quickly responded and came up with a design identified as the Type O, later redesignated as the Type O/ 100. Four prototypes were built.

In specification it was:

The first prototype flew on 7 December 1915, but was found to be overweight. Accordingly, the cockpit glazing and armoured plate was removed in the second prototype which first flew in April 1916. This type became the production model and a total of 42 production O/100’s were built.

The first bomber squadron of the HP O/100 was formed in August 1916 and was deployed on the Western Front in November 1916 by 7A Squadron, RNAS, stationed at Dunkirk, France.

The HP O/100 first saw service in a night attack on the 16/17 March 1917, when a single aircraft attacked a German railway station at Moulin-lès-Metz in occupied France. Also daylight attacks began including a successful attack on a German destroyer in April 1917. However, due to a loss of an aircraft to German fighters, the HP O/100 was restricted to night attacks, usually by single aircraft, whilst the targets were changed to enemy-occupied Channel ports, airfields and the railway system.

Other deployments were anti-U-boat patrols in British waters and to Greece where a HP O/100 based at Mudros, Lemnos attacked Constantinople, the capital of the Ottoman Empire.

One HP O/100 fell into German hands in January 1917 when it strayed behind enemy lines, but it subsequently crashed whilst being test-flown.

The HP O/100 was successfully flown throughout the war but was superseded by a more powerful engined Type, with some additional technical modifications, the HP O/400.

The more notable specification changes of this Type were:

A total of 663 HP O/400s were built including 107 that were built under licence in the United States by the Standard Aircraft Corporation (SAC) fitted with the aforementioned USA Liberty engines. An order for more than 1,000 more of the SAC production was cancelled after the Armistice.

Another Type of the HP heavy bomber aircraft, an even larger four-engined version designated the Handley Page V/1500 (the Super Handley), first flew in May 1918. It entered into service with the RAF in October 1918, principally as a night bomber, and three became operational with 166 Squadron in November 1918. But it never saw combat service due to the end of the war: the first sortie on Berlin by three aircraft on the night of 10 November 1918 was literally taxi-ing on the runway when the flight was called off because of the imminent declaration of the Armistice the next morning.

The principal differences in specification between the HP V/1500 and the HP O/400 were:

The HP O/400 aircraft only remained in squadron service for a short while after the Armistice, being replaced by the Vickers Vimy heavy and Airco DH 10 Amiens medium bombers.

However, the later types of the Handley Page bomber continued to fly and some were converted to passenger airliners – the former HP O/400 carried 10 passengers and the HP V/1500 took 40 - whilst others were used on endurance and route proving flights.