The tale of four lads from Buckie, Banffshire

The fishing community of Buckie responded enthusiastically to the call for recruits on the outbreak of war in 1914. Although initially it was reported that fishermen were not sure what arm of the British forces in which to enlist, the creation of the Royal Naval Division resulted in more than 100 men enlisting in October 1914. Before leaving on a special train destined for Crystal Palace on 7 October 1914, the recruits were entertained to supper by the Town Council and were photographed on Cluny Square. 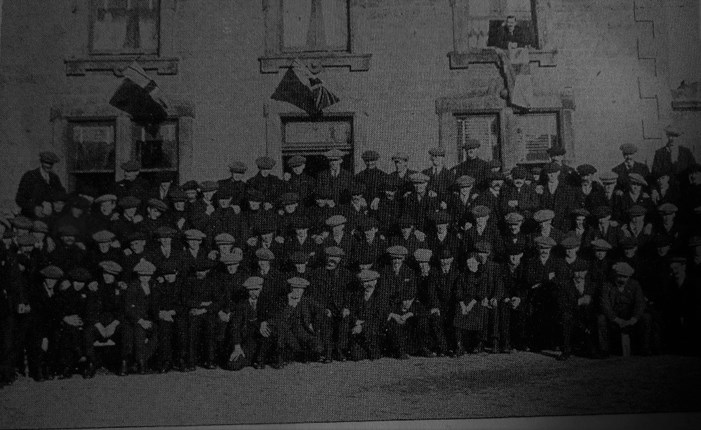 Above, a photo some 70 or so of the recruits in Cluny Square. How many of these came home again? It is not known if the photograph here includes the four lads featured in this piece. 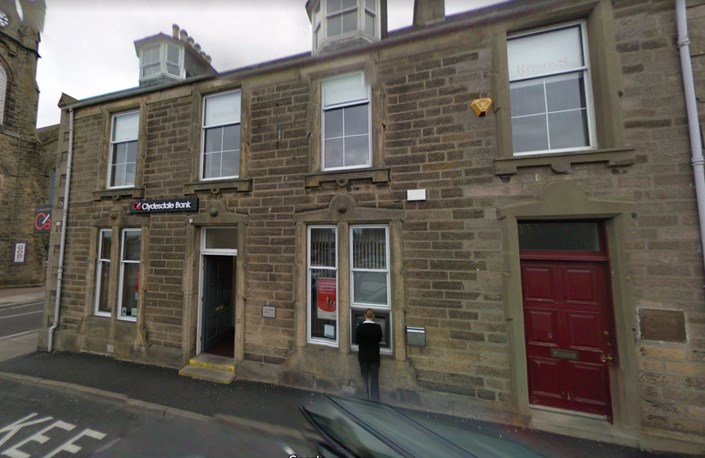 Above: the distinctive detail around the windows in the 1914 photograph enable us to identify the building as being the Clydesdale Bank. It will be noted that the original photo has been 'flipped' on its axis.

Four young Buckie lads enlisted at that time. This photograph shows four happy young men. But only one would survive the war. 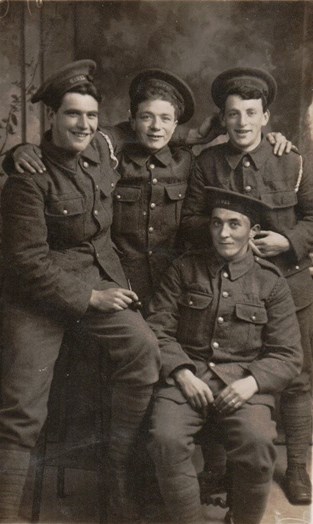 Above: Back row from left to right: Robert Scott, John Birnie, William Robert Milne and in the front row, John Cowie. Image from the family archive of Carol Johnstone and originally published in 'Moray's Sacrifice' (2018) by Jill Stewart, the author of this article.

The pals all survived Gallipoli, serving in A Company of Hawke Battalion. Robert Scott was invalided back to Britain in August 1915 whilst John Cowie was invalided home in October 1915, with the two other friends serving in Gallipoli until evacuation at the end of 1915.

By January 1917, the four lads had served in France for a few months - John Cowie in the Nelson Battalion and the others in Hawke Battalion. On 18 January 1917, Nelson Bn went by motor coach from Rubempre to Lancashire Dump and from there marched to Beaucourt to take up positions in trenches in the left sector at Beaucourt, where they relieved three battalions from the 49 (West Riding) Division. They remained in the trenches until the night of 22 January 1917, but on this date, John Winchester Cowie was reported as killed in action. 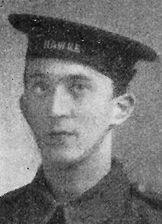 John was born in Buckie on 5 July 1891, the son of Georgina Winchester who later married George Cowie. John studied Arts at the University of Aberdeen from 1911 to 1913 but by the outbreak of war was working as a clerk with a fish salesman in Buckie. He was slightly wounded in the fighting in the Battle of the Ancre in mid November and admitted to hospital at Etaples, rejoining the battalion a few weeks later in December. 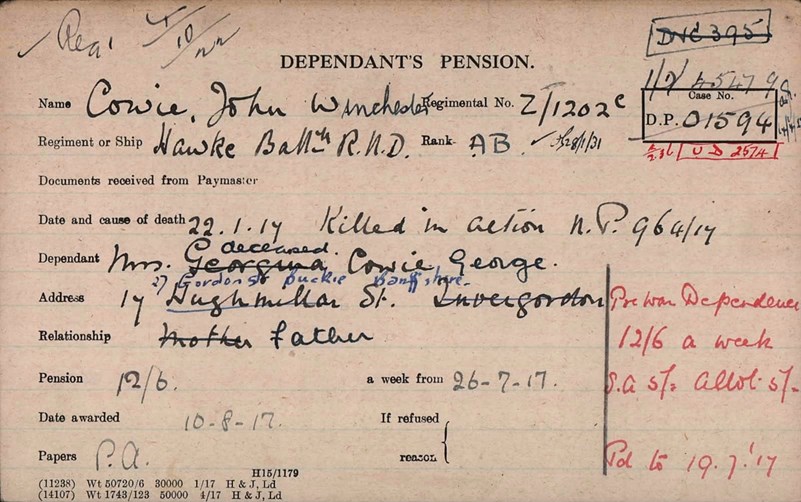 Above: The Pension Card for John Cowie

At least one of his three friends from Buckie assisted at his burial, although the grave was subsequently lost and he is commemorated on the Thiepval Memorial.

On 31 January 1917, Hawke Bn received orders to carry out an operation along with Hood Bn, with Nelson in support, and on 2 February 1917 moved by motor lorries from billets to Mesnil and then marched to a support position, The objective of the attack was to take Puisieux and River Trenches occupied by the enemy. The action, between 3 and 5 February 1917, resulted in the capture of the objectives, but with the loss of 59 men killed and 32 missing. Both William Milne and Robert Scott were killed in this action.

William was born in Buckie on 1 December 1894, the son of Alexander and Annie Milne, and the youngest of ten children. Prior to the war, he had worked as a bank clerk in the 'North of Scotland and Town and County Bank'. 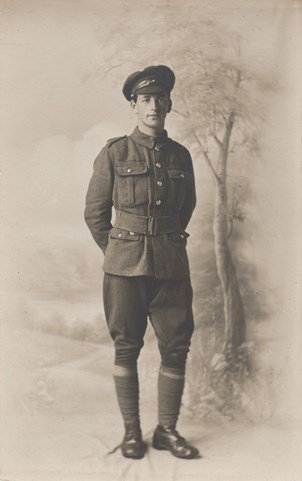 Above: William Milne.  Image from the family archive of Carol Johnstone and originally published in 'Moray's Sacrifice' (2018) by Jill Stewart, the author of this article. 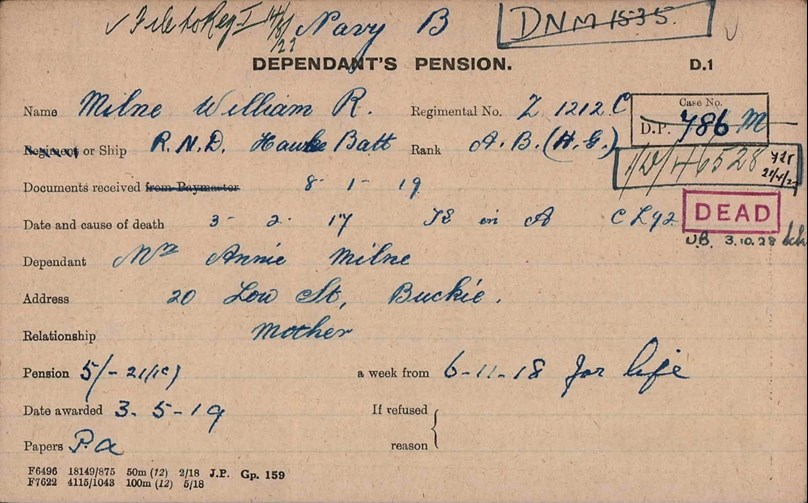 Above: The pension card for William Milne 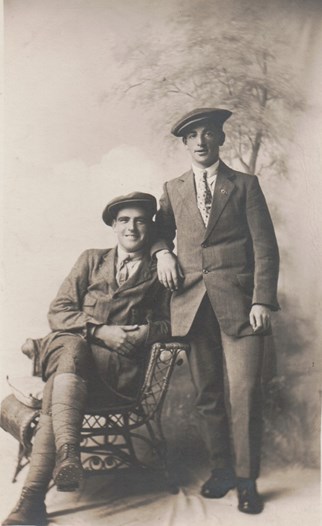 Above: picture of Robert Scott (seated). Image from the family archive of Carol Johnstone and originally published in 'Moray's Sacrifice' (2018) by Jill Stewart, the author of this article.

Robert was born on 28 April 1894, the fifth son of Alexander and Jane Scott. He served an apprenticeship working with a local chemist but was working in Fraserburgh when the war broke out. He returned to enlist with his friend, John Cowie, and indeed, the pair have consecutive service numbers. 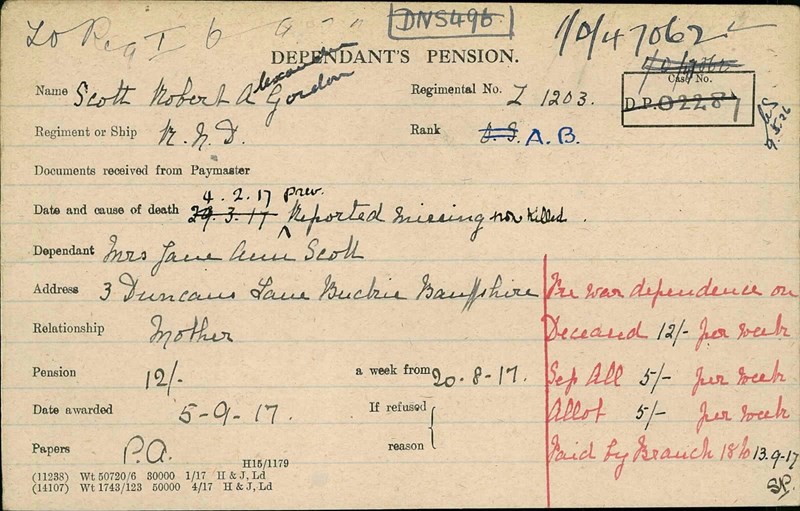 Above: The pension card Robert Scott

The only survivor of the four pals was John Birnie, who was demobbed in 1919. He married Flora in 1920 at Buckie and lived to the age of 87. His three friends are all commemorated on the Thiepval Memorial. 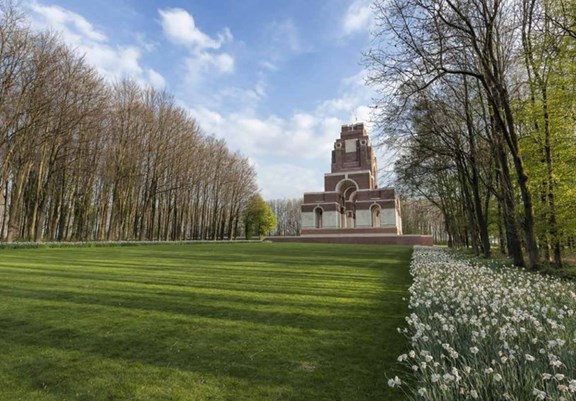 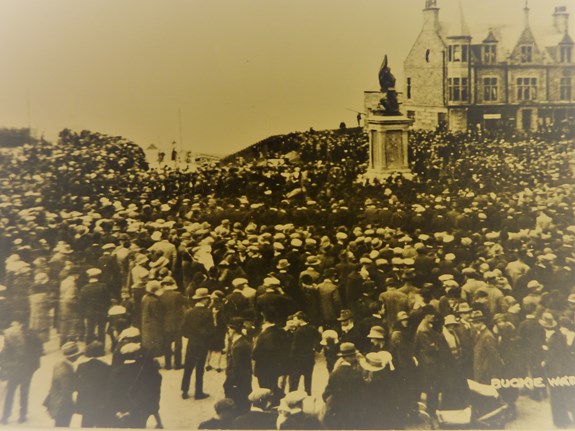 Above: The unveiling of the Buckie War Memorial  in 1924.

The Memorial was one of the last to be unveiled in what is now Moray (Buckie was in Banffshire in the war years). It was later relocated to its current position in Cluny Square. 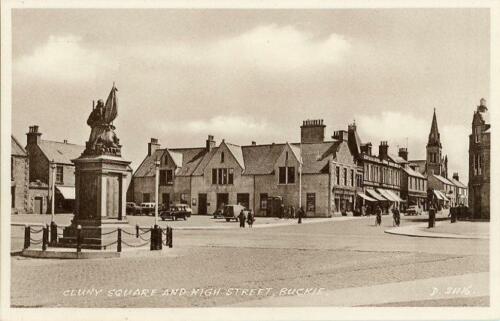 Above: The Buckie War Memorial before its move, and Below: after its move. 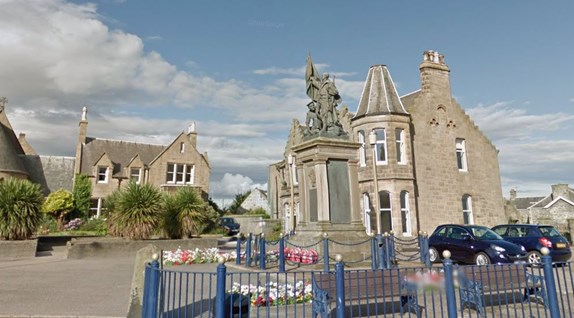