The VC is said to be made from scrap metal cut from the terminal bosses (cascabels) of two Chinese-made brass cannons captured from the Russians at the Battle of Sevastopol in the Crimean War, 150 years ago. These boss-less cannon stand outside an Officers' Mess in Woolwich, on the River Thames, in London, England. However, more recent research by author John Glanfield suggests medals made since 1914 do not come from this source. 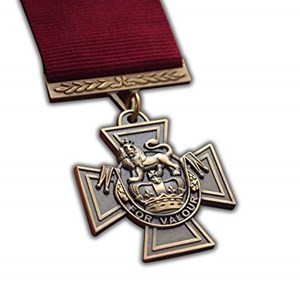 Whilst the original (1856) specification for the award stated that the ribbon should be red for army recipients and dark blue for naval recipients, the dark blue ribbon was abolished soon after the formation of the R.A.F. in April 1918. 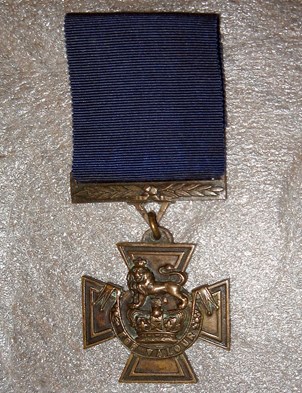 The intrinsic value of the medal is a few tens of Pounds Sterling - not as frequently stated, a few pennies! Of course, it is priceless to the individual concerned, though many have been sold over the years by the recipients during their lives - often due to poverty or illness - and many more after their death. Today there is a very strong collector's market for any VC that is put up for sale; the current record being, in 2009, the sum of £1.5 million paid by Lord Ashcroft for the 'double VC' awarded to Noel Chavasse.

List of Western Front citations by battlefield or action, 1914-1918.

However, these figures are not yet complete, as two other categories need to be included. They are the 18 VCs of the air war (from 1915-1918) - with six awarded posthumously - and the 11 VCs of the 1918 Zeebrugge and Ostend naval raids - with two posthumous awards. (Four of the 11 Zeebrugge and Ostend VCs were elected under the ballot system as detailed in Rule13 of the Royal Warrant).

N.B. For readers who are interested in the biographical details of the individual holders of the VC, there are, of course, innumerable references and books on the subject. For an up-to-date reference that is likely to be currently available in the local Public Library, the author would recommend 'Symbols of Courage' by Max Arthur (2004) - ISBN 0 283 07351 9 - published by Sidgwick and Jackson/Pan MacMillan Ltd, London, England. The author would like to acknowledge that he has found this book most useful in verifying and cross-checking some of the data used in this article, whilst accepting that any errors and omissions are entirely his own.