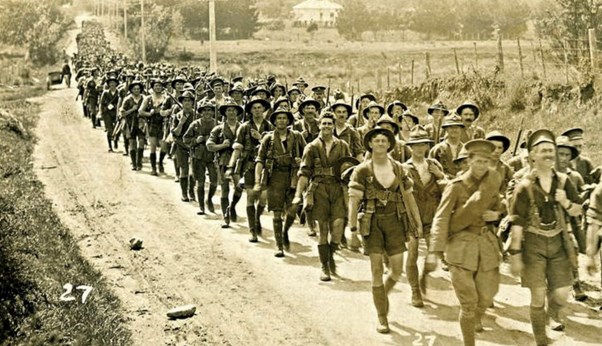 Many historians of the Great War, both professional and amateur, have used much ink and paper in the discussion of why, uniquely among the major Powers, the British Army never faced serious mutiny in the Great War. And, particularly, given the horrendous casualties and terrible conditions in the trenches, why this did not happened on the Western Front as it did so catastrophically for the French and Germans. On the Eastern Front and in Asia*, political and revolutionary movements gave the mutinies there an entirely different causation and effect.

In this short article, the British experience with the seeds of mutiny on the Western Front are considered.

Throughout British military history, mutiny has always been considered as a particularly dangerous threat to the conduct of war. The Indian Mutiny (1857) was for a long time in the back of the minds of military figures of authority at all levels, from Army Commander to battalion NCO; recalling all the horrors and uncertainty that that mutiny wrought on the British Army. Consequently, all British service-men in the Great War were, from their first day of service, made only too aware of the penalties associated with mutiny, leading, ultimately, in time of war, to death by firing squad**. Incredibly, because of, or perhaps despite, this well advertised sanction, only three British servicemen were executed for mutiny during the Great War.

The definition of mutiny in the British Armed Services as set down in Mutiny Act of 1689 (and still valid as part of the 1913 Army Act), was astonishingly broad: 'Organised act of disobedience or defiance by two or more members of the armed services'. In practice, capital punishment has usually been reserved for the so-called 'ring-leaders' of mutiny in time of war.

From 1914 to 1920, only 1,800 British servicemen were court-martialed for mutiny with, incredibly, the Western Front accounting for only 42 such charges. The list of the recorded British so-called 'mutinies' - though some would be more properly labeled as 'strikes' or ' collective indiscipline' - is rather short and may be summarised as follows.

* Following the 1915 Singapore Garrison Mutiny by Muslim soldiers of the 5th Light Infantry against British rule in India, that was actively encouraged by Germany, British soldiers carried out the execution of the 37 ring-leaders by shooting; 21 in public. A further 18 indigenes involved in the plot were hanged in India.

** During the Indian Mutiny of 1857, mutinous native levies were blown from the mouths of cannon. This was a particularly severe punishment since these native soldiers believed there would be no after-life if their bodies were so mutilated.

By comparison, estimates for the number of mutineers in the French Army vary from 25,000 overall, to 40,000 in 1917 alone. At least 400 were condemned to death and 50 were definitely executed in 1917. The French also freely acknowledged that many more executions, particularly in the early years of the war, went unrecorded. In November 1914, just three months after the outbreak of hostilities, five reservists called-up to the 3rd. Battalion, Dorsetshire Regiment, got into a drunken brawl and ended up being charged with mutiny whilst, nearby, on Salisbury Plain, complaints about bad food by engineers of the 152nd. Field Company led to a 'silent protest' which, by the terms of the Mutiny Act, could certainly have been considered as mutiny. In all probability, later on in the war, when the experience and pragmatics of war had produced a more professional army, and a more seasoned outlook, it is unlikely that either of these incidents would have been allowed to develop to the extent of a courts-martial offence. They would have been effectively dealt with 'in house'.

Nevertheless, there are three fully recorded mutinies of British troops that occurred on the Western Front. To these must be added a serious case of 'collective refusal' that occurred in 1916 at No. 1 Military Prison, located at Abancourt Military Prison, Blargies North Camp, near Rouen; allegedly Australian troops fomented the disturbance. Paradoxically, this 'non-mutiny' led to two of the British executions classed as for 'mutiny'. Also, right at the end of the war - October 1918 - troops of the Australian Expeditionary Force mutinied on a large scale. The basis of their action being a complaint that they were over-used in trouble spots resulting in exceptionally heavy casualties.

Of the three British mutinies, two involved Welsh troops. The one involving the South Wales Borderers, 12th. Battalion occurred in January 1916. The second, in September 1917, was limited to a small, specialised trench mortar team of the 38th. (Welsh) Division. The third, a much more serious mutiny, in 1916, concerned troops from many different units passing through the base training and transit camps (50,000 or more soldiers at any one time), at Etaples in Northern France.

The Etaples mutiny is particularly well known and almost every general book about the Western Front makes mention of it. At least four books deal with it in some detail. Also, a television film has been (loosely) based upon it. It was much the largest British mutiny. Once again it was alleged that a core of truculent ANZAC troublemakers initiated the disorder and were quickly supported by troops from Scottish regiments and others.

These three British mutinies only resulted in one execution, that of Cpl. Jesse Short, 24th. Battalion Northumberland Fusiliers for being a 'ring-leader' in the Etaples mutiny in September 1917. On the basis of the evidence, he was guilty, as charged. But it is equally obvious that he was in the wrong place at the wrong time when anxious HQ wallahs were trying to get control of the situation.

The other two British executions for mutiny on the Western Front were actually for what can only be called 'incitement to disobedience'. The first case was that of Gunner William E. Lewis of 124th. Royal Field Artillery. Gunner Lewis, aged 30, had a long history of insubordination. He had previously been court-martialed twice; once for theft and again for absence. There was clear evidence at his court-martial that he was dominant among the seven prosecuted 'ring-leaders' of the Abancourt Prison troubles in August 1916, and eventually he paid the price for his leadership by being shot at Rouen, France, on 29th October 1916. He is buried in the CWGC plot at St. Sever Cemetery, Rouen, France. The remaining mutineer, also executed at Rouen, on the same day and the same place, was Pte. John (Jack) Braithwaite, a 35 year old Australian, and former journalist, serving with the New Zealand Rifle Brigade. He also had a long history of military misdemeanors, including desertion and, more significantly, a charge of mutiny whilst confined at the Abancourt Prison Camp, Blargies: but on a different occasion from Gunner Lewis & Co.'s digression. He was also buried in the CWGC plot in the St. Sever Cemetery, Rouen, France.

As for the reason why the British Army did not suffer the debilitating large scale mutinies that were experienced by all the other major players in the conflict, the propositions are almost as many as the authors proposing them. But certain areas of consensus can be drawn. At the times when conditions and catastrophic events were most expected to provoke unrest (e.g. the Battle of Loos, 1915, the First Battle of the Somme, 1916, the Third Battle of Ypres, 1917 and the disasters of the Spring, 1918), the soldiers in the British army were largely volunteers from Kitchener's New Armies and conscripts. Most of the hard-bitten, professional soldiers of the pre-war army were by then long in their shallow graves along the length of the Western Front, repatriated to the UK maimed and disabled, or just burnt out. Embracing the full width of British society, from the landed aristocrat to the rural labourer, most of the soldiers of the New Armies and the conscripts had families and friends at home with whom they had strong emotional and family ties. They were unlikely to behave in any way liable to bring disgrace to themselves or their family. Also, all were used to an authoritative society strongly dependent on deference. These 'for the duration' soldiers both knew their place and understood the expectation that they maintain it. Orders were orders, be they ever so irrational, providing they were considered legal and morally right. With the exception of elements of the battle-effective but, by the standards of the time, comparatively undisciplined Australian troops, potential mutinies only seemed likely to flourish when the authorities allowed what were considered unfair and unnecessarily harsh practices to develop. A particularly notorious example being the activities of the infamous 'canaries' (largely NCO's who had no front-line experience) of the Etaples training and transit camps. They bullied, harried and cajoled the new recruits, returning wounded and veteran soldiers alike under the guise of 'spit and polish' military efficiency and often out-of-date military tactics.

This abhorrence of mutiny by the British serviceman in the Great War was no one-off phenomenon; there were, with one questionable exception, no large scale and overt mutinies at all in the Second World War and the in succession of post-war global conflicts that continue to this day. The exception was the unrest at Salerno, Italy, in 1943 when 300 British convalescent veterans awaiting repatriation refused to move inland and be forcibly transferred into regiments other than their own. This was quickly seen as inept management and the situation rapidly defused.

Whilst the leadership of the British Army has had its share of martinets, incompetents and plain rogues, in general it has been managed by disciplined, conscientious and decent officers and NCO's: the men have responded accordingly.