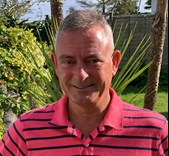 Rocky Salmon retired from the Royal Navy as a Captain in 2019 after serving for 35 years, primarily flying Sea King Helicopters from Aircraft Carriers, whilst also completing numerous exchange tours with the Royal Air Force and United States Navy. He has been a member of the Western Front Association for 10 years and his passion for the history of the Great War began when he worked on a project on the Battle of the Somme at college in 1982. He has continued to read and research widely on the subject ever since and completed an MA in Britain and the First World War at Wolverhampton University just before retiring from the Navy. Working now as an independent Battlefield Guide and Early Career Researcher, he is also an ordinary member of the International Guild of Battlefield Guides and is an active volunteer for the Commonwealth War Graves Commission.