As the various projects WFA members are working on move forward, it seems a good time to update members on just a couple more examples of unusual pension claims that would not have been identified had 'Project Alias' and 'Project Hometown' not been set up.

Previous reference has been made to cases where multiple brothers have been killed in the Great War. It can be almost impossible to identify these cases without reference to the Pension Record Cards. In the example below we have the Quinn family from Belfast. 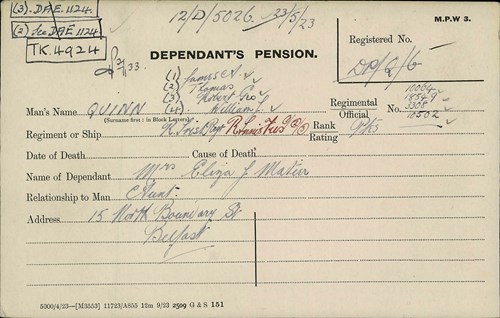 As can be seen Eliza Mateer made a claim for her four nephews - at least two of whom were brothers. 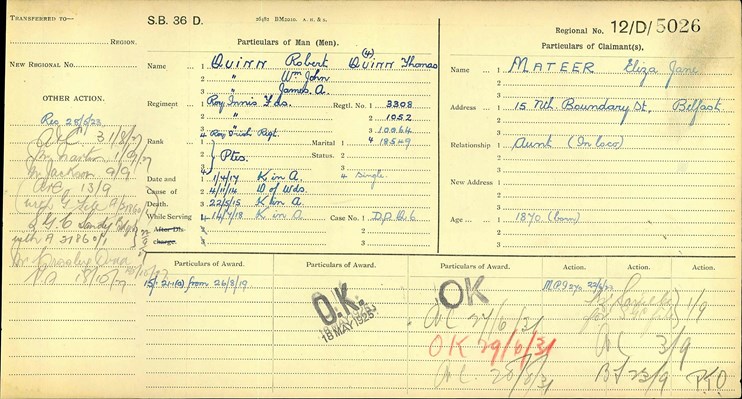 William (2/Royal Inniskilling Fus) was killed on 4 November 1914. He is buried at Bailleul Communal Cemetery.

James (1/Royal Inniskilling Fus) was killed on 22 May 1915 in Gallipoli. He is buried at Twelve Tree Copse Cemetery.

Robert (2/Royal Inniskilling Fus) was killed on 1 April 1917 and is buried at Savy British Cemetery.

Thomas (2 Royal Irish Regiment) was killed on 14 July 1918 and is buried at Louvencourt Military Cemetery.

There must be dozens of similar tragic stories that were previously hidden, that are now being revealed via the Pension Records.

The second curious case is that of the Sara Guinney. Unscrambling her story may be of interest to a WFA member. The reason for this being remarkable is that Sara's husband Hugh Guinney served in the army as Private Hugh Gavin (this surname - Gavin - being how he is recorded by the CWGC). He served (like two of the Quinns mentioned above) in the 2/Royal Inniskilling Fusiliers. 'Private Gavin' number 2638 is commemorated on Le Touret Memorial to the Missing having been killed on 16 May 1915. 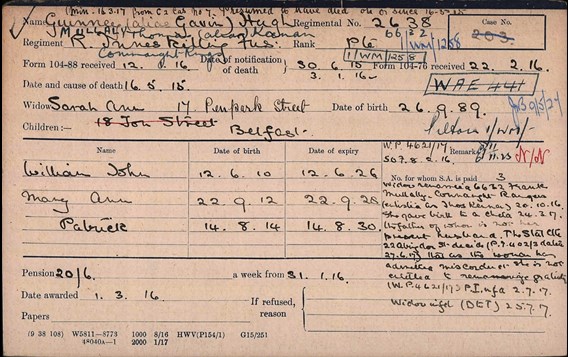 However, at this stage Sara's story becomes more difficult to untangle.

Following the death of her first husband Hugh Guinney (or Gavin) she remarried Thomas Mullaly on 20 October 1916. Thomas also used an alias, being known in the army as Thomas Keenan. Thomas died on 11 July 1917 in Mesopotamia (modern day Iraq).

There is a reference to a child being born in March 1917 which was not that of her second husband, which caused the Ministry of Pensions to make the note that she was not entitled to a 're-marriage gratuity'. 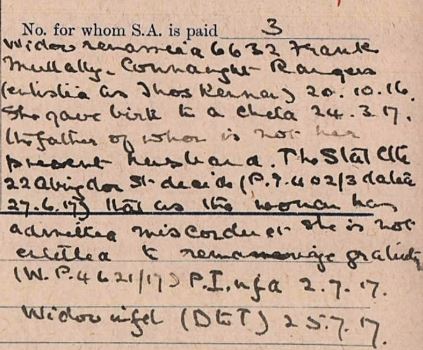 As can be seen from the above record, Sara seems to have married for a third time, but the writing on the card is difficult to comprehend.

If anyone wishes to take on the research of this case, please do so and if there's a story here, we will look to publish the results. However, what would be even better would be more volunteers to come forward to help with 'Project Hometown' - this is a truly massive piece of work which is progressing very well, but which needs a lot of members to do the research. We already have lots of WFA members who are making massive progress with this work, but even more would help super-charge the pace of the project.