There are many fascinating quirks within the Pension Record Cards which have been saved by The Western Front Association. One particular aspect that has come to the fore is the greater than expected use of aliases by soldiers. Without going into the reasons soldiers used pseudonyms,[1] the use of these aliases has been noticed by several people using the WFA pension records.

However, there is also major difficulty in identifying these men. One of the reasons for this is the inconsistent way these records were written up by the Ministry of Pensions clerks nearly 100 years ago.

Initial research has suggested that if we use the database of servicemen who are recorded by the CWGC, there should be over 3,600 'aliases' recorded on the pension cards.[2] However randomly sampling the WFA's Pension Records suggests the number may be much higher.

The other fundamental problem here is the fact that some of the cards do not record the alias suggested by the CWGC. Quite often this may be because a pension may have been claimed and paid using the soldier's 'real' name rather than his 'army' name. Sometimes, even though an alias is recorded, it has not been picked up in the tagging/indexing process by Ancestry/Fold3.[3]

This provides the WFA with a fantastic opportunity to make a permanent difference to the whole subject of men who used aliases when joining the army during the First World War. We believe it is possible, using the expertise, skill and knowledge of WFA members, to tackle the issue of identifying those men who used an alias.

Here are some pension cards of soldiers who served using an alias. 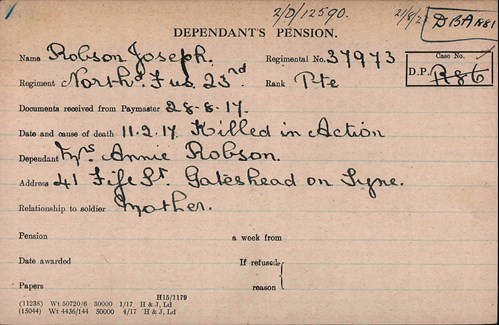 This is the card for Joseph Robson, however he did not serve as Robson, Storey is his "army name". Nothing on this card suggests an alias. Evidence of the alias is available on the CWGC website. We would wish to make this card 'findable' using either the name Robson, or the 'army' name of Storey. 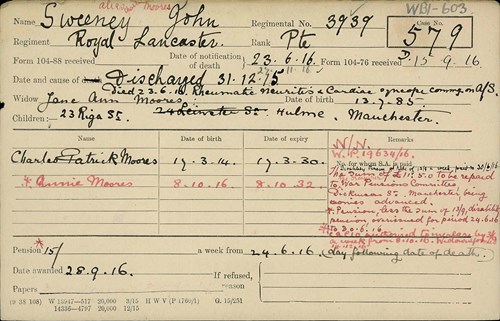 Above: The card for John Sweeney. The alias (Charles Moores) is recorded in almost impossible to read writing between his Surname and Christian name. Again, the alias is detailed on the CWGC web site. This was not originally tagged (indexed) as Charles Moore and it is envisaged that this would be able to be picked up from the project we are proposing.

Above: A close-up of the reference to the alias on the Sweeney card. 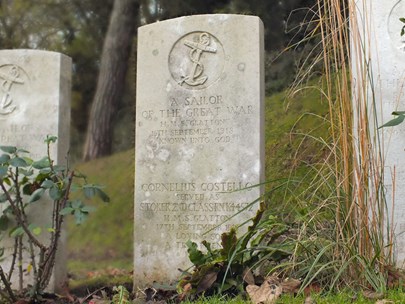 Above: the headstone for Cornelius Costello at Dover. He served as 'Snowball' in a particularly convoluted 'scam'. Again, this is fully recorded by the CWGC. His pension card is shown below. Despite the complicated back-story to Costello, the process to identify him as an alias and ensure his card is correctly indexed will be straightforward. 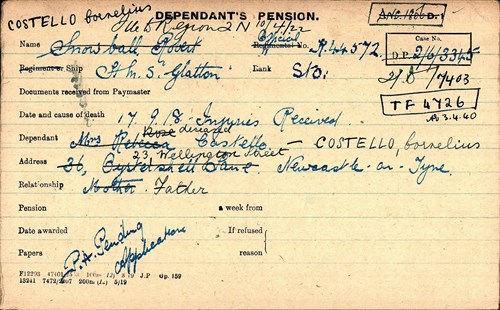 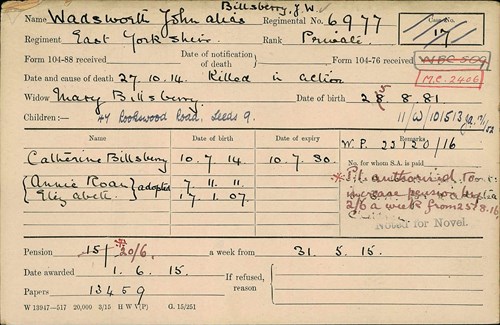 Above: A card for John Wadsworth of the East Yorkshire Regiment. His alias (Billsberry) is clearly shown on the card. However he is not recorded as an 'alias' by the CWGC. We need to ensure this - and other clearly detailed aliases - are picked up and recorded on Fold3. Because this alias is not recorded by the CWGC this aspect could be a potential part 2 to the proposed project.

What is envisaged here is a group of WFA volunteers coming forward (the numbers involved mean that about 50 volunteers would probably be able to do the bulk of the work within a few months). These volunteers will be allocated groups of aliases extracted from the CWGC. The card(s) (there may be more than one card) for each soldier need to be identified and checked. After checking, a database will be completed which will enable the 'alias' to be recorded.

In addition to this, any alias names found in the WFA pension records which don't appear in the CWGC database could be sent to the CWGC for possible inclusion in their records. This may form part two of the project.

By this method a far better overall picture of men who used an 'army' name instead of their 'real' name will be picked up. It is possible that from this further research will be possible into the subject, and it is very likely a spin-off from this would be some in-depth study into men who used an alias when serving in the Great War. However the main purpose of this exercise would be to make sure these men will be able to be much more easily found. This will be a lasting legacy 'in perpetuity' which current WFA members can bequeath to future generations.

Volunteers are needed. If you would like to take part in this truly unique and exciting project please get in touch via the email shown below.

How much time will I have to commit?

As much or as little as you like. In general terms, it is estimated that 50 volunteers putting in as little as two hours a week on average means the bulk of the work will be completed within four months.

How will the work be done?

A full instruction document will be written and a video guide will be prepared, but it really is quite simple.

Do I need to have access to the WFA's Library edition of Fold3?

Yes, but all WFA members automatically have this access to the pension records as part of the membership package.

[1] There are numerous reasons for men using aliases, such as re-enlisting after a previous period in the army, wishing to enlist while under age (or over-age), previous criminal convictions needing to be hidden, running away from a failed marriage. There will of course be many other reasons.

[2] This is an oversimplification because the 3,600 includes a number of men who are not recorded by the WFA's pension cards, these are mainly Canadian, Australian and New Zealand fatalities who would not have been awarded a UK pension.

[3] The failure to index these names is actually not surprising in many cases because the alias is often unclear on the card.