The liner Transylvania was completed just before the outbreak of the First World War and was to have served the Anchor Line, which was a subsidiary of the Cunard Line.

Transylvania was taken over for service as a troop transport on completion and the Admiralty fixed her capacity at 200 officers and 2,860 men plus her crew.

On 3 May 1917 she left Marseilles for Alexandria with an escort of two Japanese destroyers, the Matsu and the Sakaki. 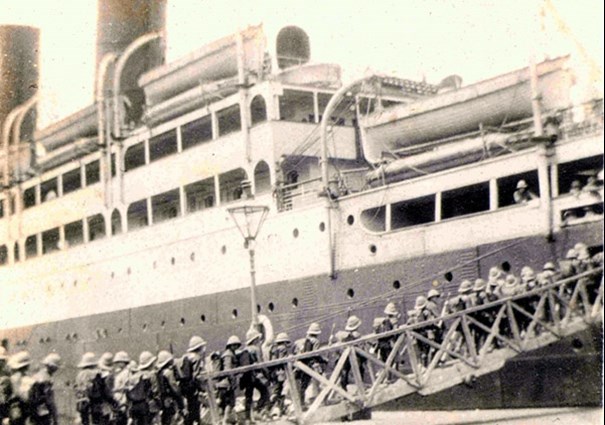 Above: This photo is believed to be troops boarding the Transylvania possibly at Marseilles 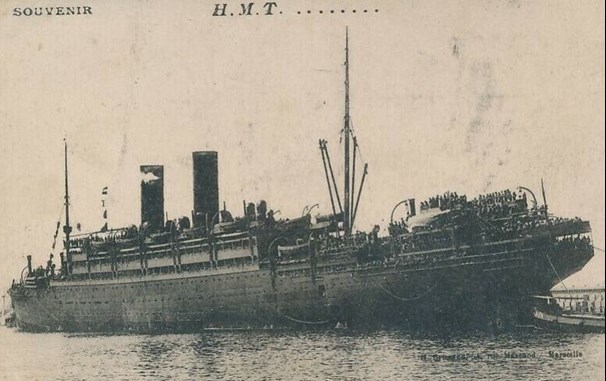 Above: Again, this may show the Transylvania at Marseilles 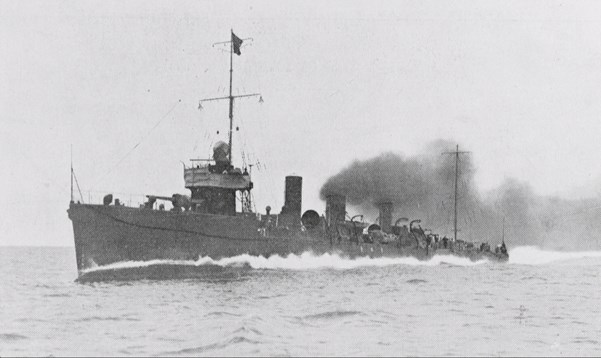 Above: Sakaki during speed trials in 1915 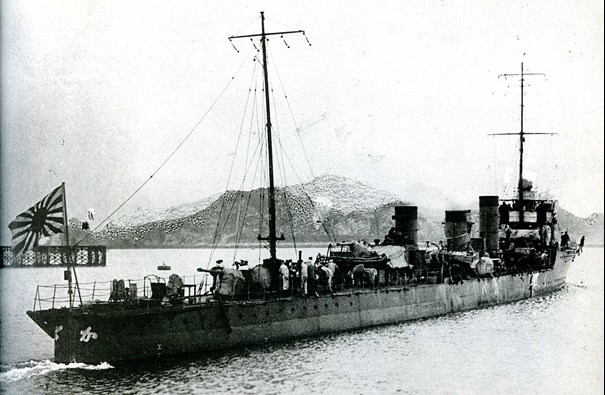 Above, Kaba (in a post war image) was the same class of warship as Sakaki and Matsu

At 10 am on the 4th the Transylvania was struck in the port engine room by a torpedo from a German submarine the U-63 whilst on a zig-zag course at a speed of 14 knots. At the time she was South of Cape Vado in the Gulf of Genoa.

Transylvania at once headed for the land only two miles distant.

The Matsu came alongside to take off the troops, whilst the Sakaki manouvered to keep the submarine submerged. Twenty minutes later a second torpedo was seen coming straight for the destroyer alongside, which saved herself by going astern at full speed. The torpedo then struck the Transylvania and she sank very quickly, less than an hour having elapsed since she was first hit.

There were many acts of gallantry.

Maj Thomas Hubert Barclay of the 1/1st Surrey Yeomanry died from exhaustion after saving many lives. 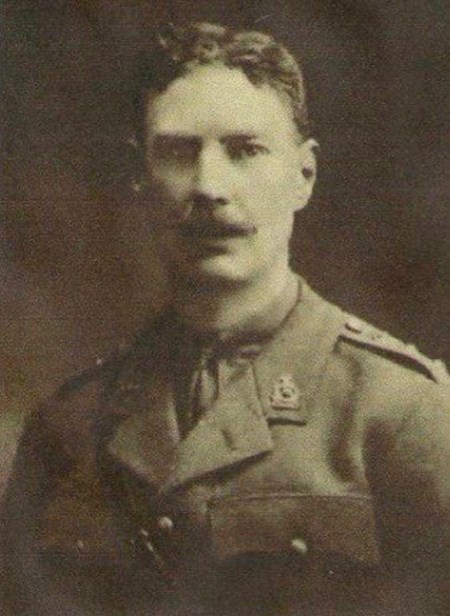 Major Barclay managed to get clear of the ship as it went down. He was a good swimmer and could have saved himself but chose to stay in the water to help others. He and Captain R.A. Hill swam alongside a raft bearing three men who could not swim. They tried to support the men; twice the raft capsized in the very rough sea and they were able to right it, but it capsized again and this time the men disappeared. Capt. Hill was picked up unconscious. Major Barclay was rescued by an Italian tug after being in the water for 3½ hours, but died from exhaustion. He was posthumously awarded the Board of Trade Silver Medal for Gallantry in Saving Life at Sea.

Above: Board of Trade Medal for Gallantry in Saving Life at Sea

Another survivor was Philip (Fip) Murphy, a recently qualified Doctor in 1917. He was a Lieutenant in the RAMC and was posted to Alexandria two letters survive, the first was written to his younger sister

We left this harbour on the evening of the 3rd on a very large transport having on board a living freight of roughly 3,400 souls. Everything went well until the next morning at 10am when the good ship got her first torpedo about midships.

I had the good or bad luck, just as you like to call it, to be on duty on that side & saw the cursed torpedo come towards us from about a distance of 300 yards. It appeared, to me, to come exceedingly slowly. At first I could not believe my eyes but very soon I realised that what I saw was only too real. Thus I stood for quite an appreciable time my gaze attended to the line in the blue sea by a peculiar fascination. When it did strike & explode, I felt little or no shock except for a great shower of water.

This shot unfortunately got us in the engine room, with the result that, although we were only 5 miles off shore, we came to an almost immediate stand still. It therefore came as no surprise to us when 10 mins later we got our second present from the Hun in the shape of another torpedo that just missed a destroyer that had come alongside to take men off.

The nurses and sisters (69) got off in the first boat & thank God came through without a scratch. Fortunately for everyone the good old ship did not take the final plunge for an hour & a half after being struck & to this alone is due the comparatively small loss of life"

This to his Mother:

Even after my rescue I did not realise the gravity of my position & in fact it is only now that I am beginning to see the great danger I was in. Now when I come to review the things that occurred on that eventful morning, & especially consider that I was about 3 hours on a raft not much larger than your wicker card table. The sea was pretty calm during the early hours of the morning & even so after the torpedoes struck us, but towards noon (a few hours after the accident) when we were all on boats, rafts etc it became rather rough with the result that I was continually thrown off my raft; but fortunately God was good to me and I usually came up within easy reach of it. On my raft were 1 major, 3 captains for about two hours. After an extra big wave we parted company but the raft & I still stuck together with the addition of two soldiers from another raft. Afterwards I was picked up by a tug boat from the port of refuge & the first person I saw was the major dead, one of the captains in a collapsed condition & the other unfortunate captain has not been found so far as I know"

The above accounts courtesy of The Great War Forum:  www.greatwarforum.org/topic/199016-ss-transylvania

Another fatality of the sinking was Captain Charles Pope of the RAMC. He was one of eleven brothers and four sisters, all of whom (except one brother predeceased) fought or worked for their country in the Great War. His body was never identified and is therefore commemorated on the Savona Memorial. 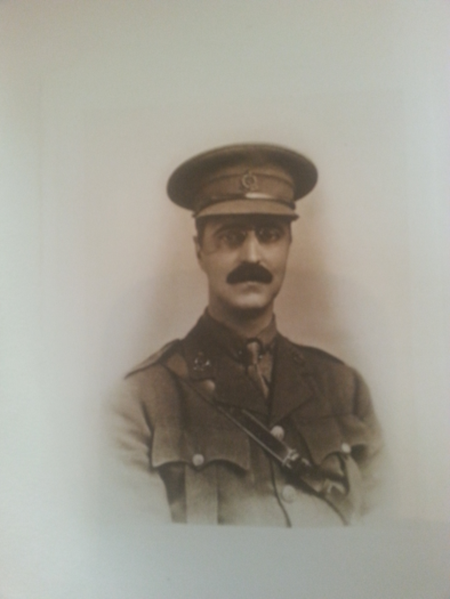 The Pope family held out the hope that Charles might have been among those saved, writing many letters of enquiry, but after an agonising four and a half month wait, his wife received the following letter from the War Office:

The Military Secretary presents his compliments to Mrs Pope, and regrets to inform her that in view of the fact that no further information has been received concerning her husband, Captain C.A.W. Pope, R.A.M. Corps, who was reported “missing, believed drowned” on the 4th May, his death has now been accepted for official purposes as having occurred on that date.

The Military Secretary is desired be the Secretary of State for War to express his deepest sympathy with Mrs Pope in her sorrow.

One of the sergeants under his command wrote:

When the ship was hit I was with Captain Pope in the ship’s hospital. After seeing the patients safe we went to the parade deck. Shortly afterwards we heard that several wounded were below, so Captain Pope went with a party of men to try and rescue them and dress their wounds – and thus he died the death of a British Officer and Gentleman – at his post.

Another member of the R.A.M.C. who was the last to see him wrote:

He was in charge of us on the Transylvania and was missing when we landed. He dies as every Britisher likes to die –doing his Duty, and went down with the ship whilst dressing the wounds of the poor fellows who were hit by the explosion. I happen to know this as I was working with him up to about three minutes before she sank, when he ordered me over the side. He was a good officer and we are all sorry to lose him.

The award of an Albert Medal was made to James Magnusson of the Auckland Mounted Rifles, N.Z.E.F.  The citation for his award reads as follows:

Magnusson, who was on the deck of the Transport, saw an injured soldier struggling in the water, and immediately dived overboard, although there was a very rough sea, swam to his assistance, and succeeded in placing him in a boat. Magnusson then returned to the sinking ship and rejoined his unit. His life was lost. 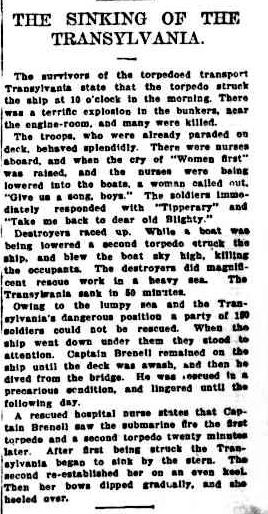 Above: The Sydney Morning Herald of 26 May was just one of the newspapers that ran details of the tragedy.

Lt Breuell, the master of the vessel one other officer and ten men of the crew, 29 military officers and 373 other ranks were killed. Breuell is buried in Savona Town Cemetery.

Funerals took place in the town of Savona over the course of the following days. 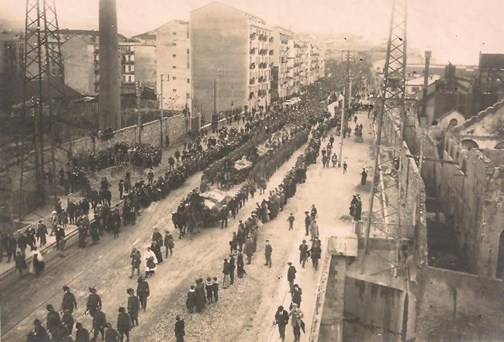 Above and below: funerals of those lost on the Transylvania (again, courtesy of 'Kenora' on the Great War Forum) 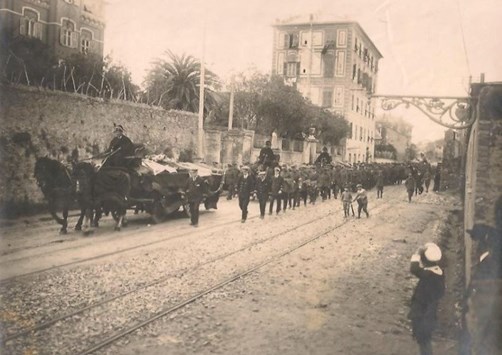 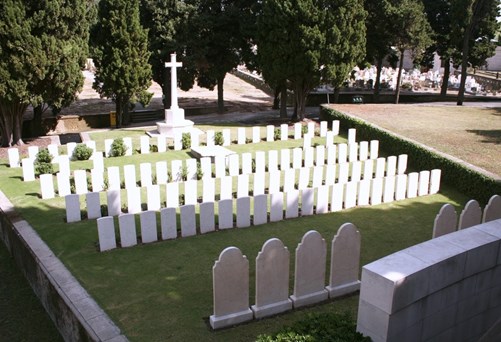 Above: Savona Town Cemetery and Memorial. (c) CWGC 2021 The memorial lists 274 who lost their life and whose bodies were not recovered or identified. Others are buried elsewhere in the area. 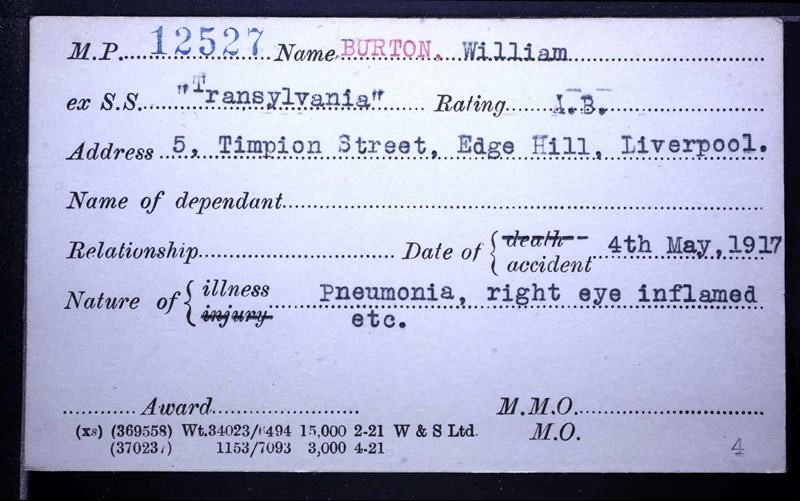 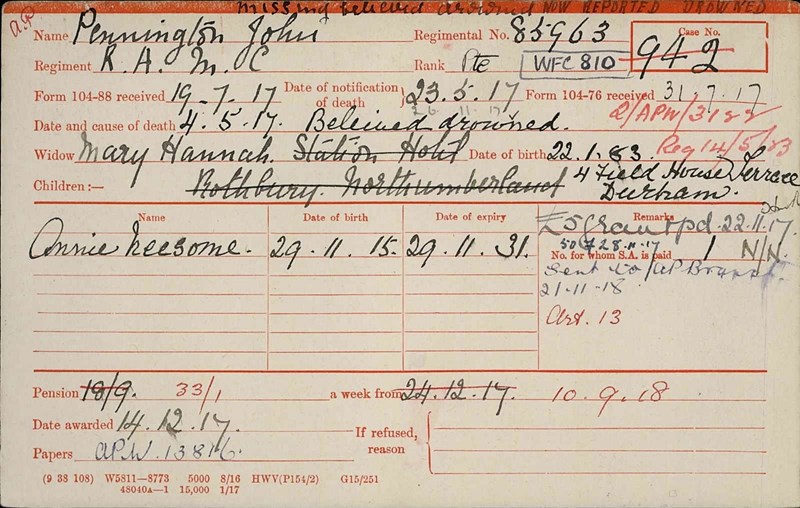 Above: There are numerous records of men from the Transylvania within the WFA's Pension Records

In October 2011, the remains of the sunken ship were discovered near the Ligurian coast. For years, the Carabinieri had been examining eye witness reports, trying to determine the location of the Transylvania.