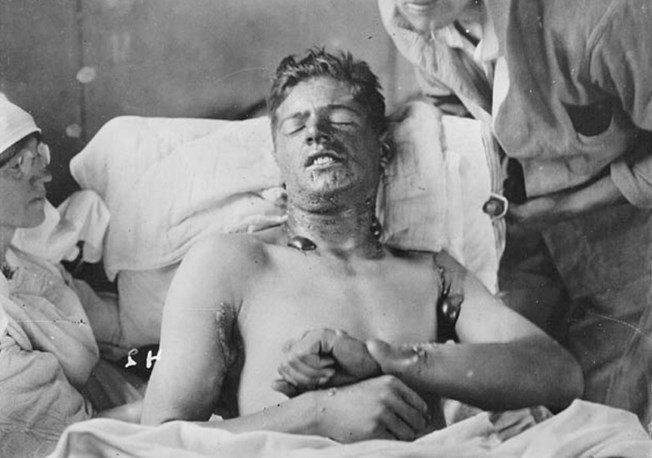 In early 1915, accounts were freely circulated in turn by the French, British and Germans that poisonous gas was being used as a weapon of war by their opponents on the Western Front. This was in clear contravention of the 1899 Hague Convention on this subject. The Germans were particularly emphatic about the use of war gases. They categorically stated that even at the outbreak of war the French had 30,000 shells in their arsenal carrying a poisonous gas derived from bromine, and that in April 1915 the French Army had specifically launched projectiles containing poisonous gas on the German sectors in Champagne, Verdun, the Meuse/Moselle rivers and Ypres between 13 and 15 April 1915. The Germans also accused the British of using similar gas projectiles at Ypres on 15 April. Facts that emerged, after the war, confirmed that the French had indeed used hand-grenades (originally produced for the French gendarmerie) containing a tear gas - ethylbromacetate - on their sector of the Western Front. However, it was also claimed that, from October 1914, the Germans themselves had definitely employed a skin and mucous membrane irritant - dianisidine chlorosulphonate - which was included in shrapnel shells fired in the British Neuve Chapelle Sector. Confirmation was also obtained that in January 1915, Dr Karl von Tappen of the German War Ministry had formally suggested that the German Army could obtain a significant war-winning shock effect by using a tear gas called xylyl bromide in artillery shells, and this chemical agent - T Stoff (Tappen‘s agent) - was duly formally approved by the German Army as a potential weapon of war for use against the French and British Armies on the Western Front. Regardless of these accusations, allegations and insinuations, there is no doubt that the first operationally significant use of a chemical agent on the Western Front in the form of a poisonous gas was carried out on the 22 April 1915 by the German Army. It was deployed at Langemarck in the Ypres Salient against formations of the British, French and Canadian troops concentrated in trench works. Paradoxically, because the German war-economy in 1915 was suffering from a chronic shortage of shell-making steel, the means of the dispersal of the gas was via gas piping connecting 190-pound pressurised steel gas cylinders. In all 6,000 cylinders were used releasing 160 tons of the gas. In a light breeze this produced an optimal concentration of 1 part of the gas per 1,000 parts of ambient air to provide a slowing moving wall of ground-hugging gas 6km wide and 1km deep. The stability of the column of poisonous gas was, of course, always susceptible to other possible variations in the ambient meteorological conditions. However, the gas dispersed at Langemarck was not one of those mentioned above, but the then relatively well known highly toxic industrial gas, chlorine. In contact with moist skin or mucous membranes, the chlorine gas was converted to hydrochloric acid (HCl) - a liquid that was a highly toxic and caustic irritant. (The first retaliatory British poisonous gas attack, against the Germans, was at Loos on the 25 September 1915 using 150 tons of chlorine gas piped from 5,500 steel pressurised gas cylinders).

During the war on the Western Front a considerable array of poisonous gases were produced by the belligerent nations, but by no means did all of them prove practical in deployment under operational conditions. Germany was by far the most active in this sphere of warfare. The four most common types of war gases that were developed during the Great War - grouped by mode of action (but not necessarily by magnitude of use) - were: Asphyxiators: irritated the lungs, flooded them with body fluids and prevented the transport of oxygen in the blood. They caused acute bronchitis and, often, pneumonia. Lachrymators: produced inflammation of the eyes and excessive tears effectively blinding the victim in, at least, the short-term. Sternutators: produced fits of sneezing, vomiting, and severe nausea. Toxins: compromised the action of the body's tissues and organs. Vesicants (known as "blister agents"): initially irritated the mucous membranes followed by various degrees of blistering of the skin. They were also long acting with no effective remedy. The gases most commonly deployed on the Western Front were: Chlorine (Asphyxiating). Phosgene - faster acting than chlorine. (Asphyxiating). Chlorine combined with phosgene; even faster acting. (Asphyxiating). Mustard - principally used by Germany. (Vesicant).ch

Alternative means of deployment of poisonous gas on the Western Front

Throughout the Great War, the British Army stubbornly used their specially created and dedicated ‘Special (Gas) Companies' for pressurised cylinder gas dispersal on the Western Front; even going to the extent of mounting the dispersal apparatus on railways wagons and putting out such huge volumes of gas that in certain sectors the gas penetrated into the German homeland itself. However, from 1916 onwards, once the supply of shell-making steel became more readily available to the German munitions industry, there was ever increasing trend towards the delivery of poisonous gases by various projectiles. It relieved the users of the need for a favourable wind (and in the Germans' case the prevailing wind was almost always in the wrong direction (ie from the West) and allowed the almost pin-point targeting of the toxic gas on enemy troops. Moreover, whilst the cylinder gas technique produced a dense and widespread dispersal of a gas, it did not always reach the intended target areas. But, such was the accuracy of the gas projectiles that whole areas became saturated with poisonous gas - eg mustard - and became virtually untenable for considerable periods without exhaustive use by the troops on the ground of protective clothing and high specification gas-masks. By preference, the Germans and French, and to a certain extent the British, used howitzers for their gas-filled shells as these artillery pieces had steeper angles of inclination giving the plunging shell-fire which was more effective on trench works and dug-outs. But the British, whilst remaining committed to a considerable extent to their Specialist (Gas) Companies' pressurised steel, gas cylinder based technology, avidly sought other, cheaper, mass production methods for poisonous gas delivery. After various experiments and battlefield trials, a device called the Livens Projector was successfully tested on a large scale at Thiepval and Beaumont Hamel in September - November 1916. Basically a mortar, the Projector was a steel tube about 3-feet long and 8-inch in diameter and weighed a readily portable 100-lb. They were was embedded in the ground, in lines or groups, right behind the British front-line and installed at an inclination of 45 degrees facing the German target areas, with a maximum range of 1,500 metres. A remotely activated black powder, or cordite, explosive propellent-charge then hurled the primed 30-lb gas canisters at the German lines, which burst on contact, to effectively penetrate the German defences. Although the Projector had limited accuracy, it was so cheap and dispensable that hundreds, and later thousands, could be amassed to fire simultaneously and achieve the required effect, i.e. saturating the target with poisonous gas.

Whilst there is a general consensus that poisonous gas - particularly mustard gas - was the major bane of all the armies on the Western Front, the mortality rate was relatively low representing only 3% of the one million British gas cases on the Western Front. However, the disability caused by gassing was often long-term, highly distressing, without any really effective treatment, and often necessitating a long convalescence. Around 100,000 British soldiers were permanent disabled by poisonous gas and, in others, a degree of disablement persisted until long after the end of the Great War. Indeed, it was often stated as a contributory factor in the post-war deaths of many veterans of the Western Front, from both sides, even in old age. However, the rapidity with which the belligerent armies learned to deal with the various poisonous gases was quite extraordinary. The ever meticulous Germans routinely marked their poisonous gas shells with a coded system of coloured crosses - ie green, blue and yellow - which co-incidentally and fortuitously allowed the British and French to readily identify the gas used in the shells and enabled them to take appropriate protective measures. (The British Army also used a star coding system - eg red for chlorine - but in this case its use was to primarily obscure, even from the ‘Specialist' soldiers deploying it, the nature of the Beast. It was also code-worded as ‘The Accessory' as the military was forbidden to use words like ‘poisonous gas' or ‘toxic gas' in spoken or written communications). After a rather fraught period of using anti-gas measures such as: simple cotton mouth-pads, (soaked in a solution of sodium bi-carbonate); goggles; experimental impregnated gas-helmets, hoods and primitive gas-masks of increasing efficacy, the British introduced a standard military gas-mask - the Small Box Respirator. It was worn readily accessible on the soldier's chest and proved to be particularly effective when the troops had learned the necessary ‘gas discipline' to use it to its maximum effect. Consequently, although poisonous gas was considered by all the belligerents to be the basest of all the weapons of war, it never lived up to the war-winning shock tactic that von Trappen and the German High Command thought it could be. All-in-all, the Germans used 70,000 tons of poisonous gas on the Western Front against a combined total for the Allies of 65,000 tons. The British only used poisonous gas in 50% of their projectiles, whilst indigenously produced mustard gas was only deployed from September 1918 (in the St Quentin Sector) and by then, due to the resumption of more open warfare, deployment of poisonous gas had become much less efficacious. Prior to St Quentin the British had on occasion used mustard gas captured from the Germans. Production of the Livens Projector during the Great War was 140,000 units and 400,000 matching poisonous gas canisters. Both the German and French eventually also produced and deployed their own versions of the Livens Projector, but less successfully.

This article was first published on a previous version of The Western Front Association website : 24 April 2012