Some audience members have made the mistake of expecting a ‘World War I Saving Private Ryan (1998).’ A film which would ‘do for the Great War what Platoon (1986) did for Vietnam.’ The race against time plot device has also compelled comparisons to Christopher Nolan’s Dunkirk (2017). It is natural to seek likeness within any artform or genre. But it eventually becomes a game of apples and oranges. 1917 is 1917 – just as those aforementioned films are unique in their many facets. Furthermore, 1917 is not so much a film about the Great War as it is the story of two men experiencing it. A realisation discovered as the mission unfolds with each muddied step.

Much word has been offered about its unusually bold ‘one-shot’ approach. Some critics claim it as utterly immersive. Others dismiss it as snake oil. I find myself firmly in the former category. My introduction to this technique was Children of Men (2007) which brilliantly used the single-take to capture the horrific brutality of a precipitously unravelling civilisation. Again, I was enthralled by Russian Ark’s (2002) existential discourse on three centuries of Russian history over a truly uncut 96-minute long take. In 1917, I found a similar high artistry and technical mastery with practically invisible cuts on display using the one-shot perspective. However, it did not steal the show from the script nor the characters. This was aided by casting two acting leads whose deeply convincing performances hide the nascence of their careers. An ensemble of more renowned talent briefly punctuates their odyssey and seamlessly enhances the stakes. The grip of my wife’s hand in mine during the final act of the film confirmed that I was not alone in my immersion because of the ‘one-shot.’

The intricacy of its authenticity evokes a similar sense place and time. The level of detail in kit, activity, parlance, and customs of the British Expeditionary Force (BEF) is admirable. This is in no small part due to the quality of those who consulted the film and the passion of its producers to ‘get it right.’ But it is not a documentary; another strange expectation made of historically set films based on truth. 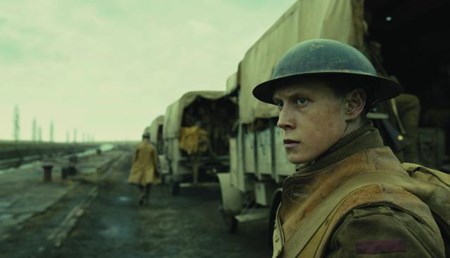 The battalions are real, as are the locations on the southern Arras battlefield during the historical German strategic retreat to the Hindenburg Line. But the depicted British units did not exactly fight at those particular coordinates shown. And Benedict Cumberbatch’s Lt. Col. Mackenzie of the 2nd Devons was in fact Lt. Col. A.J.E. Sunderland, etc. It is a composite of Great War BEF experiences, a style oft used by many of the war’s great poets and memoirists. Rifleman Mendes and other messengers are represented in our heroes Blake and Schofield. The important realities, thus, are captured to tell a story. We are not spared the grim detritus of no man’s land nor the agonies of the Casualty Clearing Station. Nor the Tommy’s agitation with trench traffic, his wonderment at aerial combat, the jarring rattle of his lorried transport, nor his love of song, sarcasm, and crude mirth. He is fully human. 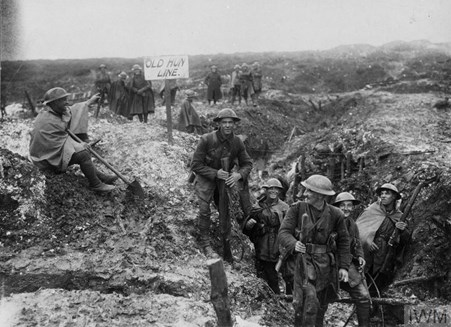 IWM Q 1788: British troops in a captured German trench ('Old Hun Line') at Serre, March 1917. Serre was occupied by men of the 7th, 9th and 62nd Divisions on 25 February 1917 during operations on the Ancre, the preliminary stages of the German withdrawal to the Hindenburg Line. 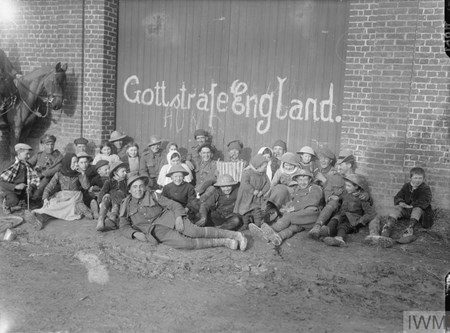 It must be remembered then that 1917 is drama of the highest calibre. To see a major feature film set in this time and place with such fidelity to the subject is rather impressive. To have it treated by such an introspective and talented team is miraculous. And there I shall admit bias – apart from the film’s topic and setting. Sam Mendes (direction), Roger Deakins (cinematography), and Thomas Newman (score) have worked on many of my favourite films, individually or in collaboration: The Shawshank Redemption (1994), American Beauty (1999), Road to Perdition (2002), No Country for Old Men (2007), Skyfall (2012), Sicario (2015), Blade Runner 2049 (2017). 1917 reunites them for the second time since Skyfall with a film worthy of inclusion amongst those previous masterpieces. I no longer need wonder how they might lend their immense talent to tell an honest tale about the Tommies on the Western Front. And I am more than satisfied. Above all, I believe Rifleman Mendes and his chums would be too.