Celebration the 100th Edition of 'The Camera Returns'

Celebrating its 100th instalment over 33 years, ‘The Camera Returns’ has become the most enduring feature of the journal of The Western Front Association. 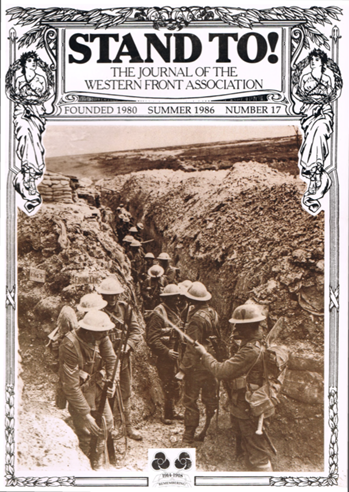 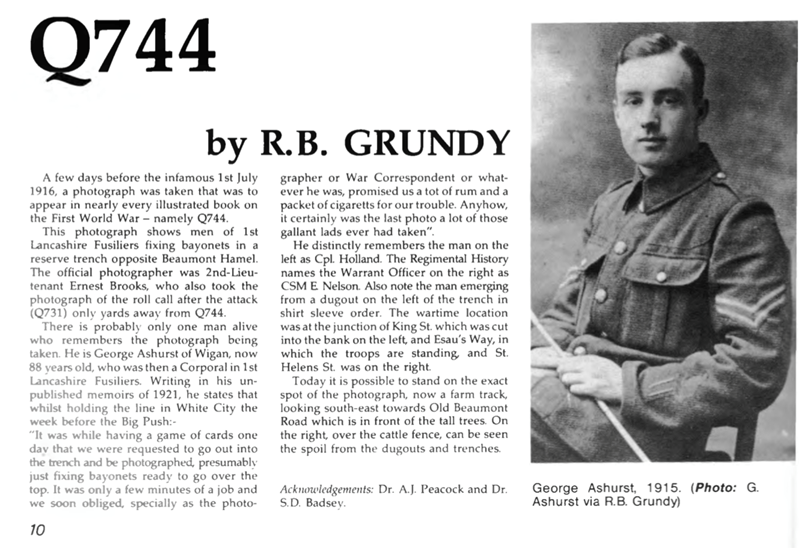 The authors Bob Grundy and Steve Wall remarked that ‘One of the fascinating aspects of being interested in the Western Front is that one can compare photographs taken during the war with one's own taken today.’ Their inspiration was the three volume 1938 publication, Twenty Years After edited by Sir Ernest Swinton. Inspired by these and the earlier Michelin Guides of 1919 Bob and Steve set out to find the exact location where a photograph was taken. 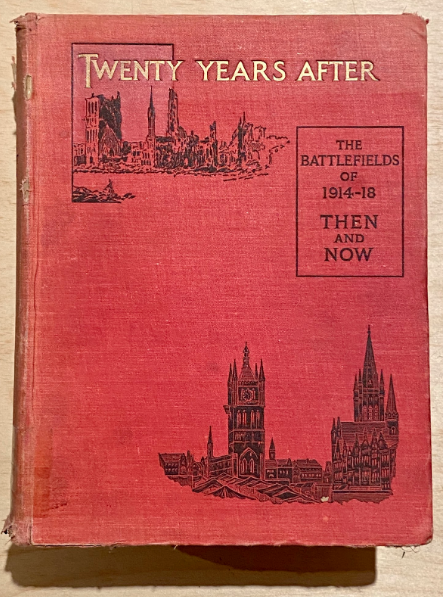 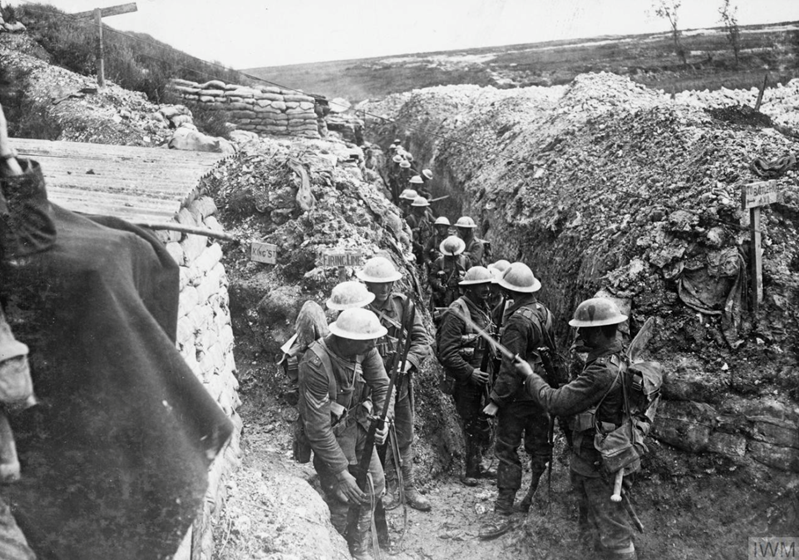 On reading this in Stand To! Steve Wall immediately made contact with Bob and discovered that they both had similar interests. Bob and Steve probably made their first trip to France the same year, they don't rightly recall, as the first 'The Camera Returns' appeared in Stand To! 19, Spring 1987. Writing in 1987 Bob and Steve hoped that with ‘some photos that up to now have never been compared’ that ‘The Camera Return’ would become a regular feature in Stand To! It has of course become a regular feature ever since. 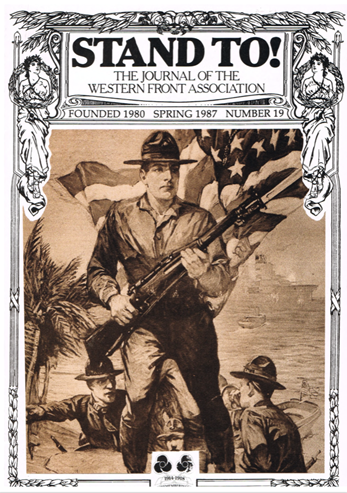 One of the fascinating aspects of being interested in the Western Front is that one can compare photographs taken during the war with one's own taken today. In the 1930s, Newnes published three excellent volumes called Twenty Years After and armed with these and the earlier Michelin Guides of 1919, one can find photographs showing unfamiliar locations.

Finding the exact spot from where the war-time view was taken is, in some instances, impossible due to the total lack of reference points such as woods, villages, etc. These must remain images of mystery. However, some photos that up to now have never been compared, will, we hope, be a regular feature in Stand To! The first is Imperial War Museum photograph Q10 which is supposed to have been taken on 1 July 1916. It is a splendid photograph showing shells falling on the German trenches which were attacked by the 36th Ulster Division on that fateful day. The photograph was taken from high ground just behind the British front line, looking over the Ancre Valley. A support trench can be seen in the foreground of the ‘then photograph. On the ‘now’  illustration, it is a farm track leading to the village of Hamel.

Both British and German trenches run diagonally across the plates from right to left starting in the centre.

The position of the German trenches in the upper left can be traced by the chalk in the ‘then’ photograph which has also been uncovered by ploughing in the ‘now’ view. To the right of upper centre in the ‘now’  photograph, the Mill Road with, behind it, the Ulster Tower (partially blocked by trees), can be seen clearly. This was in noman's-land. The British front line followed the tree line of Thiepval Wood seen in the top right hand comer.

On 1 July, the Ulsters succeeded in crossing no-man's-land and capturing the German front line and the Schwaben Redoubt located just behind where the Ulster Tower now stands. They also captured parts of the German second line trenches, the only Division to do so that day. However, the gains were short-lived. Because of the failure of the 32nd Division on their right, it was found virtually impossible to get reinforcements and ammunition across no-man's-land due to heavy machine gun fire. Thus, in the evening the Ulsters were forced to give up the Schwaben Redoubt and retire to the original German front line. Ironically, as they fell back, they met the reinforcements for whom they had been waiting. It was three months before the redoubt was eventually captured. 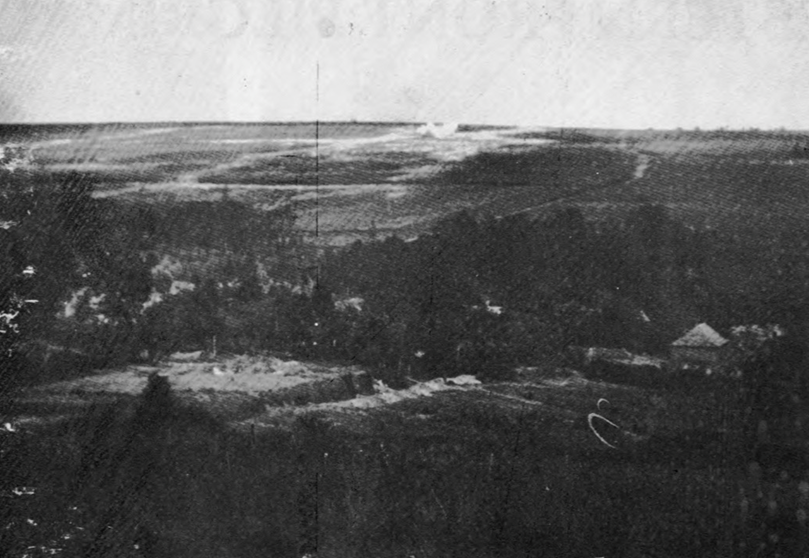 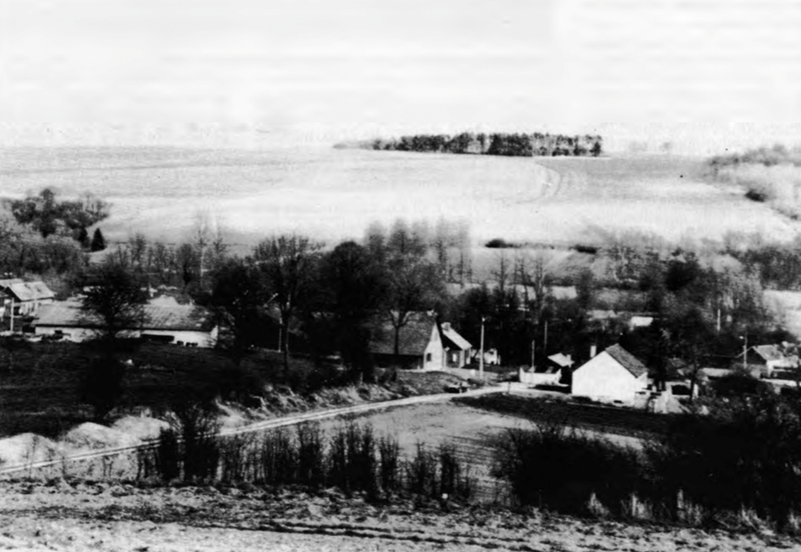 Steve remembers the first trips as one day affairs, with Bob travelling down from Wigan to pick up Steve from his then home in Hertfordshire. A lot of driving, very little sleep, but highly enjoyable. Slightly longer trips followed, memorably camping near Cambrai, in the snow, in February and especially as Bob had forgotten to bring the poles for his tent! Now older and wiser we stick to the comfort of B&Bs, most notably being that belonging to Avril Williams of Auchonvillers.

As this was before the advent of the Internet all photographs had to be viewed and then ordered from the Imperial War Museum. A lot of time was spent ‘trawling’ through countless albums of photographs, selecting a dozen or so and then waiting three or four weeks for the prints to arrive. Obviously we didn’t know if we would be able to find the ‘now’ locations but there was definitely a great feeling of satisfaction and achievement when we did, especially when a lot of ‘searching’ was involved.

The Internet now provides an unlimited source of photographs, not only from the Imperial War Museum, but equivalent museums across the world. In addition one can now search for other photographs taken at the same time or same place.

Writing in Stand To! No. 20 Summer 1987: The Camera Returns (2) South of the junction for Carnoy on the Fricourt Mericourt Road D938

In our second comparison, we return to the Somme. Imperial War Museum photograph Q4201 is captioned ‘men of the 16th (Irish) Division going back for a rest after the taking of Guillemont on 3 September 1916.’ The village was first attacked by the 2nd and 55th Divisions on 8 August but, as stated in the caption, was only finally eared on 3 September. Some of this fierce fighting is admirably described in Ernst Junger's classic Storm of Steel. The photograph was taken looking north west of the track south of the junction for Carnoy on the Fricourt Mericourt road D938.

On either side of this road was a camp known as ‘Minden Post’ which was used as an advanced dressing station during the opening stages of the Somme offensive. Shown in the war-time photograph are Wolseley CR6 three ton lorries fitted with Vickers 34 hp engines. The 16th's Shamrock divisional sign can be seen on the side of the leading lorry although, according to Mike Chappel's excellent British Battle Insignia (1): 1914 -18, they also used the initials of their GOC, Lawrence Parsons, as a sign on their transport. In the foreground stands a BSA 4 hp motorcycle. A fascinating photograph which poses the question, "If the men are coming back from battle, why are the trucks pointing towards Guillemont?"

Our comparison photograph for this issue comes yet again from the Somme - no apologies! IWM photograph Q883 taken in August 1916 shows the area between Mametz and Fricourt, the photograph looking north west along the D64 towards Fricourt. By August the Battle of the Somme had moved on three miles but the roads needed to support the offensive had to be maintained, in this case by the traditional method of pick and shovel. The men shown belong to a Labour Battalion. These units were usually composed of men older than those found in normal formations although the manual work they were asked to do was arduous. At first Officers posted to these units were somewhat contemptuous towards their men as they were considered to be low grade soldiery. The work done by these men contributed in no small way to the scheme of things. Indeed if they had not been there to do tasks such as this no doubt more pressure would have been heaped upon the infantry units "resting" in the rear areas. Note that on the left of the wartime photograph, telegraph poles have been erected and linesmen are at work stringing wires. On the original photograph the wires can be seen on the ground. Where possible in the forward areas they would be buried as deep as practicable. The roads in the Somme area have hardly changed since the War although in the past two years this particular spot has been much affected by road improvements. 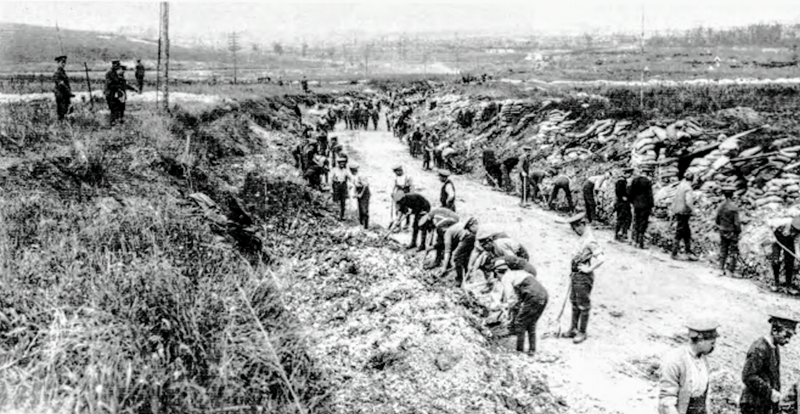 IWM photograph Q883 taken in August 1916 shows the area between Mametz and Fricourt, the photograph looking north west along the D64 towards Fricourt. On the original photograph the wires can be seen on the ground. Where possible in the forward areas they would be buried as deep as practicable. 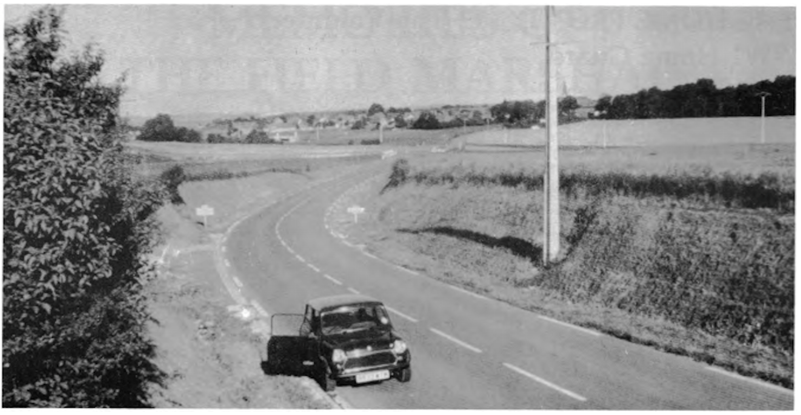 The roads in the Somme area have hardly changed since the War although in the past two years this particular spot has been much affected by road improvements.

It is still possible to pick out the bend in the road, the bank and an electricity pole and Fricourt on the horizon. Of course, Google Street View now helps Bob and Steve recce the sites on the Internet in advance before they visit them, which means they no longer experience quite the same thrill of the moment of finding the locations. However, they recommend such trips as "there is nothing better than travelling to the battlefields and standing in the footsteps of our forefathers". 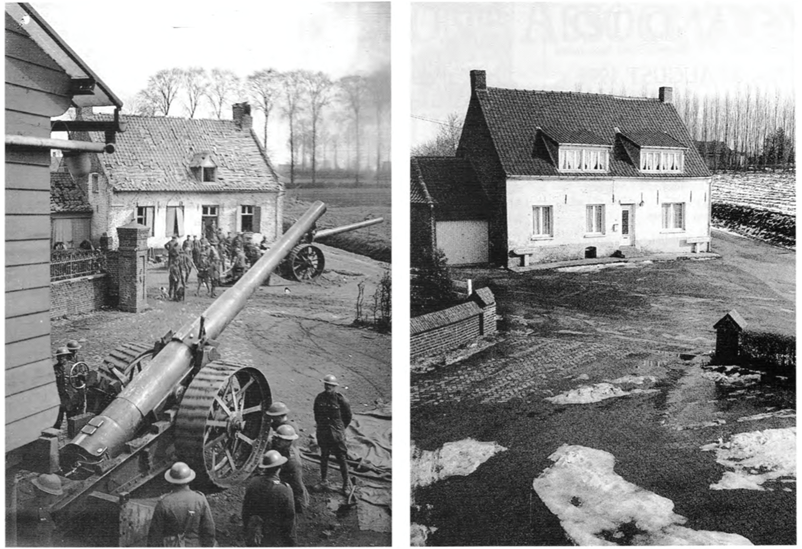 The Camera Returns (23) Bank of the Scarpe at Blangy

The Camera Returns team visited Blangy in 1994 (Stand To! No.41 : Summer 1994) and demonstrated that very little had changed in the intervening 77 years. However, a look now on Google street view’ and the viewer will see that although still recognisable, the area is now being developed into an attractive shopping district. 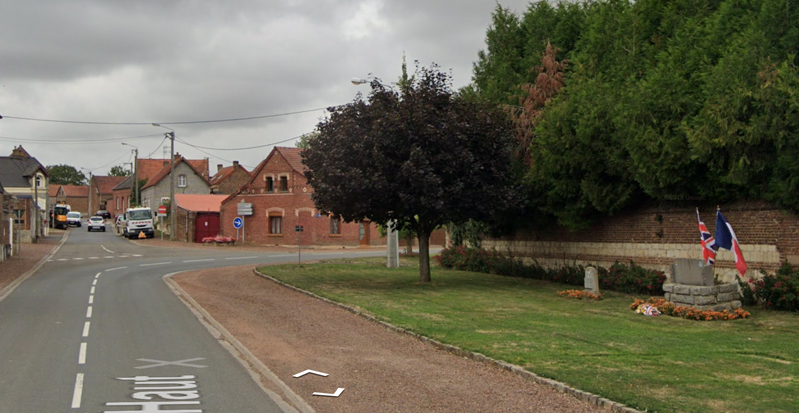 Camera Returns 38, published in 1999, again took a lot of legwork to find the exact location but proved it is possible with a bit of patience and tenacity. 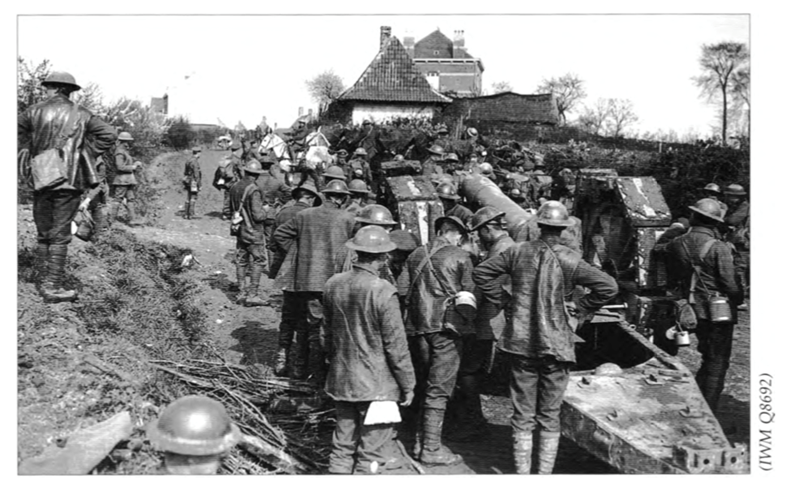 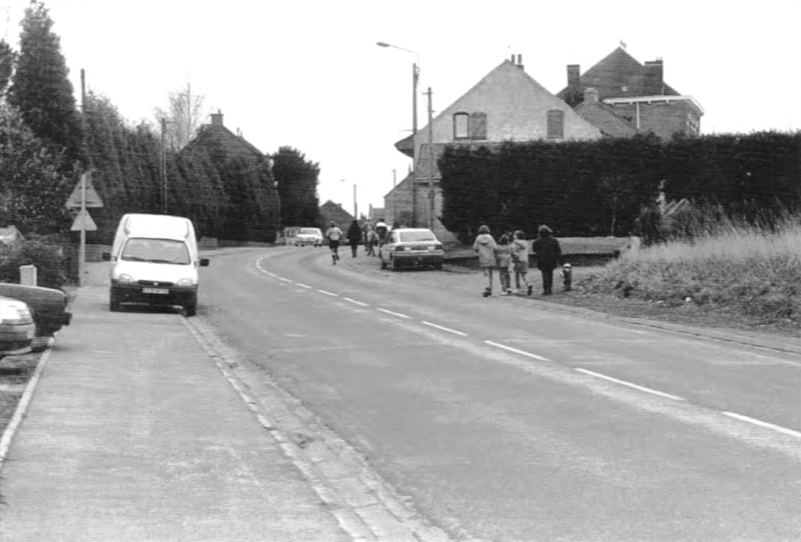 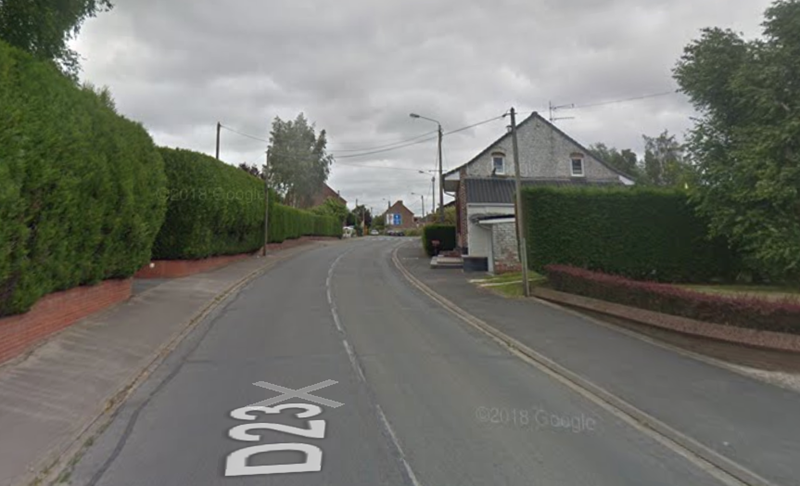 For those who would like to have a go, have a look at Q8623 in the IWM Photographs. Then open a new browser page and search for Henencourt in Instant Google Street view. You may be pleasantly surprised! 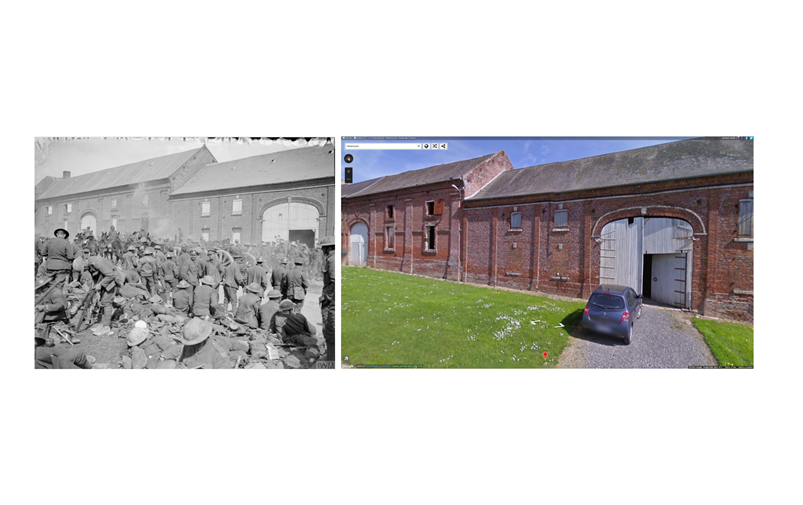