Childhood memories of Gallipoli in the 1920s

The passion of members of the Western Front Association is such that few fail to recognise an important historic account when they come across one – and thanks to member Edward Lever, a rare first-hand account and photographs of early commemorative work and commemoration at Gallipoli would be recorded for posterity.

As part of our ongoing exploration of the WFA archive to mark our 40th anniversary, here we provide edited extracts of an item written by Edward, of St Ives, Cornwall, that first appeared in an edition of the Bulletin in 2001. In the article Edward shared memories of an old friend (89-years-old Mrs Jo Wadeson) who had spent two years of her childhood on Gallipoli with her father - a surveyor employed by the Imperial War Graves Commission…

Joseph Robert Salmon, Jo’s father, was born in 1887 and went on to study architecture. A sergeant with the Cheshire Yeomanry, he was called-up as soon as war was declared and saw service from the first to the last day of the conflict. 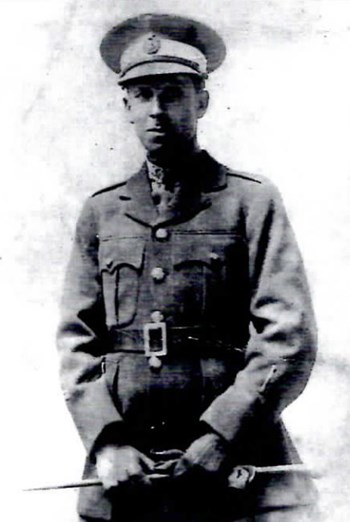 When the Yeomanry was dismounted in September 1915, he was transferred to the Labour Corps where his surveying skills were of obvious value. In 1917, he was sent for officer cadet training and would end the war as a captain.

Wounded in action, Joseph was still suffering from his wounds when discharged in November 1919. Like many of his colleagues, he found work hard to come by - until an application for a position with the Imperial War Graves Commission was to prove successful.

In the spring of 1920, accompanied by his wife Madeleine and their eight-year-old daughter Jo, he joined the Orient Express for a five-day trip to Constantinople. This was the first part of the journey to his new posting as IWGC surveyor for Gallipoli.

The Ottoman Empire was almost at the point of disintegration at the time the Salmon family arrived in Turkey and lay in their hotel for two nights listening to the sound of gunfire in Constantinople each night. Unsurprisingly, they were pleased to escape this and embark on a Greek ship heading to Chanak on the Asiatic shore. Next stop would be the Dardanelles.

Joseph and his assistants, along with their families, were housed in a small compound of five bungalows adjacent to a similar site occupied by British Army families. The complex was guarded every night by armed Turkish guards as the area was troubled by brigands who were living in the inhospitable terrain.

Whether working inland for the graves commission or heading off on twice-weekly shopping trips to Chanak for essential supplies, the Brits were always accompanied by armed guards. Local people were friendly but lawlessness was rife and groups of manacled prisoners regularly brought down to Chanak after being captured in the hills by units of the British occupying force.

Jo’s father was among the first representatives of the IWGC to begin work in areas of the peninsula where some of the fiercest fighting had taken place just five years earlier. She recalled the terrain as being little more than an uncleared battlefield. As a result, all ofher father’s journeys were made in Ford Model-T cars because of their high ground-clearance and ability to clear rutted tracks. Her father would take a revolver with him on these expeditions because of the threat from both brigands and packs of wild dogs which also roamed the countryside.

Occasionally Jo would be allowed to go out in a car with one of the Turkish drivers(knife in his cummerbund) and at other times she and her mother would head to the nearby village of Maidos on their donkeys. 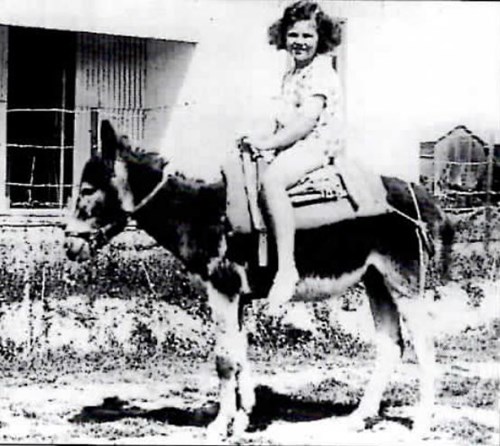 Above: Jo Salmon, aged eight, on a donkey at Gallipoli.

The British presence was enhanced by the presence of the light cruiser HMS Torch which patrolled the Narrows, and whose captain would enliven the social lives of the IWCG families by inviting them aboard for deck tennis and afternoon tea.

For most of the time, however, Jo’s only companion was her mother: the pair would bathe in the sea and Jo was encouraged to read newspapers and magazines from England as there were no formal schooling opportunities. Life was good as the weather was warm, but there was the ever-present danger of living in a former battle zone and of stray ordnance on land and sea–Jo recalled mines being regularly washed up on the beach and, in once incident, a British sailor being killed when he sat on top of one for a photograph and inadvertently exploded it. 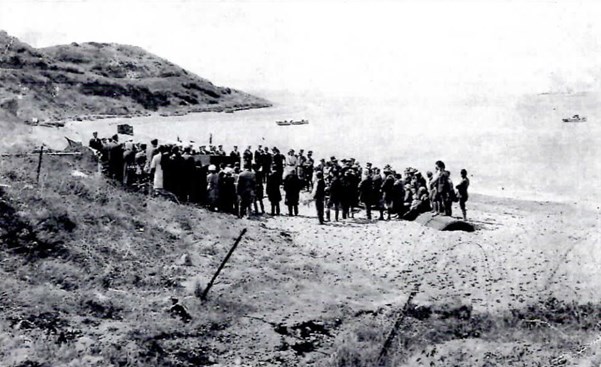 Above and below: Two pictures that are thought to be of the first-ever Anzac Day ceremony on the peninsula. It is unclear whether the pictures – showing Anzac Cove - were taken in 1920 or 1921, but in either case they predate any other formal gatherings at Gallipoli to mark this date. Jo’s father has been marked out with a pen-inscribed cross beneath him on one of the images. 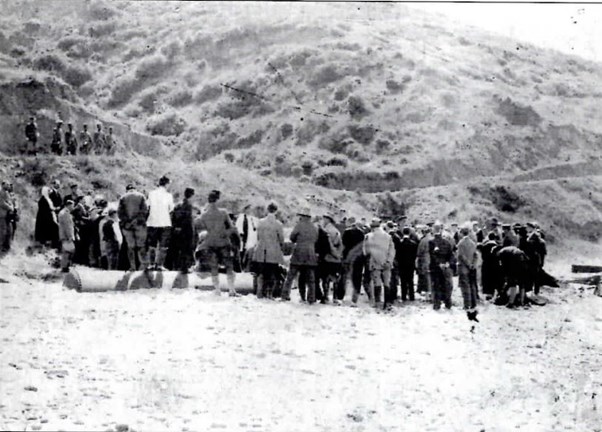 The peninsula was also littered with corpses from the ill-fated Allied campaign of 1915.

Most of the work of the IWGC consisted of directing a force of Greek and Turkish workmen in the collecting and identifying of bodies. Sadly, most had lain in the open for five years and could only be identified by identity tags. Jo remembered well the interest and excitement when the body of a German Uhlan officer, in full dress regalia, was found.

To facilitate the honouring of the fallen, a small quarry was established a little way north of the IWGC base at Kiliah and blocks of marble removed and transported to the various sites being surveyed for use as cemeteries and memorials. The heavy work was done by a mixed workforce of Greeks and Turks who had no love for each other and would frequently get into knife-fights. Their work was hot, tiring and unpleasant – and almost always dangerous courtesy of unstable ordnance that lay scattered everywhere. 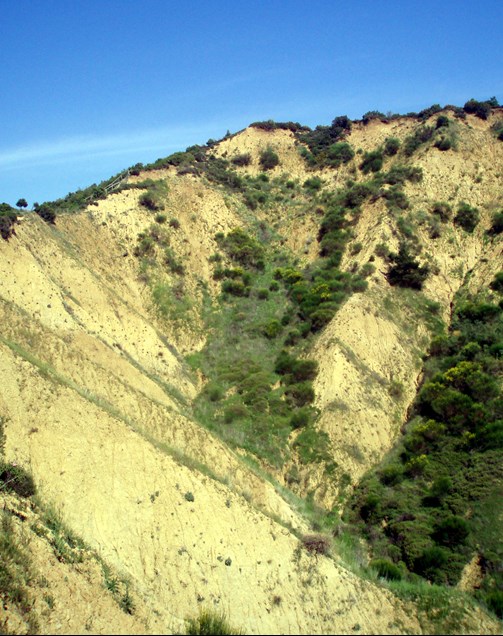 Above: Rhododendron Ridge: The kind of inhospitable terrain that Jo’s father had to negotiate.

When Ataturk led his Turkish forces in a new War of Independence the situation at Gallipoli became even more unstable – not least between the Greeks and Turks- and it was considered unsafe for the IWGC to continue its work. As a result, in 1922 Jo and her family were taken on board HMS Torch for the final time, arriving at the port of Smyrna to witness the burning of the town and its fall to Ataturk's forces before transferring to a larger ship for the main journey home. 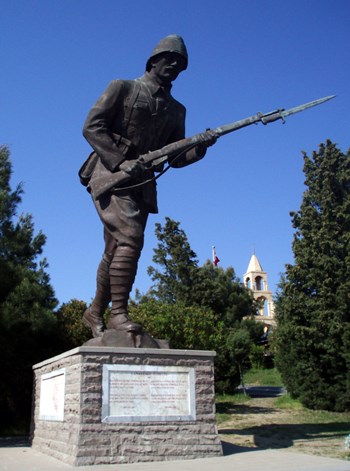 Above: A memorial to Ataturk on the Peninsula.

Joseph Salmon never returned to finish the work he had started at Gallipoli, having initially taken up a post with the commission in Belgium. Unfortunately, his work in Flanders evoked too many painful memories for him of the days he had spent in the Salient during the war. After a period of illness, Joseph would go onto a successful civilian career in which he oversaw a number of structural works, including the creation of a concrete promenade and sea wall at Wallasey in Cheshire. He would die in 1974 at the age of 87.

As for Jo, school and a new life had beckoned after her adventure in the east, although her memories of Gallipoli would remain strong throughout her life.