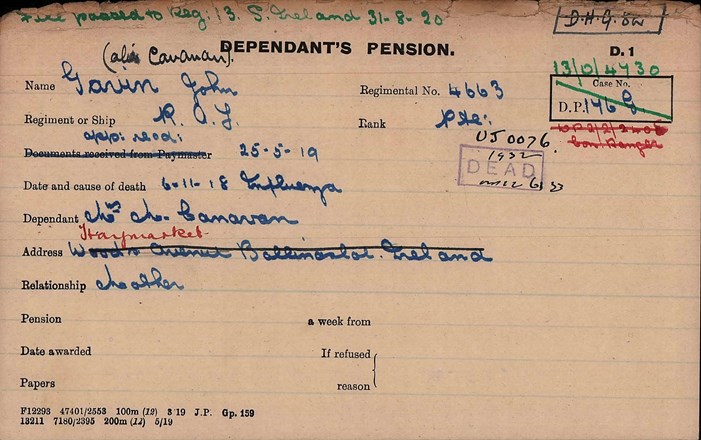 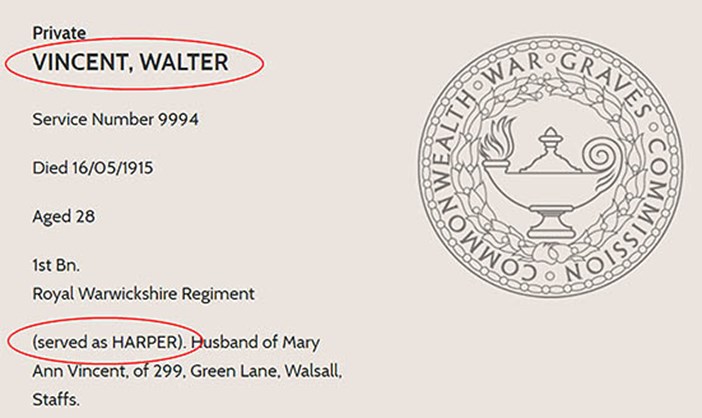 The CWGC supplied to The WFA a list of known aliases in the form of an Excel spreadsheet containing approximately 3,500 rows, each row representing an individual soldier who had served under an alias. It provided details about the soldier - his true family name, his alias name, his service number, regiment, rank, date of death, etc. The spreadsheet was subdivided into 71 'Books', each Book being a spreadsheet containing 50 such rows with additional columns to capture further information about each soldier. 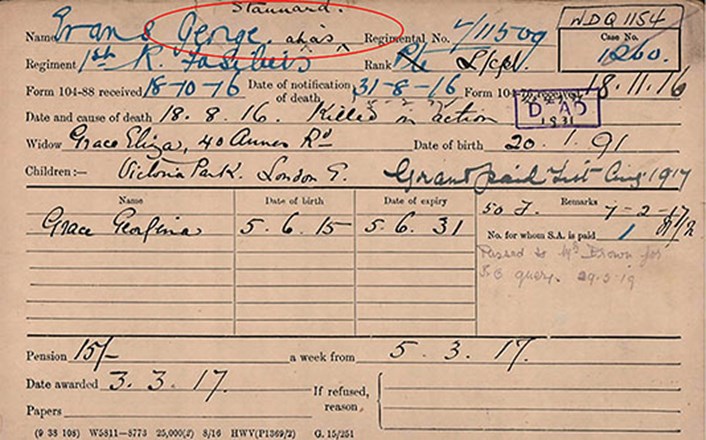 Starting in February 2020, approximately 150 WFA volunteers, split into 8 teams, were engaged in this phase. Each volunteer was assigned a range of card drawers and searched through their drawers looking for cards with any evidence of 'another name'  - one that differed from the name that was already on the card's index in Fold3. Any that were found were reported, using an online form, and automatically collected into a Master Spreadsheet (MS). Here were recorded the web address (URL) of the card in question, the corresponding address of its CWGC entry (if there was one), and the detail from the card that had caused the volunteer to report it.

In the background, work was done de-duplicating entries, identifying erroneous data, etc: in general, cleaning up the data as far as possible. There were nearly 10,000 lines of data, each line representing a card submitted.  In theory, if a soldier served under an alias, he was likely to have 2 cards: one for his true name and one for his alias name, so there were approximately 5,000 soldiers in the MS. A small team of inputters went through the MS, row by row, comparing the suggested correction to what was held on the card, and its index, in Fold3. Many cards had already been corrected in Phase One or correctly indexed by Ancestry when the cards were first digitised, but just over 50% of the submissions resulted in a correction being made to Fold3, either to add or to correct a name. Phase Two was completed on the 15th June.

Whilst the formal project is now complete, a third phase will be on-going. This is to throw it open to the public in various ways. Firstly, the Master Spreadsheet from Phase Two is to be made available on The WFA website as a resource which can be searched for possible alias names. Private individuals have already written in to The WFA suggesting the names of other men who served under alias names ; some were already known to us, others not. These are being captured and investigated and an invitation to submit more is being published on The WFA website. Secondly, anyone finding errors on any of the cards is invited to submit corrections using this form. Finally, Will Butler is in conversation with various academic bodies to see what opportunities might exist for the subject of 'why men enlisted under aliases' as the basis for a Masters or Doctorate study