On the night of 19 January 1915 ... three Zeppelins set off on the first air raid by airships over Britain. Engine failure caused one to turn back but the other two reached England. They had intended to attack the North-East coast but navigation at the time was so uncertain that they both made landfall at a point just north of Great Yarmouth on the Norfolk coast. In the dark, numbed with the long exposure to the cold, by the light of a flare and with the aid only of a map, one of the commanders decided that he was over the Norfolk coast and set off to the south to attack Yarmouth. He dropped a number of light incendiary bombs and some 110 lb explosive bombs. Quite a few of them failed to go off, but the one that fell on the St Peter's district led to the deaths of an elderly spinster and a shoemaker—the first English casualties resulting from an air raid. Their death certificates give the cause of death as being caused by 'explosion due to bomb from hostile aircraft'. The other Zeppelin went north after crossing the coast. Its commander was not so clever, as throughout the whole raid, in which he followed the coast round past Cromer and down the Wash to King's Lynn, he thought he was over Scarborough!

Bombs were dropped on the way, and the lights of King's Lynn pointed the way to a target. The Chief Constable was a little behind in ordering the electrician to extinguish the street lighting and the Zeppelin homed in, dropping bombs on the closely- packed streets of terraced houses. Two people were killed here too, a twenty-six year old war widow and a fourteen year old boy. Their deaths were recorded as resulting from 'the effects of the acts of the King's enemies'. They were all poor people and I have not been able to trace any gravestones or memorials for them, so when we think of those who died in the war, can we just spare a moment for the victims of the first air raid: Percy Goate (14), Alice Maud Gazley (26) from King's Lynn and Samuel Alfred Smith (53) and Martha Mary Taylor (72) from Great Yarmouth.

The sites of the raid on King's Lynn have been long-since cleared and are now temporary car parks awaiting the inevitable intrusion of office blocks; original photographs show the extent of the considerable damage that was caused by the comparatively crude missiles of the time. Great Yarmouth, although very badly damaged during the last war, gives a little scope for 'then and now' treatment, and one of the much-photographed buildings at the time was rebuilt in the original style and now sports a memorial plaque.

Original Gallery of photos featured in the January 1915 raid on Great Yarmouth and King's Lynn: 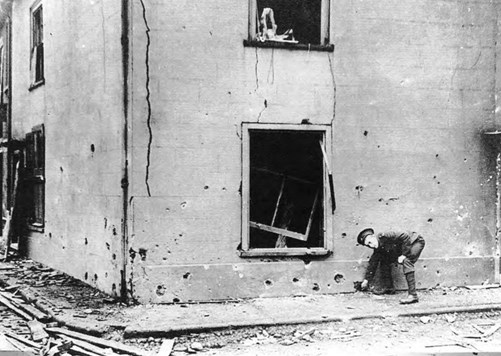 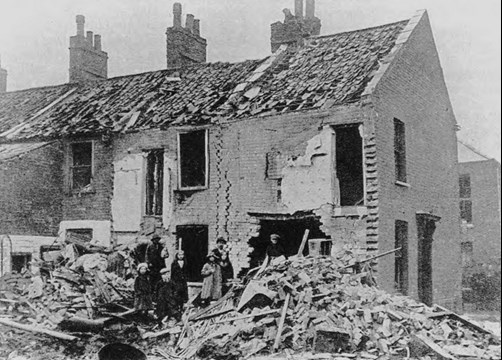 The Damage caused by one of the bombs dropped on King’s Lynn, 1915 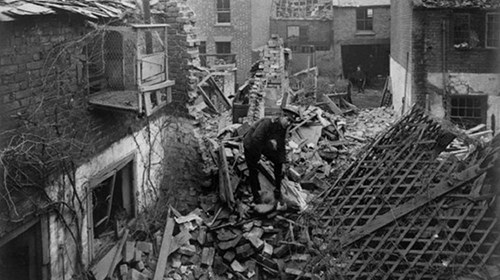 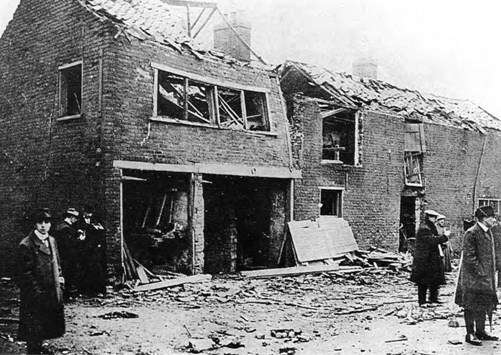 The bombed house in the St Peter’s Plain, Great Yarmouth where Ms Martha Taylor (72) was killed. 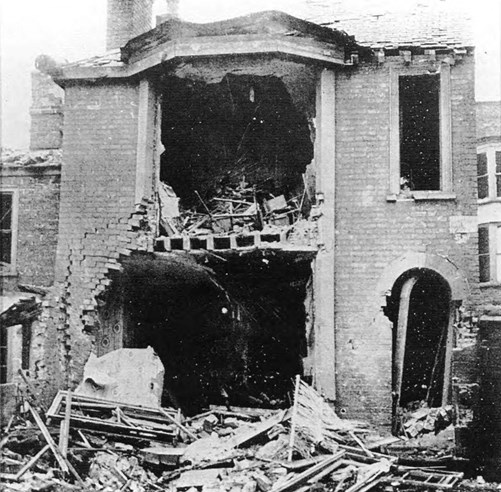 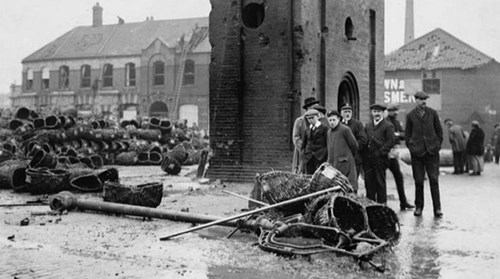 Find out more: Norfolk in the First World War

Bob Wyatt is the author of 'Death in the Skies'. This is a comprehensive study of this January 19165 Zeppelin Raid on Great Yarmouth and King's Lynn.