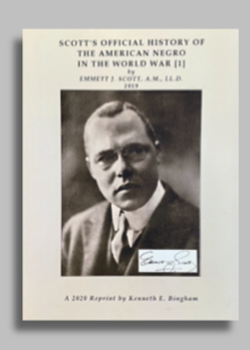 A 2020 Large Format Reprint by Kenneth E.Bingham or read an out of copyright version for free online > https://net.lib.byu.edu/estu/wwi/comment/scott/ScottTC.htm

Mr Emmett J Scott was Special Assistant to Hon, Newton D.Baker, Secretary of War - so he had to be circumspect. 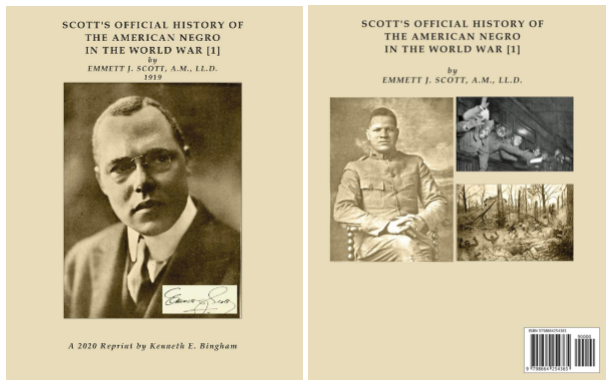 This is a reproduction of the 1919 printed on demand large format. Though not a hardback it is secure in a sturdy artificial binding. An attractive cover and reverse with examples of the kinds of photographs found inside featured here. Indeed the book is packed throughout with photographs (by Cpt. E.L. Snyder) set out on repeated pages in the forms of mini-galleries. As well as the text reproduced as originally formatted there are copies of origin correspondence penned by or received by the and author who is African American Emmett J. Scott who was the Special Adviser to the Hon. Newton D Baker Secretary of War, the US Secretary of War.

What follows is, he hopes, ‘a reliable record of the many services and sacrifices that the Negro race has willingly laid upon the altar of patriotism’. (p.10)

Over 21 months in this role, Scott makes us aware of the wrongs against African Americans, however he sometimes reads like something of an an apologist for outright racism and hideous violence against those of his own ethnic background. We need therefore to note that educated African Americans, especially those living in the north of the country, or in an enclave such as Washington DC, thought of  themselves as an elite with more in common with the moneyed and educated white population - no matter how often they too could be on the receiving end of racial discrimination.

The author, raised in the north, is at times is mealy-mouthed around the realities of ‘Jim Crow’, segregation, mobbing, gross unfairness and violent lynchings coaching it terms like this, that Negroes (sic) ‘suffered rebuffs and mistreatment which … tried their patience and caused them to wish to visit violence upon the community’. (p.81)

In his role as a Special Adviser to the Secretary of War, Scott took complaints and grievances, researched and reported on them dispassionately and managed them firmly, though from his own position and status which he would have put at risk had he more openly played the race card - he is writing in 1919 after all, not 1969 - a good 50 years before race riots against abuse and segregation began to have a lasting impact. 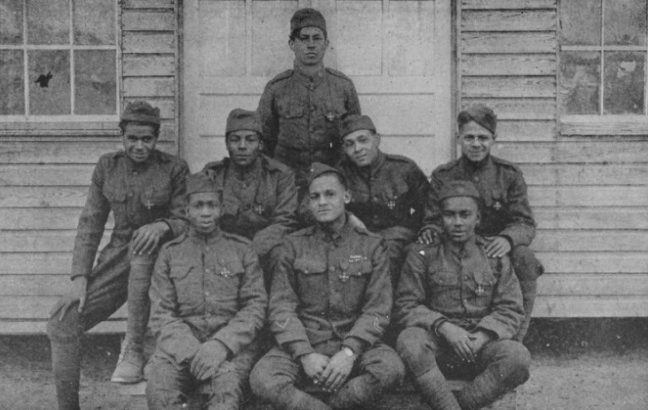 A realist or an apologist ?

For a record of systemic racism during America’s First World War this ‘Official Record’ should be considered a vital text. On page after page it shows how American society was racist to the corps, from the President himself down, and geographically nationwide though far more severe and threatening in the south. Scott may claim that he himself was a kind of emissary for ‘his people’, for example, tackling the issue of where ‘college graduates’ were assigned and labour battalions ‘without regard for their educational or technical qualifications’ and so ‘limited to the use of the space, pickaxe and shovel’ (p.59). He suggests that ‘prompt and vigorous action … on the part of the officers high in command led to a correction of many of the evils complained of, and in this way countless episodes pregnant with the possibility of serious clashes and violent conflicts were happily adjusted and no end of trouble thus averted’.(p.92) This may be the case, but in expressing it like this he shows an ignorance of, or a deliberate desire not to labour at length or in detail the many violent episodes that did occur and that lynchings increased significantly as African American soldiers returned from the war.

That said, at times, the balanced view, that of a lawyer or even judge trying to present the case rather than take sides, the full text of the now infamous written request by General Ballou that African America soldiers ‘show discretion and sensitivity regarding ‘Jim Crow’ behaviours and therefore somehow police themselves by going along with segregation of African American soldiers and draftees in public spaces - especially when mixing with the French.

Scott goes on to point out that African America paper the Cleveland, Ohio, was dismissive of General Ballou’s ‘letter’, to say ‘shoo fly’ to General Ballou and ‘concentrate on getting the Kaiser’ (p.99) This is indicative of a sentiment which was that regardless of the unfairness of their lot, for the better good, and their own chances for change in the longer term, that African Americans should in effect accept their lot for now, however difficult, hurtful, painful and unjust it was. That in order to carry ‘the war to a successful conclusion’ - avoid ‘mention of the thorny question of democracy’ which was available to some, but not to African Americans anywhere in America and notably in the southern states. At time of war was not the time to get political, he suggests - that could come afterwards.

In all fairness to Scott, he points out that all the camps where African Americans were based were visited and that from the reports returned they could be described as either ‘Fair’, ‘Not good’ or ‘Inexcusably bad’. Though once you have read any of the modern historians you will conclude that ‘unfair’, ‘very poor’ and ‘appalling’ would a better way to describe the conditions. Whilst measures were taken in 1917 and 1918 to ameliorate some of the problems this was done, you feel, not to improve the lot of the African American draftee, but to reduce violence in camps and surrounding towns wherever the outright hatred and racism of the time could boil over.

Be warned when reading Scotts Official History of the American Negro in the World War that the language used is of its time and that although written by a person of mixed African American and white European descent himself, will appear offensive to modern readers. Scott refers to ‘the Negro Race’ (sic) and Negro throughout, as well as ‘colored’ (sic), ‘black men’ (sic) and holds nothing back when quoting a senior British civil servant of the time who described a substantial part of the population under rule of the British Empire in Southern Africa as ‘half-breads’ (sic).  The phrases ‘colored soliders’ and ‘Negro draftees’ are common place. Depending on which contemporary author you read the term ‘Negro’ itself is either worn openly as a sort of race-badge with pride as by this author or derided as denoting a person as an ancestor of slaves rather than recognising the lack of homogenaeity amongst those of African descent. 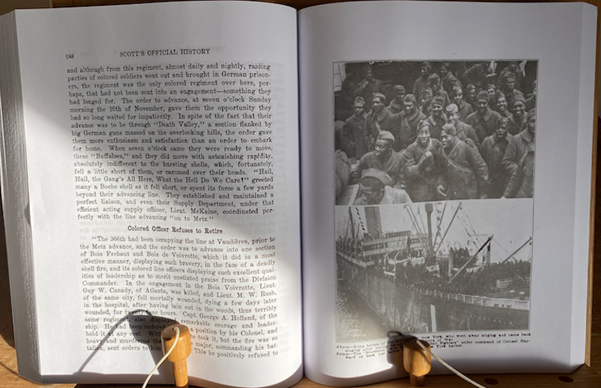 A substantial collection of galleries of photographs, not reproduced well in this 2020 large format reprint of the 1919, but showing nonetheless the significant presence of African-American soldiers and personnel in training - in catering halls and barracks, training, on board ships, in uniform as soldiers or stevedores, and US Army uniform or in the French M15 Infantry Adrian helmet with French kit as part of the French Army. 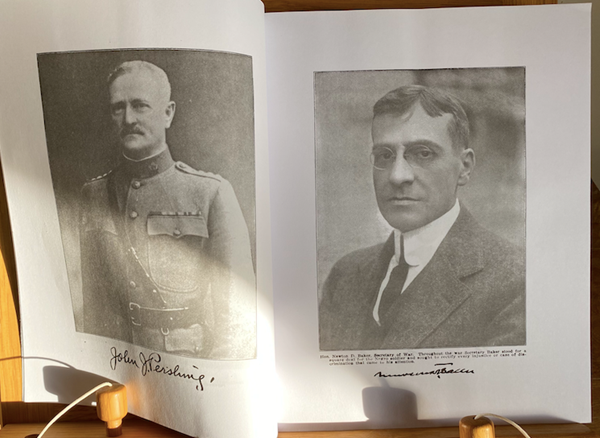 Combat Units and the Statistics

The author is thorough in the detail he provides regarding the experience of the African American during the First World War.

African Americans served in ‘all branches of the military’, he claims. Though only under white officers in the US army itself once deployed ti France, and only under their own officers, of the rank of Captain and below, once moved into the French Army

African American soldiers then took part in the battles of the Argonne Forest, at Chateau Thierry, Belleau Wood, at St.Mihiel, in Champagne, in the Vosges, and at Metz. 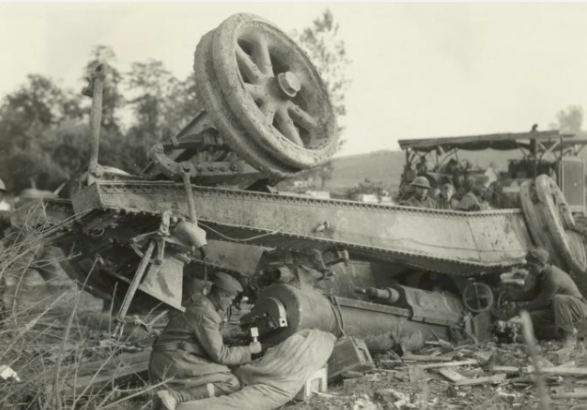 According to Emmett J. Scott there were ‘Lessons of self-control, cleanliness, promptness, obedience, efficiency, and the value of time’. While the ‘wants’ of African Americans were clear: courts over lynching, Jury Service, the right to vote, the right to hold office, universal suffrage, better education and the end of ‘Jim Crow’ - a big ask in 1919. Otherwise he concluded, ‘What has the American Negro got out of the war? Time alone can bring the full answer to this sweeping question. (p.459)

Scotts Official History is essential reading for anyone with an interest in the overlooked and historically exploited African Americans who served in the First World War as stevedores and combat soldiers.