German air raids on Britain during the First World War began in early 1915 when Zeppelins were used to bomb coastal targets in Eastern England. The use of Gotha bombers began in May 1917 - these aircraft were capable of long distance flights and were used to make daylight raids on South East England.

On 13 June 1917, German Gotha aircraft carried out an air raid on London – the first attack on London by a squadron of aircraft.  Fourteen reached London, whilst three bombed Margate and Shoeburyness. 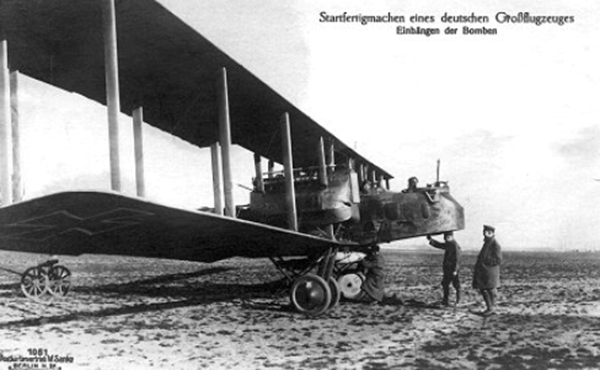 At about 11.25am, bombs began to drop in the east end of London and in the City of London, bringing the highest casualties for any air raid on Britain in the war.Seventy two bombs were dropped within a one mile radius of Liverpool Street Station and in the east end, resulting in 162 civilian deaths and injuring 432 people.

In the days that followed the air raid, inquests were reported on in graphic terms in newspapers. The bombs dropped were high explosive, filled with shrapnel, with many deaths resulting from terrible shrapnel wounds.

The City Coroner considered the circumstances of forty seven deaths where

‘…some of the bodies had been mutilated beyond recognition, and in many cases it was only by marks on handkerchiefs or other articles of clothing that relatives were able to identify the remains..’ (Westminster Gazette 15 June 1917)

It appears that many Londoners came out into the streets to look at the aircraft. A report on the death of PC Alfred Smith indicated that when they heard the aircraft, a group of workers in a factory in Central Street rushed out into the street. He forced them back inside but moments later, a bomb exploded in the street, killing PC Smith. 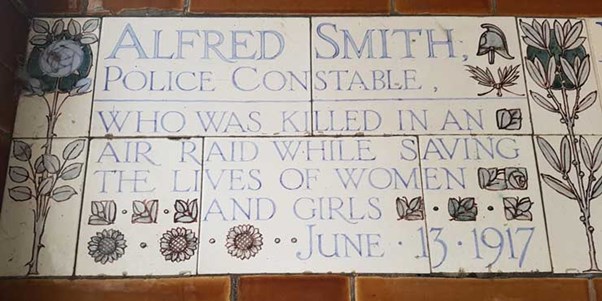 Above: A memorial plaque to PC Alfred Smith

Another report focused on the sad fate of a family in Bethnal Green. Joseph and Rebecca Moss had been born in Russia but came to London sometime between 1905 and 1911. Rebecca and two of her children died when a bomb hit their home – two infants died a few days later of their injuries. Her husband and sons were spared as they were out when the bomb fell.  The family are buried in the Plashet Jewish Cemetery in East Ham. 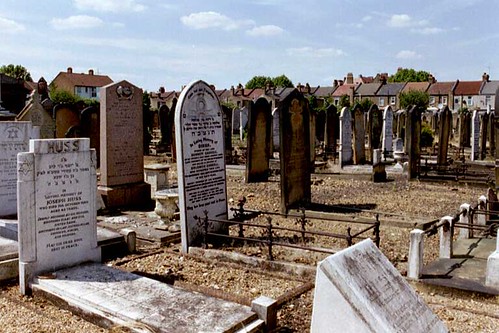 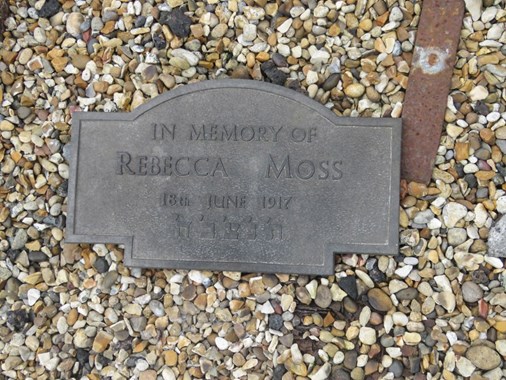 Above: Plashet Jewish Cemetery and the plaque marking the grave of Rebecca Moss

At least one Coroner commented on the circumstances, as was the case in Shoreditch where the Coroner stated that:

‘…..innocent people had been made to suffer through malicious attacks which could not in any way affect the outcome of the war. It pleases the All Highest in Germany to make England suffer in this way. It really is murder but it is no use bringing in such a verdict…’.   (Westminster Gazette 15 June 1917)

In Poplar, the Upper North Street School suffered a direct hit, with the loss of 18 children and a further 37 injured. 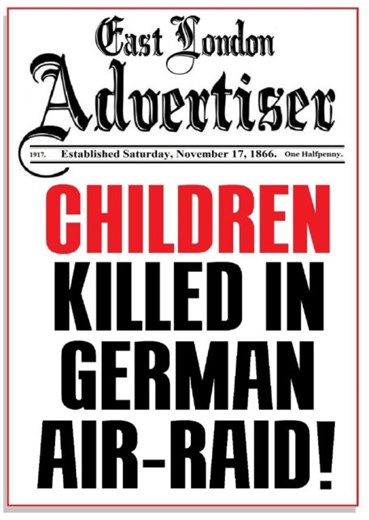 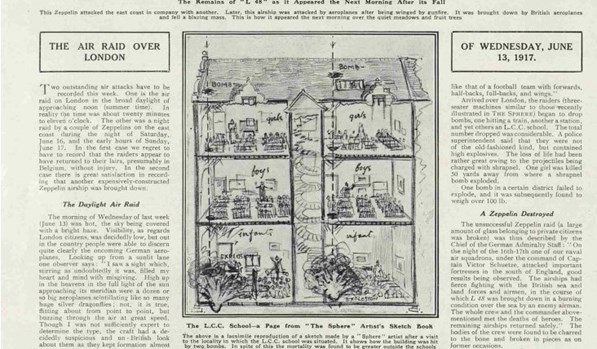 Most of the children who died were aged 5 or 6 years. The funerals took place on 20 June 1917 with 15 of the victims buried in a mass grave in East London Cemetery. Many attended the burial service, with more than 600 wreaths sent and a personal message from the King and Queen read out. 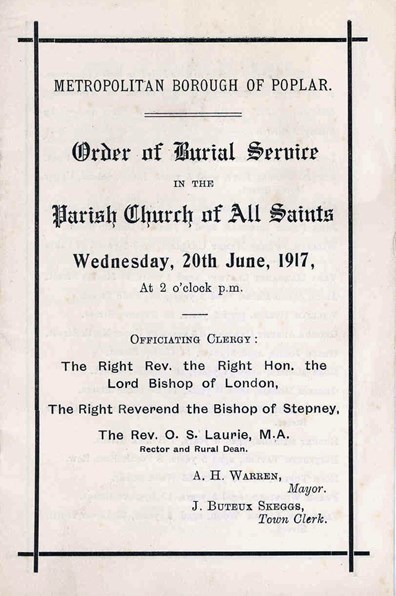 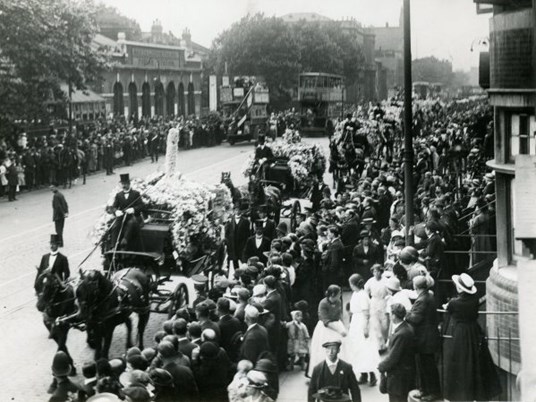 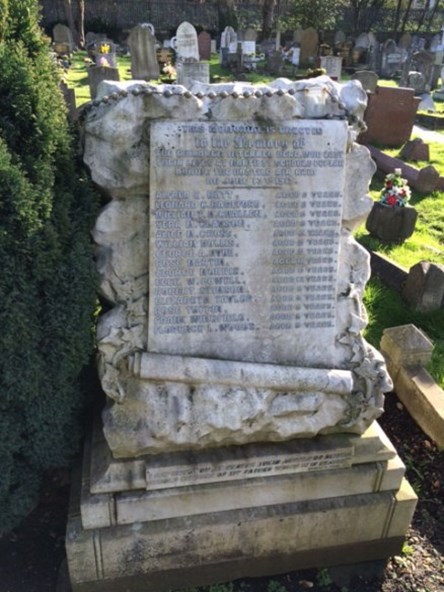 Above: The Order of Service, the funeral and the mass grave 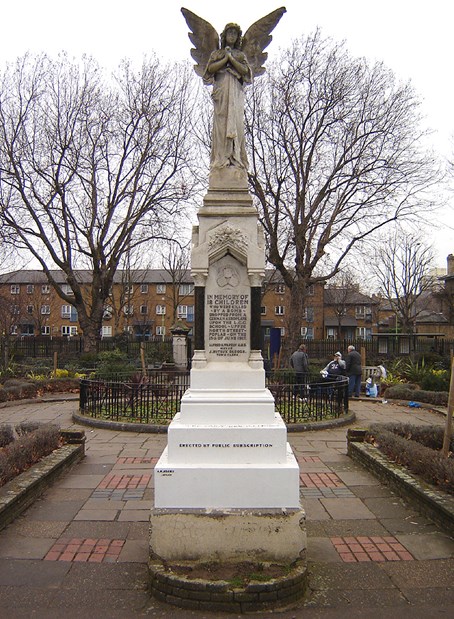 Above: The Memorial to the children killed in the air raid

Between June 1917 and May 1918, Gotha bombers made a further seventeen attacks on London and other south eastern towns. The last aeroplane attack of the war occurred on the night of 19/20 May, with one further Zeppelin attack on the night of 5/6 August 1918.