In the early 2000’s a project was launched – funded by a large donation from The Western Front Association. The WFA project aimed to digitise Imperial War Museums' entire Great War map collection which comprised of a vast quantity of original trench maps and other related content. This would improve access as this had been difficult in the past; due to the large size of many of the maps. This also enabled us to bring these maps to a wider audience. 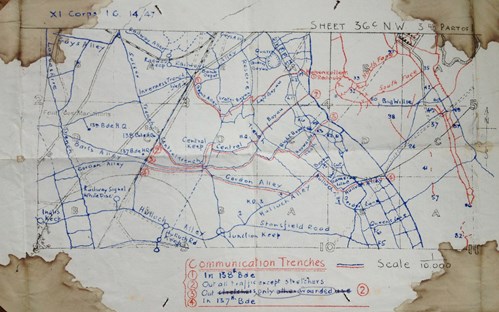 Above: A trench map carried in action at Hohenzollern Redoubt issued to a soldier during the First World War (wikipedia)

It was not known at the outset how many maps were involved, but this turned out to be in the order of 7,000 or so.

The WFA strongly supported the museum's aim of improved access and also understood the importance of preserving the collection. The maps are becoming more fragile so having access to digitised copies would reduce the number of times an original map is handled. Although there are problems with the long-term preservation of digital archives, having copies in addition to the original maps was seen as a way of improving the longevity of the archive. 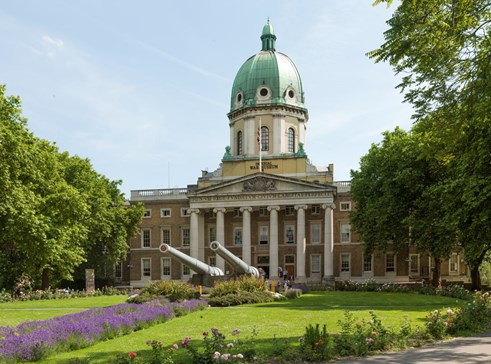 Funds were approved by the committee at the time for a large scanner and associated PC & software and the work was started, coordinated by Martin Hornby, in liaison with museum staff. It was planned to make the resulting scanned maps available in the Reading Room and for sale on DVD from the WFA via the Mapping the Front series of discs. 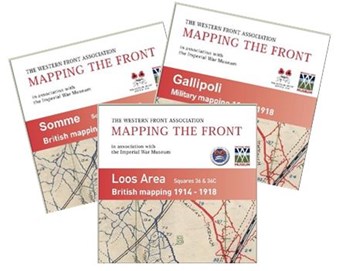 These discs have remained on sale for a number of years, but only about 10% of the saved maps could be made available on these discs. Nevertheless the discs have sold well (but in ever-reducing numbers) and one set of discs in recent years ‘sold out’. The costs associated with creating more discs were prohibitive.

In conjunction with Howard Anderson, who had worked on the original project in the early 2000’s Bill Frost, who lives in Australia, developed the concept of the maps being geo-referenced and made to fit onto Google satellite imagery of France and Belgium. Approaching the WFA’s Development Trustee, David Tattersfield, it was agreed a new project would be undertaken. This has taken several years of hard work by Howard and Bill to bring to a near-conclusion. However, the difficulty remained of geo-referencing such a large quantity of maps.

A pilot project was created using three volunteers, Simon Phillips, the WFA’s Assistant Development Officer and two members, Greg Miller and Mike Day. Over a period encompassing the ‘lockdown’ of 2020/21 they worked on a large number of maps with the idea of expanding the project to encompass a large number of volunteers. The work was complex and slow, but nevertheless progress was made and ideas developed.

During 2021 as lockdown pressures eased it was not possible for these early volunteers to continue the ‘war of attrition’ on the georeferencing but the groundwork had been laid.

Two new volunteers came on board, with Steve Cornock and Rocky Salmon volunteering to help progress the project. Identifying that the process could be stripped down and simplified, it has become apparent that – given volunteers coming forward – the map geo-referencing can be done very rapidly for a large proportion of the maps, and even ‘somewhat quickly’ for more complicated maps.

We are now, simultaneously with the launch of ‘TrenchMapper’ calling for volunteers to come forward to help with the geo-referencing of approximately 6,000 remaining maps.

If you wish to help take the number of maps towards the target of 7,000 please do contact us on mapping@westernfrontassociation.com.