How to find a point on a trench map

If you have found a trench map reference like B.30.a 3.5 or X.2.a.34.12 in family or military histories, war diaries etc, this document will help find where that is.

Introduction. The trench maps used in the Great War resulted from the exigencies of war, they were not best suited to their purpose. The map projection used, the scale and accuracy of the surveying and quality of the drawing would leave a lot to be desired if designed from scratch during peacetime but they were not, they were made in the heat of battle. Seen in this light, they should be considered a monumental achievement.

The importance of producing good maps in a very short time led to the decision to produce British maps that used the Imperial System (i.e. yards), super-imposed on the Belgian maps that used the Metric System (i.e. metres). This Belgian grid system was then extended across France. The resulting grids give rise to some confusion in modern minds more familiar with British Ordnance Survey maps but in fact the system is quite simple.

A map reference like B.30.a 3.5 is short of one extra piece of information, its sheet number. Most Great War references were written without the sheet reference, so one has to infer which sheet to use because that reference will exist on all British 1:40,000 sheets. The first task is to use other information to find which sheet it is on. On its own, B.30a 3.5 cannot tell you where it is on the whole front, Map 1 or Map 2 below can help in that respect or you can use the WFA Google Earth grid to find the map sheet number. The history or source of the reference will usually give a clue to the location, “Near Oppy Wood”, “West of Gavrelle” etc.

Reference format. Sometimes the use of dots and upper/lower case letters can vary from the official system but that is usually easy to understand.

The reference consists of these elements but these are set out in more detail below In summary, 51b.B.30.a.3.5=

Sheet numbering. The most active sheet numbers for the British Army are shown on Map 1 and the full grid is shown as Map 2 below. Each numbered sheet’s mapped area is 32,000 metres wide by 20,000 metres but the British grid is 35,000 yards by 22,000 yards. This yard based grid did not quite fit, the misfit is more noticeable at the Western and Eastern edges. These sheets are drawn at a scale of 1:40,000 and are numbered according to the Belgian system, sheets 1-72 cover the whole territory of Belgium. This system was extended Westwards into France, the new sheets having letters added, the order being East to West, as shown on Map 1. (Later in the war, sheet 36C was renumbered to 44A and sheet 36B to 44B.) 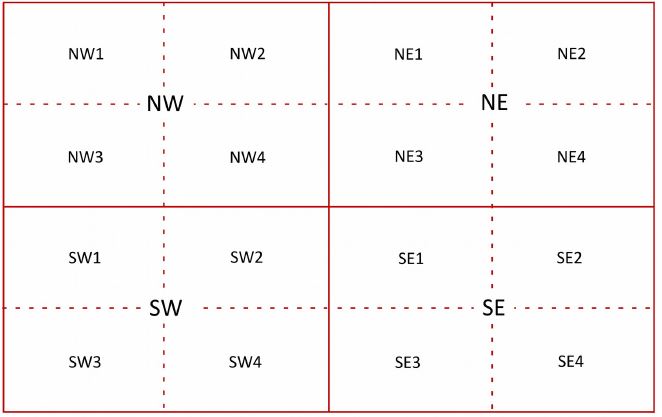 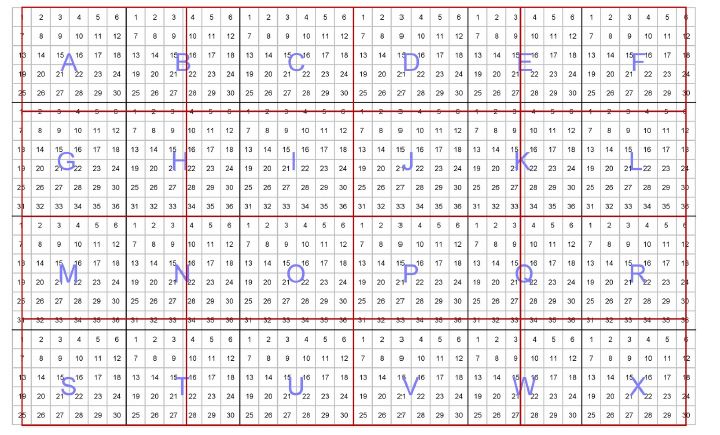 Figure 2. Main 1:40,000 sheet grid system, on some earlier maps called the "Revised System of Squaring". (See Appendix 1 for the older system). The red yard based grid does not fit the underlying metre based mapped area. The mismatch is larger at the Western and Eastern edges, less noticable North and South but still present.

Figure 3. Each lettered square is divided into either 30 or 36 smaller squares

To define a point. On a 1:10,000 trench map, the lettering of the squares were shown as large letters often in the corners of each square, the numbers being presented in the centre as the sample below. Each numbered square is 1000 yards wide and was further subdivided into four 500 yard squares, lettered a, b, c and d row by row. 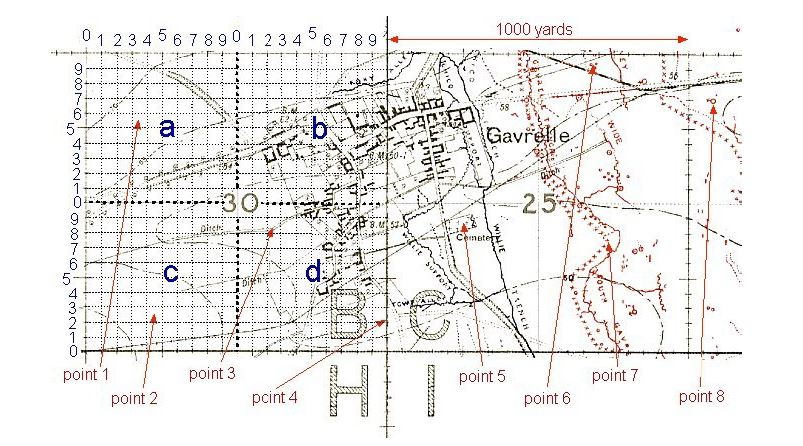 30, the numbered square within B,

a to indicate which of the four 500 yard squares

3 to indicate the square east-west. This is called the Easting

5 to indicate then the square north-south. This is called the Northing

This point, B.30.a.3.5, covers an area 50 yards x 50 yards. In a strict reading of the grid system, if a soldier was recorded as being buried at that reference then the actual location could be anywhere within that 2500 square yards. In practice many used the grid reference as a point.

Sometimes references are given to the resolution of 5 yards by using 2 figures such as 34.55 instead of 3.5, where each 50 yard square can be thought of as being further divided into ten rows and ten columns. A point written as 34.55 would indicate 3 squares from the left plus 4/10th of the way into that square and 5 squares to the north plus 5/10ths of the way into that.

A reference gives the lower left hand point of a square, the actual position on the ground is somewhere in the square. It defines an area, not a point but many reports use a map reference as a point, e.g. for an artillery battery.

Figures 4 & 5 show a dotted grid to demonstrate the idea of the squares, real trench maps do not have these dotted lines. Perhaps the easiest way to get a precise measurement is to make a scale such as the one shown below positioned over square 30. It is made from card with the scale carefully marked off from the side of a grid square. In the example here, the card (often called a Romer) is positioned to measure point 3, the tip of the arrow is placed in the corner of the cut-out card. The distance from the left (the Easting) is taken from where the vertical line crosses the scale, similarly, the distance up (the Northing) is taken from the horizontal scale. 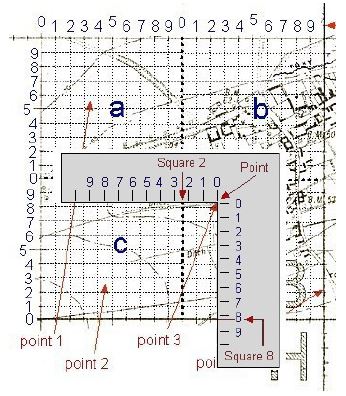 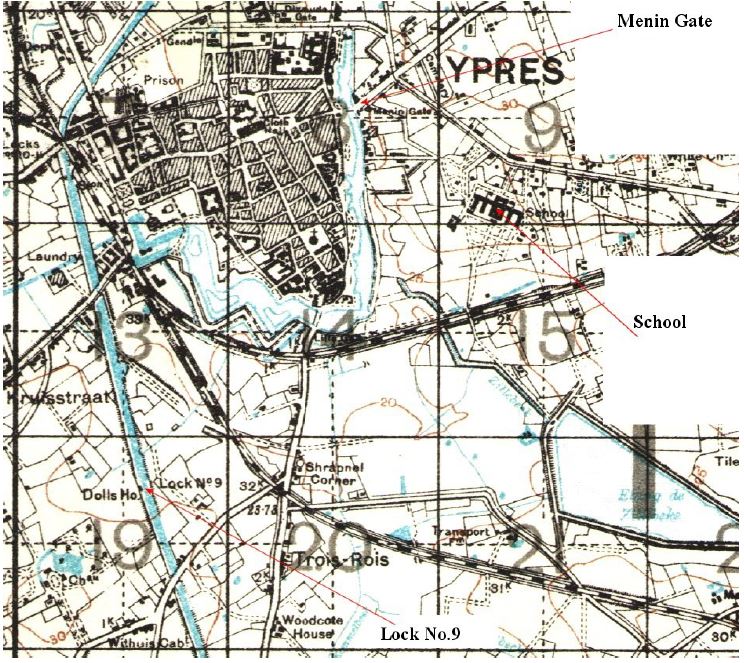 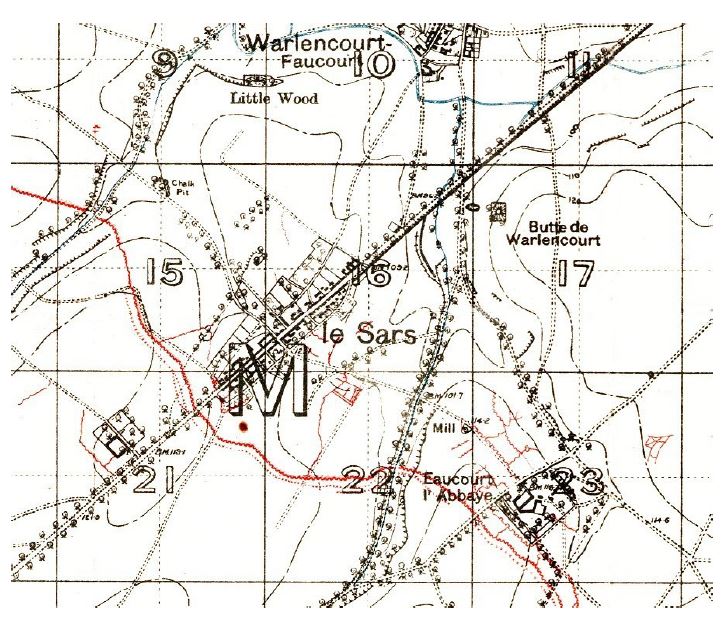 The centre of Le Sars is at 57C.M.16.c, there is no use here quoting the distance within square M16c. 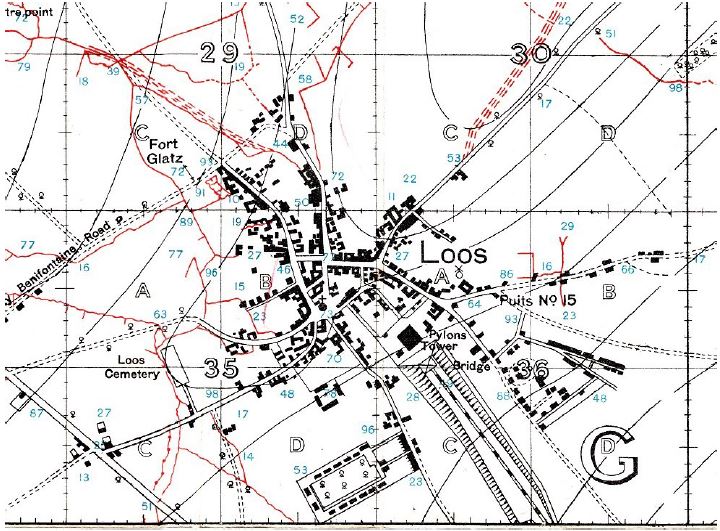 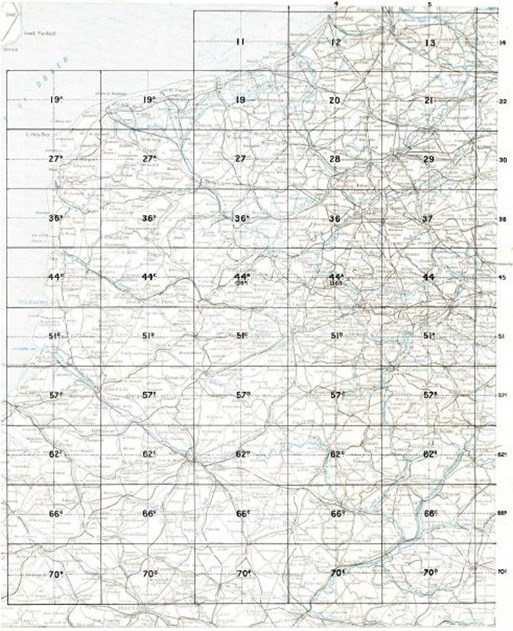 Map 1, Part Of The Grid System As Used In The Great War 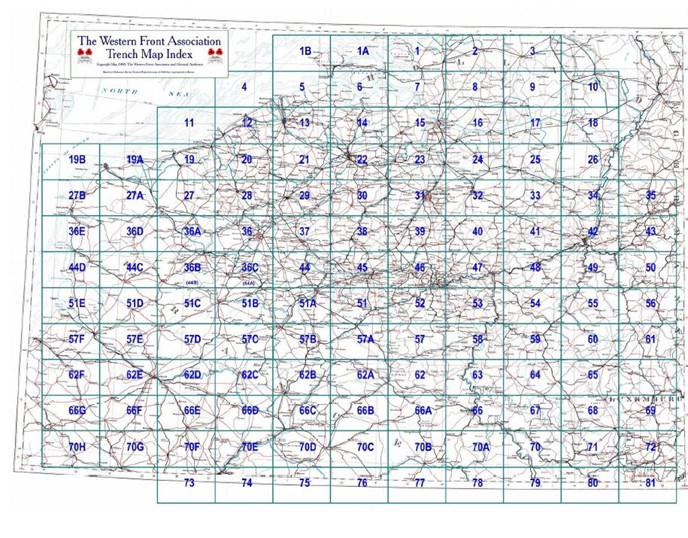 Map 2, the full Great War grid numbering, based on Belgian sheet numbers and extended across France and Holland. The existence of a numbered square does not imply that a map was actually drawn for that square, the system was planned before the extent of the trench lines was established. 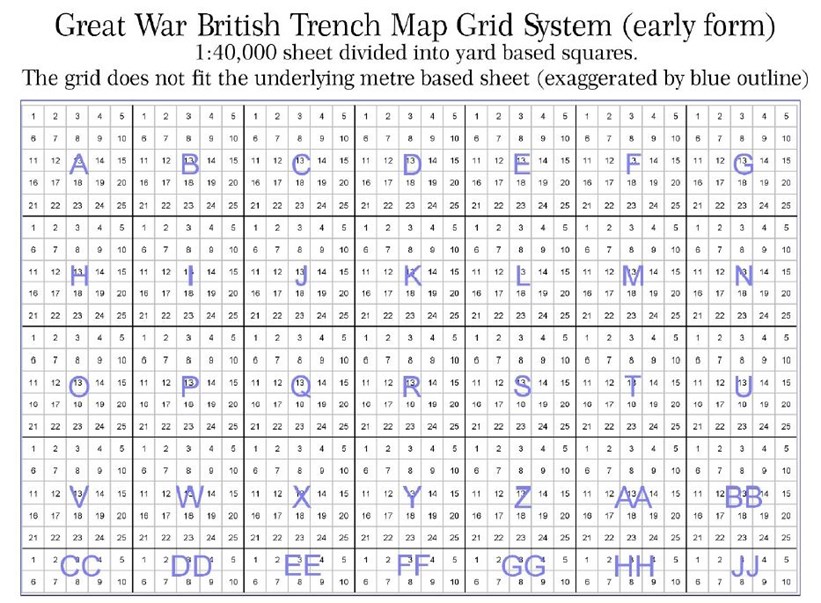 The large squares are divided into 25 smaller squares, numbered 1 to 25, the sides of which are 1,000 in length.

The minor squares and rectangles are to be considered as lettered "a", "b", "c", "d," but the letters are only printed in one small square to avoid confusing the map.

If the position of a point can be identified more closely, the further description N, S, E, or W may be added.

The description A.2.c.d. can be used if uncertainty exists as to whether "c" or "d" is the correct minor square.

Most maps of the Great War did not use this early system. When it was superseded, for a while maps were marked "Revised System of Squaring".