Examples of some of the Gallipoli maps which are now available

As 'TrenchMapper' expands, we have made a small start on the maps of the Gallipoli campaign. The following are examples of some of those that have been geo-referenced so far - but with more to come. 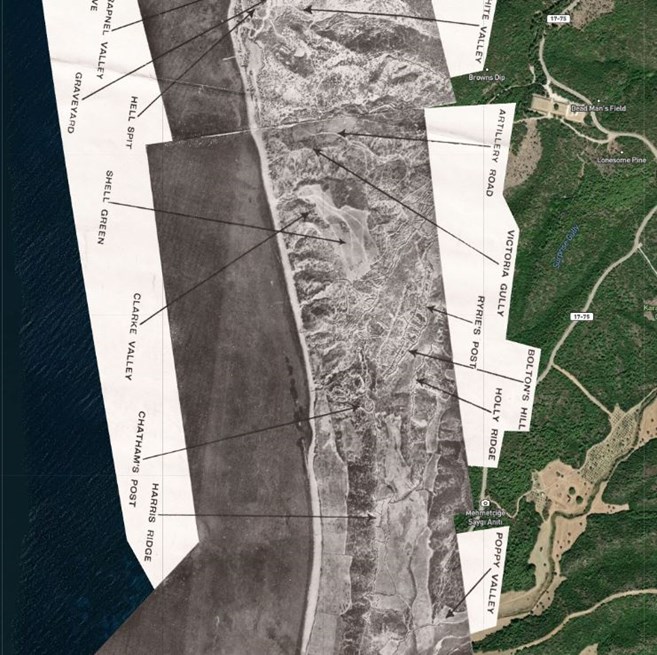 Above: A montage of aerial photos of ANZAC Cove and Gaba Tepe (in 1916) 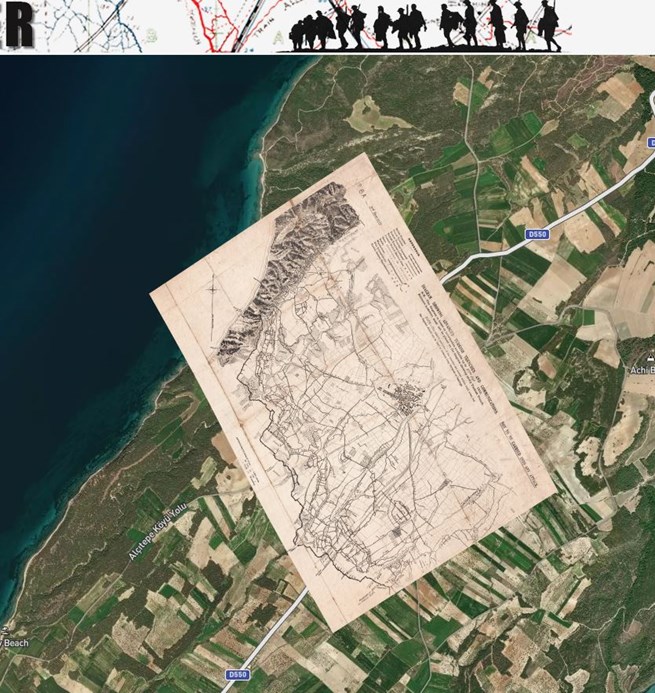 Above: This map is headed 'Diagram showing advanced Turkish Trenches and Communications'. It is dated 27 September 1915 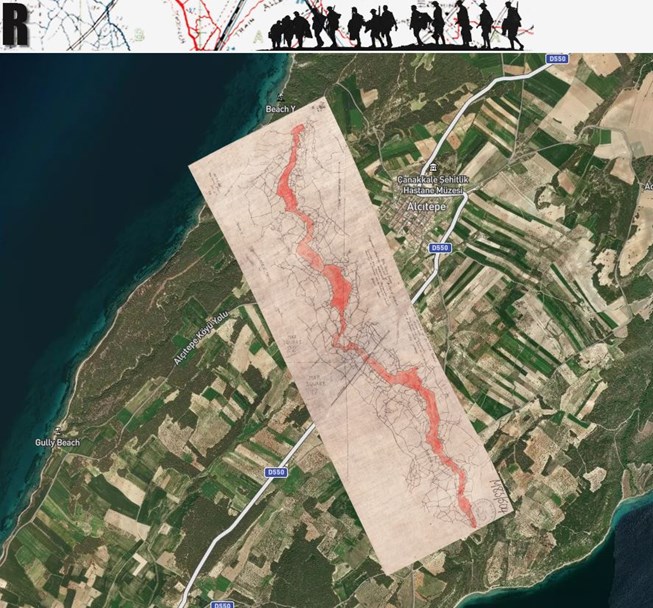 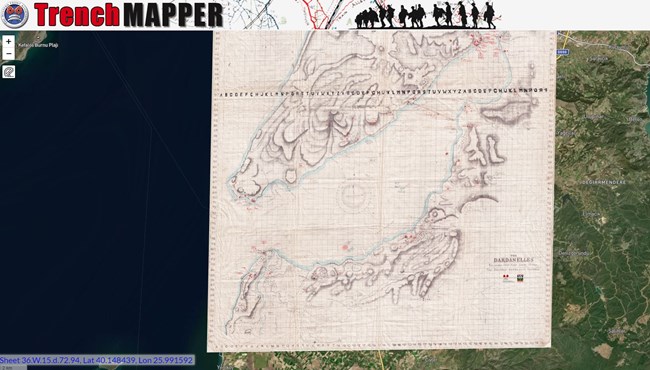 Above: An early map which shows the entire peninsula with annotations showing where the Turkish defences (and mine fields in the narrows) were thought to be located. 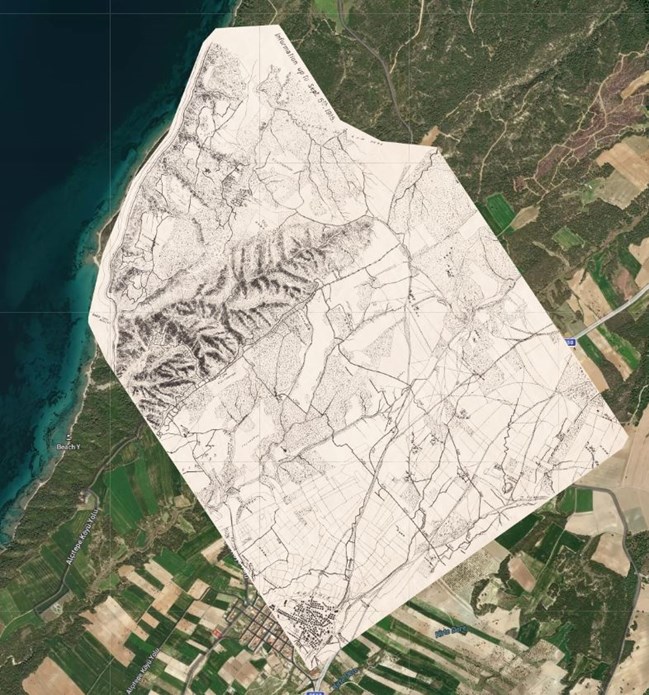 Above: Trench Diagram 9A. This covers the area north of Krithia (which can be seen in the bottom corner) 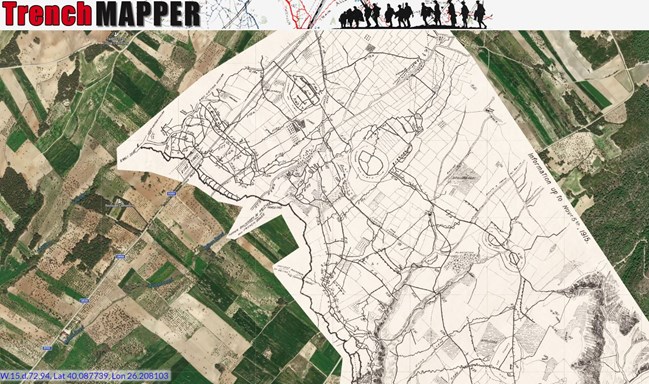 Above: This map from south of Krithia shows trenches all the way to the coast. The Vineyard is shown on the left hand edge of this map. 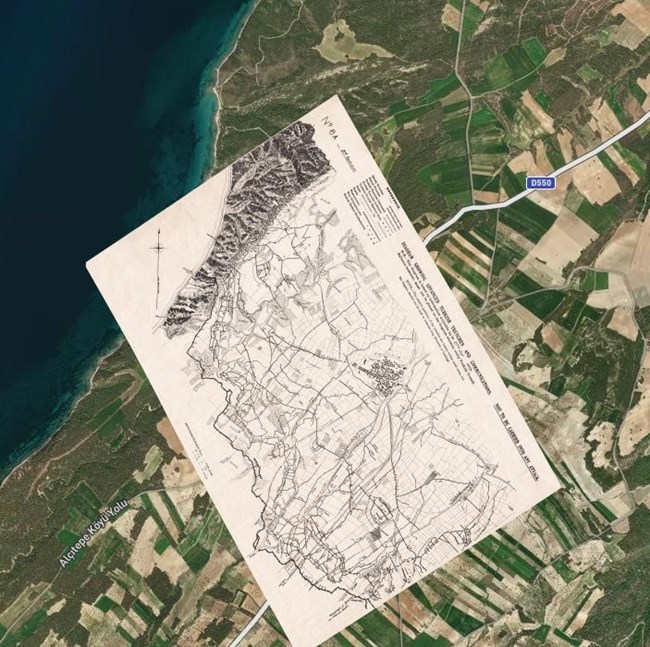 Above: Another map of the sector from Krithia to the northern shore. This is dated 27 September 1915 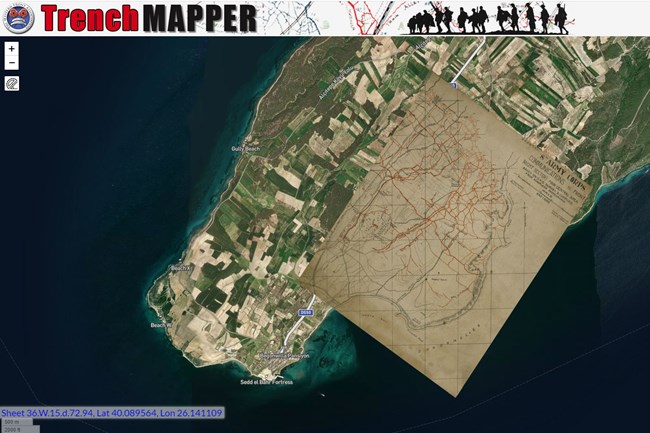 Above: A wonderfully detailed map this is entitled '8th Army Corps Communications to Front (Right Sector) from Central Area based on GHQ survey and compiled from aeroplane photographs' 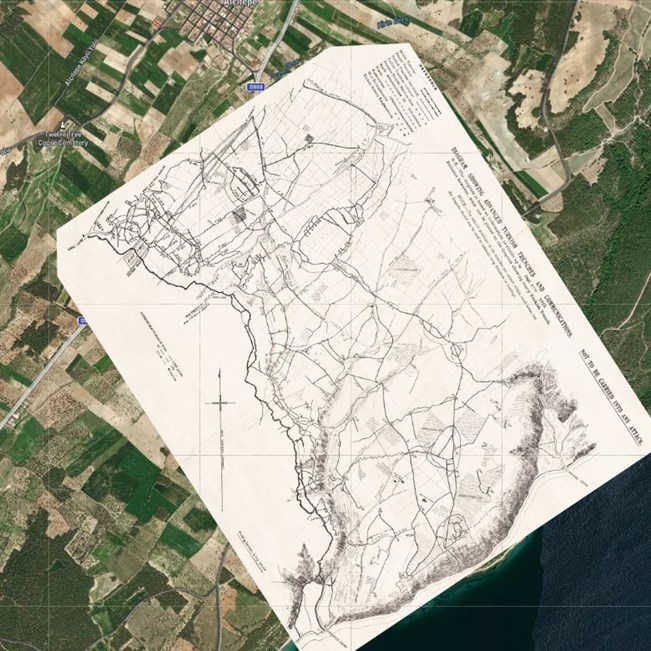 Above: This map shows Turkish trenches and communications. 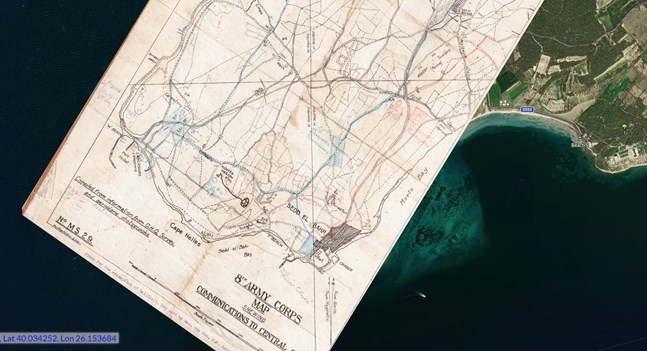 Above: A 'rear area' map (from January 1916) showing communications from the tip of the peninsula to the 'central area'. This map was used by Gen. the Hon. A.M. Asquith, D.S.O. 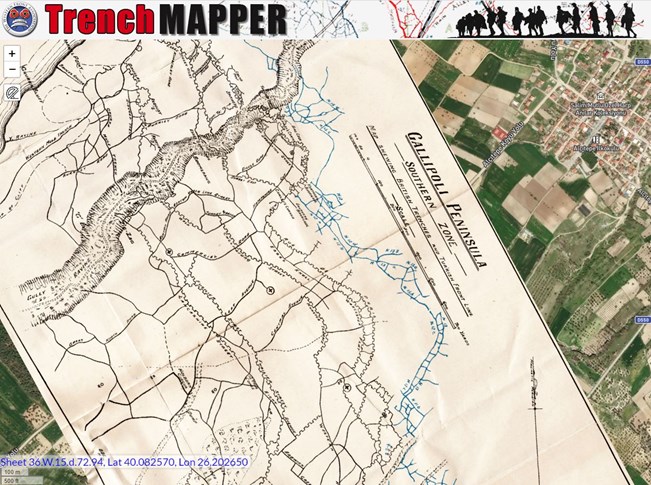 Above: Although entitled 'southern zone' this shows the trenches in front of Krithia 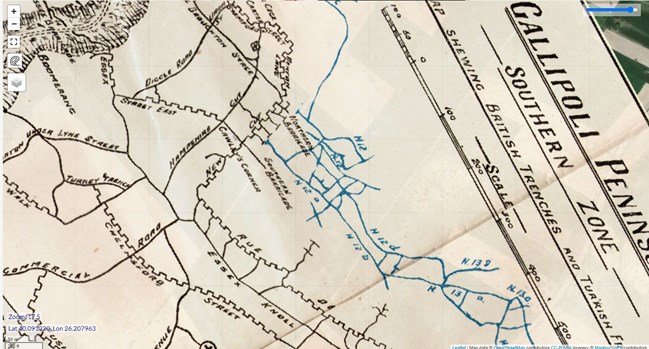 Above: This is a 'close up' of the 'southern zone' map 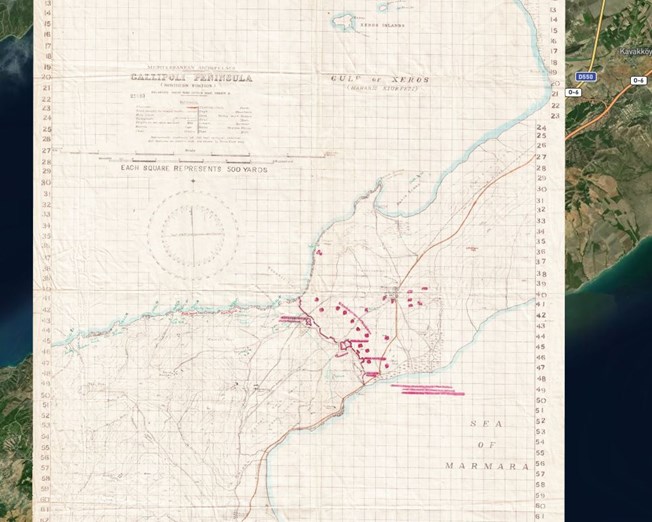 Above: A large scale map showing the area at the 'neck' of the pensinula

Above: Using TrenchMapper also enables you to see the landscape as it is today, here we are above Redoubt Cemetery, with the 'pop up' giving the option to go into street view at this spot.

Above: And here we are above the Doughty-Wylie grave - the turning to this track being in the 'street view' pop up box. 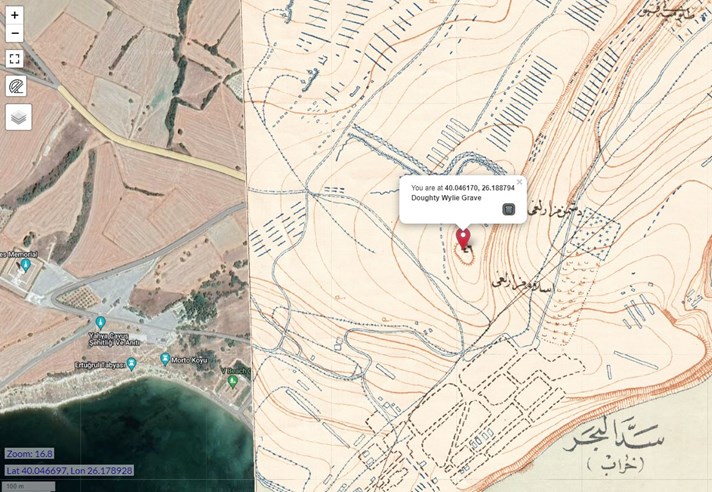 Above: The 'edge' of the (Turkish) map with Doughty-Wylie's grave marked with a 'dropped pin'. 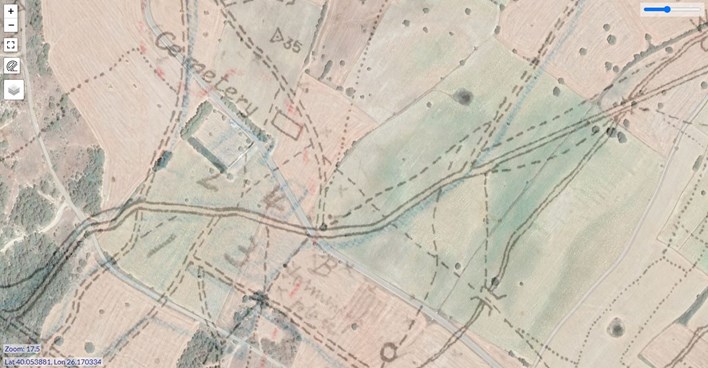 Above: Lancashire Landing Cemetery is shown in this screenshot. The map and the terrain are blended to show the accuracy (or otherwise) of the maps the British used in this campaign.

Above: Lancashire Landing (W Beach) again with a blended image of the map and terrain 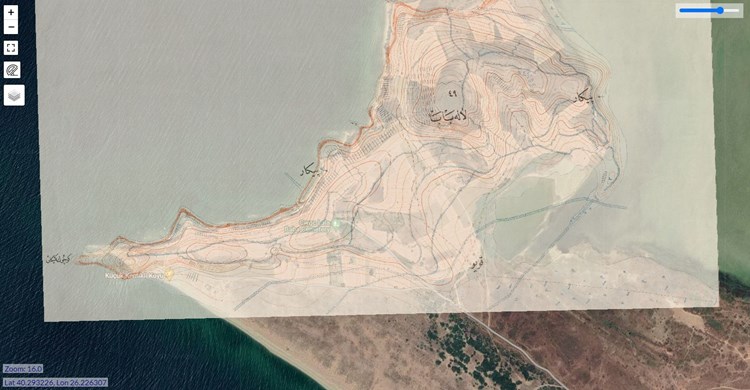 Above: Lala Baba in the Suvla sector showing a Turkish map superimposed on the google satellite view. Again the opacity is at about 50% in this screenshot.

If you wish to see more of these maps, just visit TrenchMapper and click the 'Gallipoli' option in the drop down menu.