Killed in action 27 November 1917.
No known grave. Remembered on the Cambrai Memorial
Memorial: Stone cross with concrete fence in a field to the E of Bourlon Wood, W of Fontaine-N-D, Cambrai.
Location on Google Map

Charles Fletcher Hartley, the eldest son of Mr and Mrs Harry Hartley of Englefield Green, Surrey, was born in Brookline, Massachusetts, USA on 18 October 1897. Educated first at Pomfret School, USA, he went on to Harrow where he won the Heavy Weight Boxing Competition in 1916 - he was over 6' tall - matriculated at Trinity College, Cambridge, and according to his Army Record, spoke French. 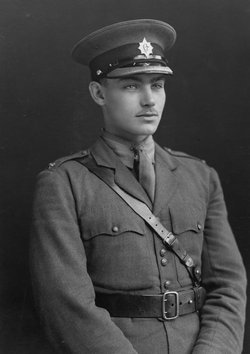 Hartley took his commission in the Coldstream Guards on the 26 May 1916 and went to the Front on 7 November having passed through the six week course at the Machine Gun School at Grantham. He was to serve with the Machine Gun Corps for the rest of his career, earning a mention in despatches for his action on 31 July 1917.

Following the initial British success of 20/21 November in the Battle of Cambrai, there were strong German counter attacks and fierce fighting in and around Bourlon Wood and Fontaine and the ground changed hands several times. "The work of the machine gunners throughout the course of the engagement on the 27th of November was extremely arduous from the beginning to the end of the day." said "The Guards Division in the Great War 1915-18" (C Headlam, Murray 1924) and they took heavy casualties. Exactly what happened to 2nd Lt Hartley' is unclear but it is believed that his two gun teams were in support of the Coldstreams in action near the eastern corner of Bourlon Wood when he was shot through the head.

His grave could not be found after the War and it is presumed that his parents erected the memorial on the spot where he fell. It is in the form of a granite cross with the base inscribed:

The memorial is protected from grazing animals by a concrete fence.

Although the farmer had done his best to protect it from further deterioration, by the early 1990s the memorial was in a sorry state and the lead letters of the inscription were mostly missing. Hartley's younger brother died in 1949 and while someone had visited regularly until recent times no surviving family could be traced. No maintenance arrangements had been made but the landowner does have a legal duty of care.

Although difficult to reach, this is a unique memorial and the WFA thought it should be preserved. Thanks to the generosity of Members and a grant from the Souvenir Francais, funds were raised for a major rebuild. The owner of the land and tenant farmer co-operated fully and a sign-posted right of access from the lane to the north of the memorial was agreed early in 1998. Visitors are asked to use only this way to reach the site.

Meanwhile, Harrow School had been approached by the WFA and in December 1997 the Governors agreed to the School becoming custodians of the memorial once restoration was complete. The Rivelin Masonry Company of Sheffield were commissioned to carry out the work and the memorial itself was rebuilt and re-lettered by the autumn of 1998. The concrete fencing which had deteriorated so badly has been replaced by a visually similar but more robust design to withstand the cattle, using stainless steel re-reinforcing sponsored by Ancon-CIark Ltd.

Thus the memorial to Lt Charles Hartley in this lonely spot is well set for the future. 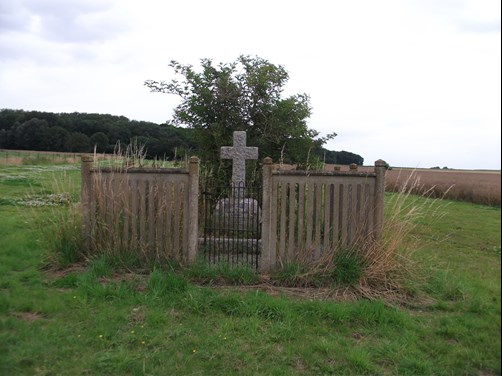 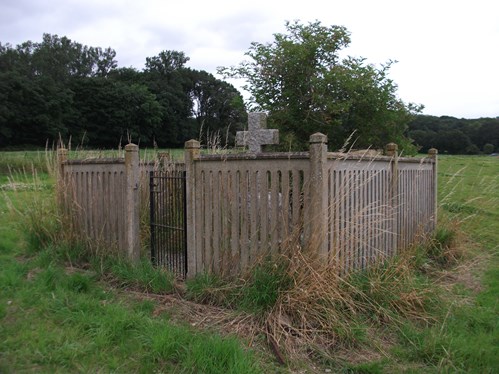 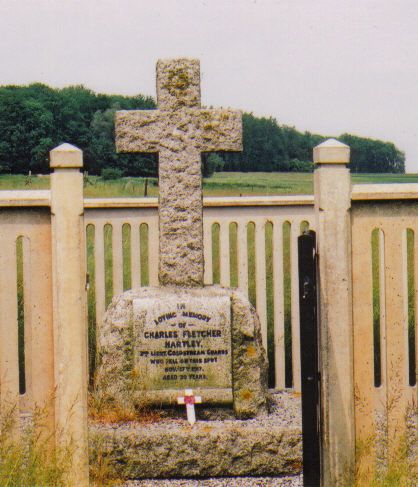 About three quarters of a mile away there is a memorial to Lt Windeler (qv), another American based Guards officer killed on the same day.