William Hoey Kearney Redmond was born in Wexford in 1861 the son of an Irish Member of Parliament who came from a long line of Catholic nationalist politicians. He joined the militia with the intention of making the army his career but resigned in 1881 to take part in the Land League movement. He and his brother John travelled to Australia to raise funds for the nationalist cause and whilst there met two sisters who became their wives. William married Eleanor Mary Dalton. There were no children. 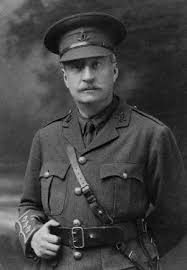 Back in Ireland the brothers became Parnellite MPs and John subsequently became Leader of the Nationalist Party. Both went to jail for "the cause" but always remained popular and highly respected by politicians of all sides. When war came they immediately put aside local politics "for the greater good", actively encouraging their fellow countrymen to fight, and William Redmond was one of the first to volunteer for the army. Readers wishing to know more about him are referred to "A Lonely Grave - The Life and Death of William Redmond" by Terence Denman (Irish Academic Press), Salient Points by Tony Spagnoly and Ted Smith, and Nigel Cave's first volume of Battlepound Europe (both books from Pen and Sword).

'Willie' Redmond, as he was always known, was commissioned as a captain in the Royal Irish Regiment, with whom he had served 33 years before, at the age of 53. He went to France with the 16th Irish Division in the winter of 1915-16 and was soon in action, winning a mention in despatches from Sir Douglas Haig. He gained his majority but this promoted him away from the action much to his displeasure and he only succeeded in returning to his beloved 'A' Company of the 6th Battalion, Royal Irish Regiment, the night before the Battle of Messines. By then he was 56 years old.

One of the nineteen mines blown on 7 June was at Macdelstede Farm immediately in front of the Royal Irish. 'A' and 'B' companies then advanced reaching the first objectives followed by the remainder of the battalion who passed through them and succeeded in taking Wyteschaete. But Major Willie Redmond, one of the first out of the trenches, had been hit almost immediately in the wrist and then, when hit in the leg, could do no more than urge his men on.

Stretcher bearers of the Ulster Division brought him in and eventually he reached the Casualty Clearing Station at the Catholic Hospice at Locre (now Loker) where he died that afternoon - almost certainly from shock.

The nuns buried him in the grounds of the hospice and three months later a special service at the graveside was attended by Irish leaders. Later, the ground was fought over again and after the War the ruined hospice was rebuilt on a new site nearer to the village. Willie Redmond's grave was moved to the nearby war cemetery but at the request of his family it was moved once again to a spot outside the cemetery wall where it remains to this day. The stone cross on this simple pave is inscribed: 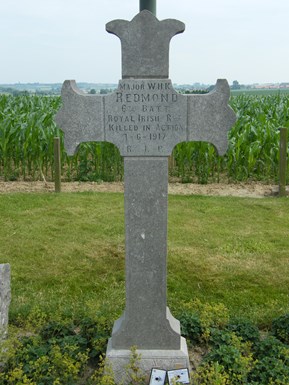 The Redmond grave is sign-posted, marked on local maps and is regularly visited by Irishmen, including the Royal Dublin Fusiliers Association, and others. It remains in the care of CWGC. 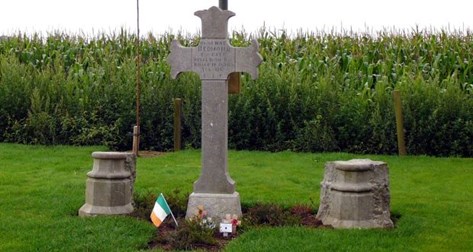