Killed in action 2 July 1916.
Buried at Fricourt British Cemetery
Memorial: Street named after him between the church and war memorial, Fricourt, Somme.

Robert George Raper was a family solicitor in Battle, Sussex, son of Mr and Mrs W A Raper of Battle, whose family had come from Yorkshire in the late 19th Century. In 1910 he married Ida Jean Macadam-Smith; they had four children the last of whom was born after her father's death, and lived in Richards Hill, a Victorian mansion just outside Battle. Before the war Raper commanded 'A' Company, 1/5 (Cinq Ports), a Territorial battalion of the Royal Sussex Regiment. 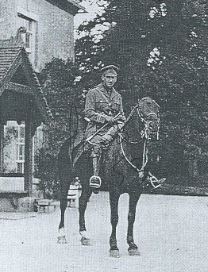 On the outbreak of war he transferred to a Service battalion, the 8th Bn. South Staffordshire Regiment, where he was also a company commander. Promoted Major and second in command at the end of May 1915, he remained with them until his death. He left an account of his military career, later reproduced privately as his 'War Diary'. An article describing the action in which Major Raper died entitled "Fricourt Liberated", by his step-grandson Major James Mills, was published in 'STAND TO'  in January 1998.

Suffice it to say that the first attack on Fricourt having failed, 51st Brigade took over. Major Raper successfully led a patrol to clear the dugouts in the German front line and pressed on across no-man's land. Although the main German defence had retired it was still a tricky advance for the South Staffords as the Battalion took Fricourt village and pushed on through their second objective and on towards the third, getting ahead of their support as they did so. By this time Major Raper was leading the two forward companies and succeeded in taking the final objective of Lozenge Alley under heavy fire. But he was killed in doing so. Later his body was brought back by a friend and buried south west of Fricourt.

Mrs Raper was determined to see her husband's grave remain where it was and by the end of 1918 was negotiating to buy the "small field or orchard, bounded on north and east by roads and on west by a light railway of no use for cultivation." (this is not quite right; the railway was to the south, roads to west and north) Instructions were given for the grave to remain where it was, the purchase was completed the following August and arrangements were made for the farmer's wife to look after the grave. In 1924 an almost horizontal stone cross supported clear of the ground on stone footings was erected over the grave inscribed:

Fricourt British Cemetery, a few yards away and almost exactly opposite the grave, had been completed meanwhile and considerable pressure was put on Mrs Raper to allow the grave to be taken there. This she resisted. In 1933 access was improved by a bridge across the stream, built by CWGC at the family's expense. As the years passed maintenance became more difficult, although CWGC gave much unofficial help, and in 1960 the grave was badly damaged by vandals. In 1965 the family decided the grave should be moved to its present site in the cemetery. When the grave was exhumed Major Raper' gold pins-nez, cufflinks, gold studs and tie pin were found. No trace of the bridge or grave remain today. 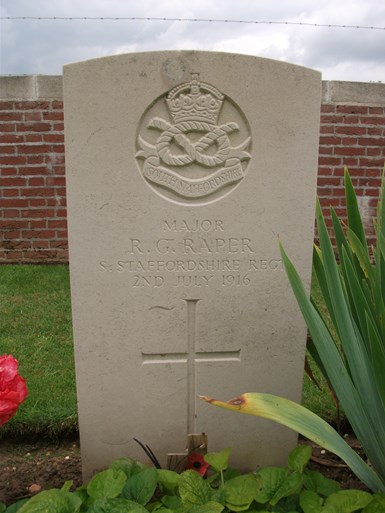 The Raper family contributed to the cost of rebuilding Fricourt church and the Twelve Stations of the Cross which adorn its walls are dedicated to him: 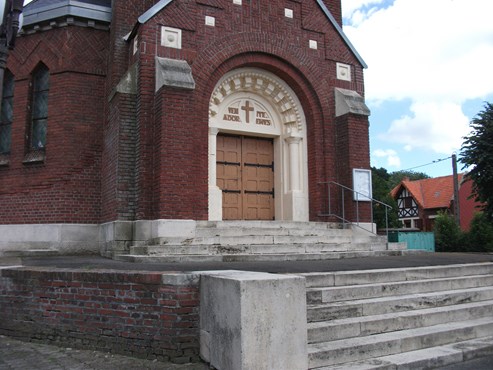 Major Robert Raper was seen by the people of Fricourt as their liberator and they remembered him by naming the street leading from their new war memorial to the Church, 'RUE DU MAJOR RAPER'. 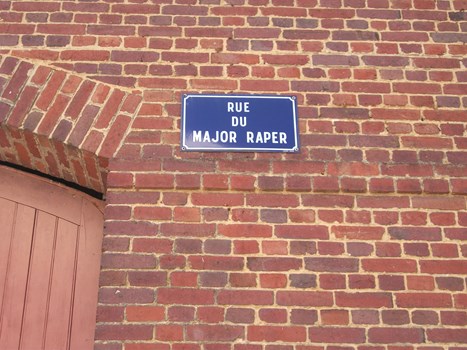