Killed in action 25 September 1916.
No known Grave. Remembered on the Thiepval Memorial

Memorial: A stone column beside the Ginchy to Lesboeufs Road, south of the Guards Cemetery.

Herbert Percy Meakin was born in India on 10 January 1891 the son of Henry George Meakin, a brewer, and his wife Alice. Meakin was educated privately before going up to Queen's College, Oxford. A bachelor, he lived at 'The Shrubbery', Barkham, Kent.

The Guards Division had taken severe casualties in front of Lesboeufs on 15 September. When they went in again on the 25th, General Pereira's 1st Brigade led on the right, parallel to the road. Good progress was made and Lesboeufs was taken at last.

Captain Meakin appears in the casualty list. A letter to his sister dated May 1917 said he was buried under a "durable wooden cross" at a point 40 yards NW of the Guichy - Lesboeufs Road.

After his death probate was given to his sister, Aileen Dorothy Meakin, spinster, of 25 Rue du Lycee, Pau, Basses Pyrenees, France who was also listed by the Commonwealth War Graves Commission as his next of kin. It seems that their parents had died before the War. 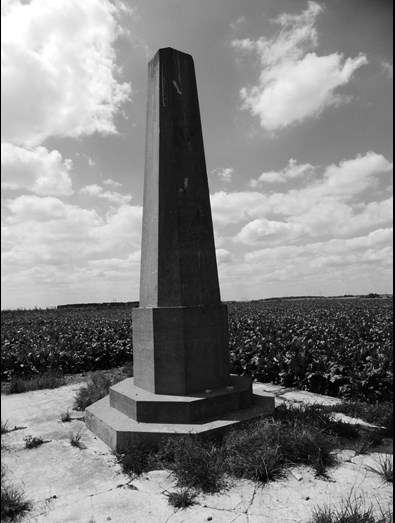 The inscription is incorrect with regarding the Machine Gun Corps. The text on the plinth has, over years, become almost indecipherable. 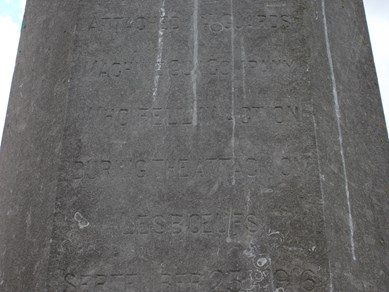 In 1991 the memorial was still in fair condition but there was no evidence of any right of access across the 50 metres of cultivated field to reach it. A photographic record shows the railings complete in 1991, badly damaged (apparently by farm vehicles) in 1992 and totally destroyed by 1994. 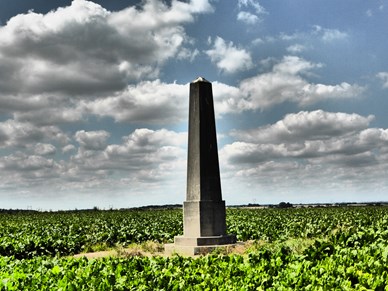 Above and below - the memorial in its old position, some way into the field.

More recently, after a campaign starting in 2016, with funds raised by Brian Smith, the memorial has been moved to the side of the road.

Below - the memorial with the wording now fully legible, in its new position (2022). 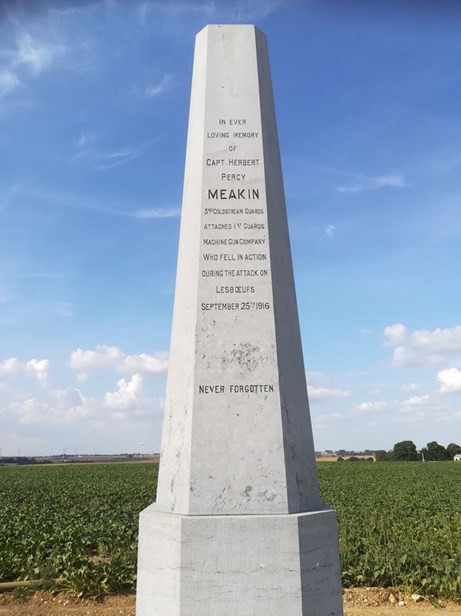 We understand that the guardian is L'Office Culturel d'Albert.