Edward James Vibart Collingwood-Thompson was born in Taunton on 8 December 1893, the only son of Mr and Mrs Edward Collingwood-Thompson. Educated at Cheltenham and The Oratory School, Edgbaston, (a Catholic school now at Woodcote, Reading) he won a prize cadetship for the RMC Sandhurst but decided to enter Woolwich instead. From there he obtained his probationary commission in the 3rd Battalion of the Royal Welsh Fusiliers in September 1913. Attached to the second Battalion when war broke out, he went with them to France on 11th August 1914 where he was gazetted to the Regular Army on 1st September 1914. 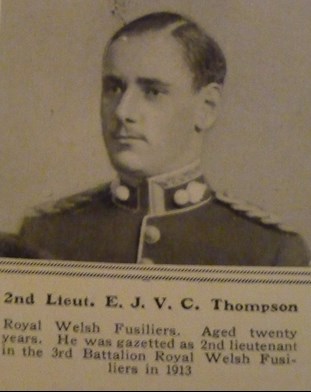 The history of 2nd RWF in the Great War is recorded in detail in Captain J C Dunn's "The War the Infantry Knew" (Janes 1987) and Frank Richards' Old Soldiers Never Die" (Faber 1933 and others). James Collingwood-Thompson is mentioned in both. Advancing in the Battle of the Marne the Battalion had reached La Ferte sous-Jouarre on 8th September 1914. The next day at first light the CO ordered 'B' Company to set up more observation posts as he endeavoured to clear the town. A German machine gun started up again and shortly afterwards, reports Captain Dunn, '...young Thompson was brought in seriously wounded; he had been standing at the comer of an open space calling to Wynne-Edwards." Richards says "The street below was full of men....when suddenly a machine-gun opened up from across the river sweeping the street. 2nd Lt Thompson of my battalion was badly wounded; most of the men had taken cover as soon as the gun opened up. Two men, Jackson and Edwards rushed forward in spite of the machine-gun and carried him to safety."

Collingwood-Thompson was taken to 12th Field Ambulance in Perreuse Chateau where he died at 4am the following day. He was buried in the Grounds of the Chateau - later used by French medical units - which its owner afterwards presented to the French Government as a permanent cemetery. Most of the graves are British.

Collingwood-Thompson's father pre-deceased him and his mother had remarried by 1921 but she and the townspeople probably erected the two memorials which are still to be seen near the river, just off the Meux to Chateau-Thierry Road, where her son was wounded.

A cast metal plaque about 2' square, high up on the wall of the corner house reads:

'HERE LIEUTENANT J. COLLINGWOOD THOMPSON 2ND BATTALION ROYAL WELCH FUSILIERS WAS MORTALLY WOUNDED SEPTEMBER 9TH 1914 HE DIED FIGHTING FOR THE RIGHT AND THE HONOUR OF ENGLAND AND FRANCE' and this is repeated in French. 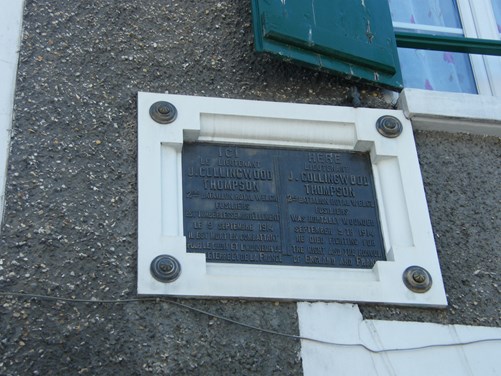 Below the plaque at an angle behind the railings is a stone column about a metre high inscribed: 'LIEUTENANT JAMES COLLINGWOOD THOMPSON 2ND BATTN ROYAL WELCH FUSILIERS WHO FELL HERE SEPTEMBER 9TH 1914 MORTALLY WOUNDED BURIED IN THE MILITARY CEMETERY PERREUSE JOUARRE'. 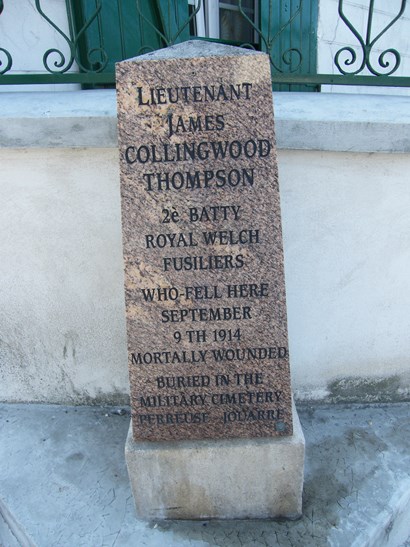 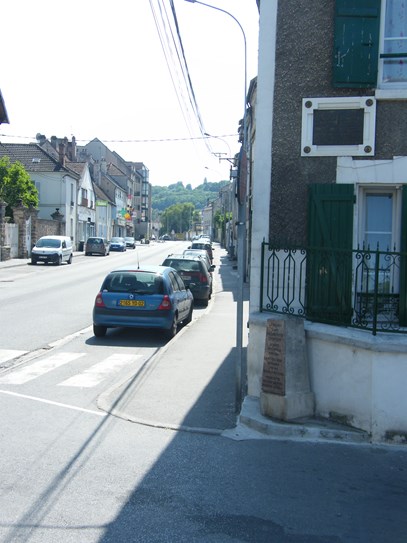 He was the first officer of the 2/RWF to fall in the Great War. 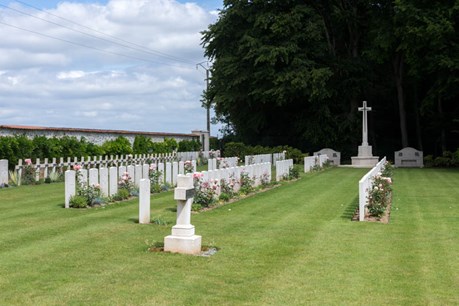