Killed in action 18 August 1916.
No known Grave. Remembered on the Thiepval Memorial

Memorial: A stone surrounded by a low wall in the field W of the Guillemont to Longueval Road, Somme.

George Futvoye Marsden-Smedley was the second son of John Bertram and Gertrude Mary Marsden-Smedley of Matlock, Derbyshire. Born in 1897 he was educated at Harrow (1911-15) where he was in the OTC, a monitor, captain of the football and cricket elevens (but got a 'pair' in the Eton v Harrow match of 1914) and matriculated at Trinity College. Cambridge. 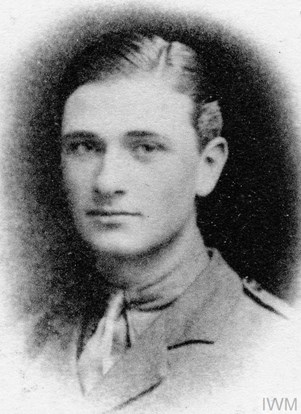 Leaving school in the summer he joined up straight away, being commissioned into the Rifle Brigade in August 1915, He went to the Front in July 1916 just before his nineteenth birthday, straight into the Battle of the Somme. His surviving letters describe vividly his twenty five days on the battlefield, the last written on 17 August the day before the attack when his battalion was holding the line in front of Trones Wood. In it he thanked his parents for his new identity disc, "it makes such a difference having a nice chain around one's neck instead of a dirty old bit of string....".

The next afternoon he led his platoon in the attack on Guillemont Station. Having been themselves heavily shelled all day, three companies went forward under a creeping barrage crossing no-man's-land with little loss until they met stiff resistance from the strong point around the Station. "The enemy's garrison was determined and courageous and there was a fierce hand-to-hand fight..." Marsden-Smedley reportedly charged a machine gun which was holding up the Company and "After shooting one of the men he was shot by a German Officer and fell on the parapet of the German trench."

Despite his new identity disc his body was never found. His father made every possible effort to trace him, pin-pointed the spot where his son was last seen and fenced it off while arrangements were made for its purchase. He was, naturally, upset to hear from CWGC in February 1921 that the post and wire fence had been removed "the railway and station buildings in the vicinity are in rapid process of reconstruction and the trenches and shell holes are being filled in and leveled." Fortunately, shortly afterwards he completed the purchase and put up a memorial stone inscribed:

'IN MEMORY OF GEORGE FUTVOYE MARSDEN-SMEDLEY OF LEA GREEN, MATLOCK, DERBYSHIRE, 2/LT 3RD RIFLE BRIGADE AGE 19 WHO FELL IN AN ATTACK ON GUILLEMONT ON AUGUST 18TH 1916 IN THE BATTLE OF THE SOMME, AND LIES NEAR HERE IN AN UNKNOWN GRAVE. LIVELY AND PLEASANT IN LIFE / IN DEATH - SERENE AND UNAFRAID MOST BLESSED IN REMEMBRANCE.' 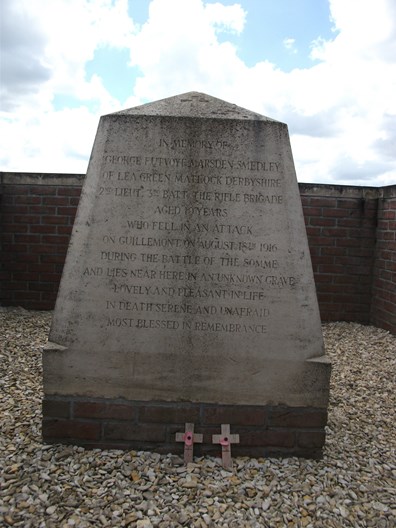 A small garden was surrounded by a rendered brick wall and an iron gate. 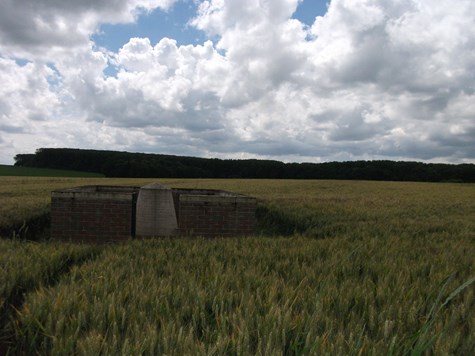 2nd Lt Marsden-Smedley's parents and five brothers and sisters all survived into old age but by 1990 with the last gone the memorial was in need of attention. Minor repairs were made by members of the WFA, but in 1997 a major refurbishment was carried out on behalf of the family and the former family firm by Christopher Marsden-Smedley, nephew of George Futvoye, with the assistance of the WFA. The stone was cleaned and some of the lettering recut, white chippings were laid, and the wall was rebuilt most effectively using bricks and stone-copings reminiscent of walls to British cemeteries. John Smedley and Son agreed to act as guardian and a discreet plaque on the wall confirms this.

The memorial was rededicated in a fitting ceremony attended by local dignitaries and more than thirty members of the family on 19 July 1997.