Killed in action 9 April 1917.
No known Grave. Remembered on the Arras Memorial
Memorial: Cross and statue in the copse adjacent to the Feuchy-Chapel roundabout on the S side of the Cambrai Road E of Arras.

Henry Rowland Isaacs, born in 1897, was the only child of Joseph A Isaacs and his wife, Pauline, of 140 Lower Addiscombe Road, Croydon in Surrey. Joseph Isaacs was a cousin of the first Marquess of Reading on his father's side. His wife was Belgian born.

2/Lt Isaacs is thought to have seen some action and transferred from the 4/Suffolks shortly before the Battle of Arras. On the opening day he was in the 12th Division attack north of the Cambrai Road; the objective being capture of the Feuchy-Chapel Redoubt and to breach the line just west of Orange Hill. The advance went quite well at first but while 9/Essex succeeded in taking the Feuchy-Chapel Redoubt, most of the attacking force was stopped by wire and machine gun fire at Church Work just to the north. Desperate attempts to cut the wire by hand were frustrated and troops were forced to dig in along the Feuchy-Neuville Vitasse Road. After a bad night of sleet and snow the 7th Suffolks finally broke through the following morning. Among those killed at Feuchy-Chapel late on 9 April was 2nd Lt Isaacs.

As the battle moved on the dead were buried individually in a plot said to have been just north of the Cambrai Road at trench map ref. 51b.N.3.b.5.3. Isaac's distraught parents responded rapidly, writing to CWGC on 27 April asking for photographs and to be allowed to visit and set up a family vault at the place where he was buried. The visit was not allowed but a photograph was taken for them in August clearly showing the separate graves of their son and Captain D W A Nicholls MC (kia 10 April. Remembered on the Arras Memorial), believed to be his company commander.

Having been refused permission to have the his son's body taken to Lourdes for a proper Roman Catholic burial, Mr Isaacs went to visit the grave in 1919 but was unable to find it The map reference was found to be wrong and art officer identified the real site as 51b.N.3.b.7.3. Mr Isaacs discovered some graves still there but most had been lost in later fighting and those of his son and Capt Nicholls could no longer be found.

Mr Isaacs did everything possible to trace his son. He was the only Catholic in his battalion and he found a stump marked RC. But the photograph proved the grave was not marked in this way. He had the burial reports checked and made sure CWGC had every detail. His son was shot in the left breast through his "Dayfield body shield back and front". He wore a "body belt with pockets sewn up containing, besides reserves of currency notes, Catholic medals, gold, silver and "Fix" gilt". And he wore a ring of aluminium with copper insert marked "Yser 1914, 1915". He described his son's teeth and the appearance of Capt Nicholls "but his face and chest were smashed by a shell". Sadly, it was to no avail.

In 1920 the Isaacs bought three quarters of an acre of ground where they believed their son had actually fallen, had it fenced with wire and concrete posts shaped to look like tree trunks and built an elaborate calvary. An extensive garden was planted, backed with poplars and the main inscription reads: 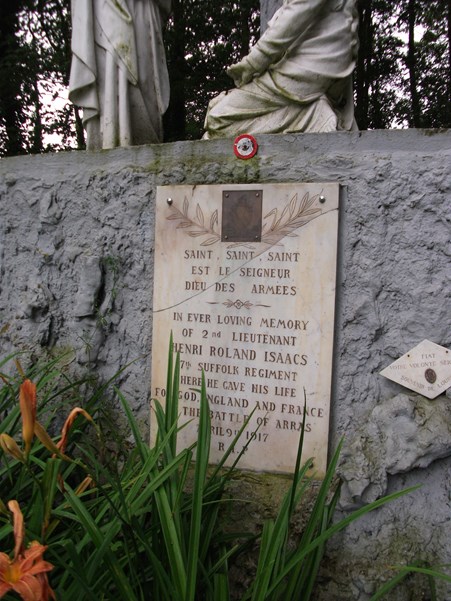 They also paid for the bells for the new Chapel at Feuchy and moved to France where they bought a house at 11 Rue de Beaufort in Arras so they could visit the memorial more often.

By 1934 the problems of maintaining the memorial and garden were becoming apparent and, concerned for its future, the Isaacs asked CWGC to take it on. But such was its complexity and amount of work needed the Commission reluctantly declined. Forced home by the Second World War, Mr Isaacs died in 1942 and by the end of the 1940s the memorial was overgrown and in a sorry state. Mrs Isaacs died at the age of 92 in 1954 and nothing was done until 1978 when the Souvenir Francais took charge. They organised a team of young people to clear the site, carry out essential repairs and for the first time in many years the memorial could once again be seen. Restoration to its former glory was out of the question due to cost but regular gardening to keep the memorial and its surrounds clear is still carried out by the SF. Currently in charge is M. Jules Gruson who retired back to Feuchy where he had known Mrs Isaacs as a young man.

Thus, the lasting memorial to their son which the Isaacs tried so hard to achieve seems safe for the future. 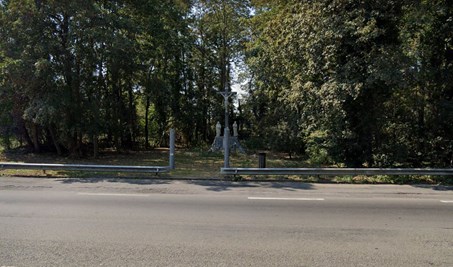 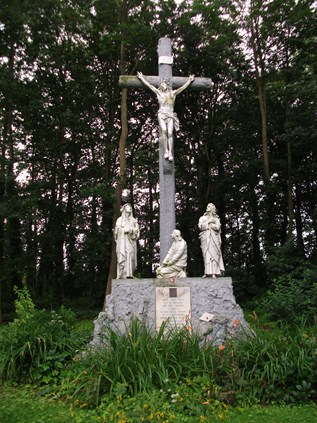