Killed in action 21 December 1914.
No known Grave. Remembered on the Le Touret Memorial

Memorial: A large stone memorial with kerbed surround in front of a house in the residential area of Givenchy-les-la-Bassee.

Hillyar George Edwin Hill-Trevor was the only son of the Hon. George Edwyn Hill-Trevor and his wife and a grandson of the first Lord Trevor of Chirk, North Wales. He was a direct descendant of Arthur, Duke of Wellington. Born at the Hotel Paoli in Florence, Italy on 31 December 1895, Hill-Trevor was educated at Wellington College (1909-13) where he attained the rank of Corporal in the OTC, and the Royal Military College, Sandhurst. He was commissioned into the Scots Guards in August 1914 and promoted Lieutenant in November when he joined his battalion in the field. 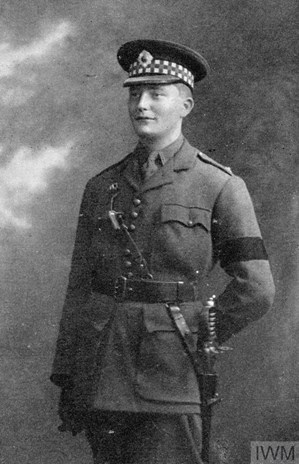 The 'Scots Guards in the Great War' (John Murray 1965) gives the clearest explanation of the confused fighting south of Givenchy on 21 December. "The objective of the 1st Brigade in the attack on this day (21st Dec '14) was the capture of the trenches about the Rue d'Ouvert (to the east of the village), which had been lost the day before. The Scots Guards were on the right of the brigade, just north of the canal as far as Givenchy. .......It was nearly dark at 4.15pm when the battalion was ready for the attack in position west of Givenchy. No opposition was met until Givenchy was reached. Here there was an unfortunate accident, due to the darkness and the fact that the ground was quite strange to the troops engaged. The right of the Cameron Highlanders lost direction and they and the Scots Guards narrowly escaped attacking one another and are believed to have actually exchanged shots before the mistake was discovered. The losses that day were not serious - Lt H G E Hill-Trevor who had only joined the battalion on the 18th November at Borre, and of course was in his first and last action, was killed with two men. Twenty three men were wounded or missing."

After the War an elaborate memorial was built at the place where he died. Carved from stone is a large figure in mourning backed by a column and standing on an ornately carved base. This is set in a large curbed surround filled with granite chippings. 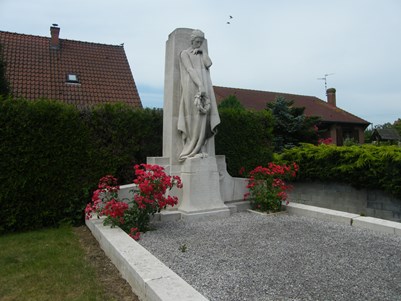 The top of the column is inscribed:

'FOR GOD AND COUNTRY'

and across the base is written:

On the centre of the base: 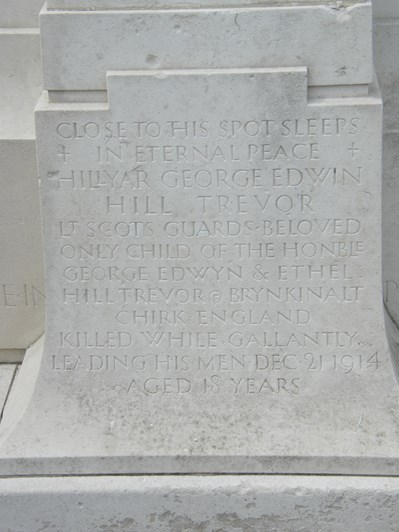 In 1927 minor repairs were needed and General Du Cane, whose wife was an aunt of Lt Hill-Trevor, made financial arrangements for the memorial to be cared for by CWGC and so it has remained ever since.

In the 1980s the country lane on which it stood was developed and the memorial is now in front of a house with driveways on either side of it. Although the memorial has been well treated by its new neighbours, the foundations were gradually becoming exposed and eroded and the endowment was insufficient to fund major repairs. In 1998 the Battlefield Memorials Project Fund of the WFA paid for this work to be done and this unique memorial is now well set for the future. 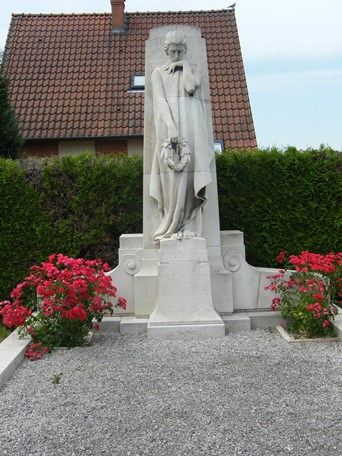