Memorial: A granite block just outside the cemetery wall.

Pulteney Malcolm was born in August 1894 the only child of Lt Col P Malcolm MVO DSO, Chief Constable of Cheshire, and his wife Emily and came from a long line of military men. Malcolm won a scholarship to Eton where he had his Upper Boats and became a sergeant in the OTC. He went up to Corpus Christie College, Oxford, in 1913, rowed in his college boat as a freshman and won the University Challenge Sculls. 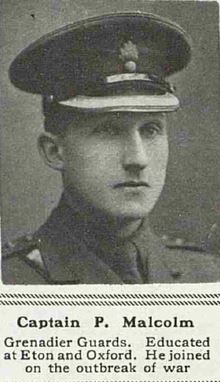 Malcolm volunteered on 4th August 1914 and was gazetted initially to the KOSB before transferring to the Grenadier Guards. Wounded and gassed at Loos in September 1915 he recovered to join the newly formed Household Battalion and was wounded twice more, the last time in 1917. He was then appointed Adjutant of the Reserve Battalion at Windsor where his slight figure was remembered walking his big dog in the Eton precincts. In January 1918 he was selected to command the King's Company of the Grenadiers.

Captain Malcolm was away when orders came to attack but by riding and walking all night he reached his battalion just in time to lead the King's Company's advance to Mory Switch Trench, in thick mist, at 4.30 am on 25 August 1918. As the mist lifted exposing the attackers, their supporting tank was put out of action and the Grenadiers were hit by very severe fire from Bank's Trench. Captain Malcolm was killed leading his company forward from Mory Switch.

Malcolm and the twelve other casualties were buried in a row by the Germans near where they fell in the sunken road at l'Homme Mort. After the War, his distressed parents did their best to have Captain Malcolm's body brought back to the family home in Scotland. When this failed they tried to buy the land and fought every move for the graves to be taken to the proposed British cemetery near by. The landowner had agreed to the graves staying where they were and eventually a compromise was reached. The British cemetery was built around the thirteen graves at l'Homme Mort instead and the site originally designated was abandoned.

Permanent headstones were erected in 1926 by which time the posts and ropes and stone imagery of the Malcolm grave were deteriorating and were removed. But Captain Malcolm and his men still lie exactly where they were originally buried. 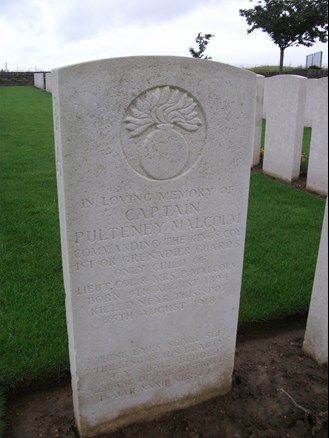 Immediately outside the cemetery wall adjacent to the graves is a simple stone memorial erected by the Malcolms which is inscribed on the outer face: 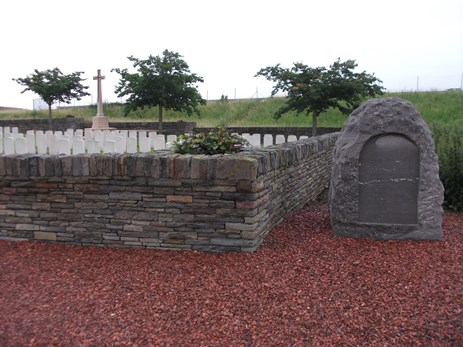 and on the inner:

'IN THY NAME WE GO AGAINST THE MULTITUDE 11 CHRON XIV VERSE 11.'

'TO THE HONOURED AND CHERISHED MEMORY OF CAPTAIN PULTENEY MALCOLM COMMANDING THE KINGS COMPANY 1ST OR GRENADIER GUARDS WHO GAVE HIS LIFE LEADING HIS COMPANY CLOSE TO THIS SPOT ON 25TH AUGUST 1918 AND IS BURIED IN THE ADJOINING CEMETERY ALSO OF THE N.C.O. AND GUARDSMEN WHO FELL WITH HlM (in column) C DRACKETT G.J.S. DIXON UNKNOWN A.ROE LCE.SERGT A. WILSON M.M. A.H.PASCOE UNKNOWN A.G. MCQUAGUE A. PRIEST UNKNOWN SERGT W.H. CUSHEN (all) GRENADIER GUARDS F.V COLE 2/4 K.O.Y.L.Y' 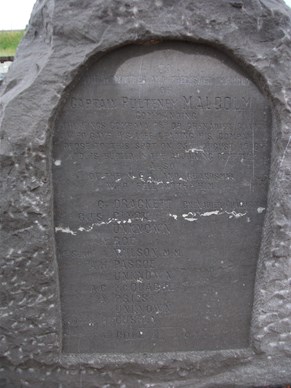 The names are in grave order. All were killed on 25th August with the exception of the last two who died two days later. Sgt Cushen was in the 2ND Bn.Grenadiers..

The stone is in excellent condition and looks safe and secure for the future. But the description of the spot in the Cemetery Register "....on a wide plateau, among cornfields" is belied today by the rush of traffic on the Al autoroute on one side and the TGV trains on the other.