Killed in action 10 September 1916.
Buried in an isolated grave at Faffemont Farm, Combles.

Grave: Flat stone with kerb, in a field at Faffemont Farm, Combles.

Richard (Dick) Heumann was born in Brixton on 9th July 1887, the only child of Herman Heumann who was of Swiss extraction, and his wife, Pauline, sometime of 22 Belsize Avenue, Hampstead, London. Heumann was educated at University College School (1899-05) where he was a member of the OTC, keen on music, and took part in cricket and football. He was Captain of the Old Boys Footer team in 1913-14, the last season before the War. Meanwhile, Heumann had been commissioned into the 2nd London Regiment in 1908, promoted Lieutenant the following year and Captain in 1911, shortly before commanding the detachment from the Regiment at the Coronation of King George V. 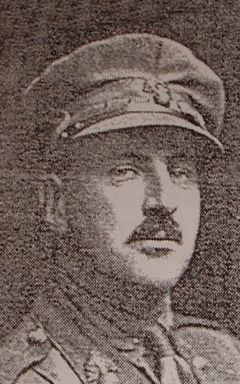 Capt Heumann went to France with 1/2 Londons on 9th January 1915 and took temporary command of the Battalion early in 1916 when the CO was in hospital. In 1916 he was mentioned in despatches by Sir Douglas Haig (London Gazette 15 June 1916).

Serving with 56 Division, 1/2 Londons took severe casualties at Gommecourt on 1st July and were again heavily engaged at Leuze Wood at the beginning of the third phase of the Battle of the Somme in September. On 10th, 'A' Coy lost all its officers in an unsuccessful attempt to take trenches south east of Leuze Wood. At 6pm Germans were seen massing for a counter-attack and Captain Heumann, commanding 'B' Coy, was ordered to push forward to occupy Leuzenake (or Q) Trench. (This ran from the southern tip of Leuze Wood to the present-day position of Faffemont Farm). Capt Heumann called a quick conference in the shell hole forming Ms HQ but a shell burst over the party, killing Heumann, his company Sergeant Major and Sgt Torrance and wounding Lt Attenborough, 2nd Lt Ursell and 2nd Lt Childs who later died of his wounds. 2nd Lt Cambray, the only officer left, managed to get the rest of the Company into the Trench.

Captain Heumann and his NCOs had been buried together in the shell hole and after the War Mr Heumann bought 42 sq m of land and, apparently with the agreement of the other families, arranged for the grave to remain where it was. He built an elaborate garden with an outer fence protecting a lawn and planted areas and an inner one consisting of chains supported by four posts surrounding the single recumbent "Pierre de Soignies" slab of Belgian granite raised some 18 inches above the ground. This was headed by the three original GRU wooden crosses and two regimental crosses were positioned at the foot. 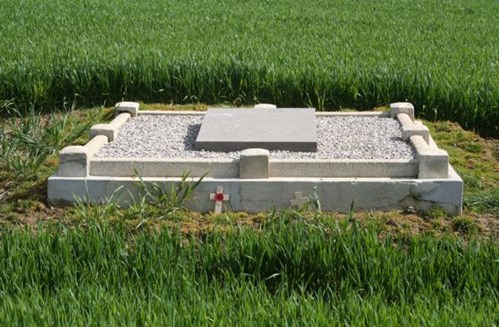 The inscription on the slab below the regimental crest reads: 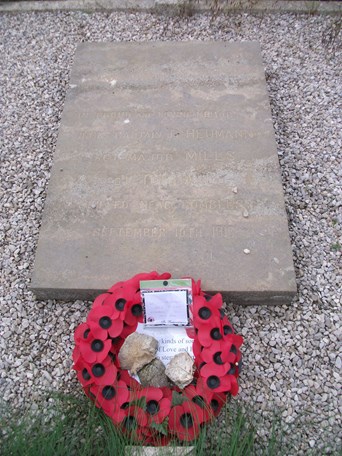 The Mayor of Combles gave permission for a path to the site "irrespective of crops".

Sgt Maj Bertram Mills, 36, a regular soldier who had received his Volunteer Long Service Medal, was born in Hastings. He enlisted at Westminster and lived in Lambeth, the son of Jane Mills. 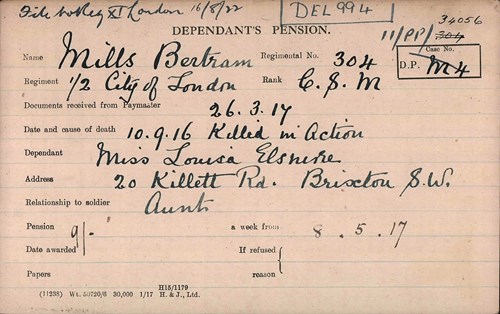 Sgt Alfred William Torrance, 24, was the son of Mr and Mrs F G E Torrance of 4 Ashdown St, Kentish Town, London. He enlisted in London and lived in St Pancras.

The land had been bought originally on the Heumann's behalf by a Frenchman, M Carlebach. It seems he was Mrs Heumann's nephew and the son of Lt Col Carlebach, officer commanding 2nd Bn. Londons before the War. In 1924 the Heumarras came to a financial arrangement with CWGC for the future care of the grave. They were elderly - in fact they died in 1927 and 1929 - and left further provision in their wills. M Carlebach was the family contact until 1947, since when CWGC have continued to maintain the grave on behalf of the Carlebach family trust in Geneva. The memorial had proved costly to maintain and in 1960 the garden and fences were removed, the area of land reduced, the slab lowered and protection was given by a surround of granite chippings and a concrete plinth which are still there. It remains an official war grave.

Faffemont Farm (this is the correct spelling but British records call it Falfemont) was rebuilt on a new site and the Bois de Faffemont now occupies the site of the old farm. The path to the memorial is no longer there but ran from a point on the track about 100 yards SW of the present farm. As a courtesy visitors are asked to call at the farm and avoid damaging crops when visiting the grave. 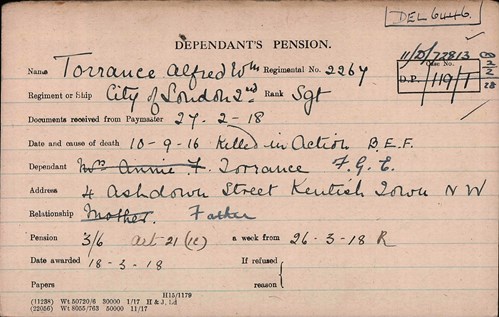 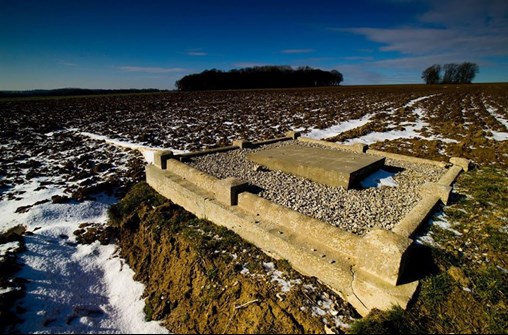