No known grave. Remembered on the Thiepval Memorial

Memorial: A stone cross outside the east wall of Serre Road No 2 Cemetery, Somme

Valentine Ashworth Braithwaite, known as Val, was born in 1896 the son of General Sir Walter Braithwaite, later a Commissioner of the CWGC, and Lady Braithwaite. He was commissioned on 15 August 1914. Some records give his final rank as 2/Lt but the Army list confirms his promotion with effect from 10 June 1915 and for some time at least, he served as a temporary Captain. The date given for his death also varies between the 1st and 2nd of July. He was posted missing until June 1917 but as no date of death has been found in the Army list the CWGC register date has been used here. 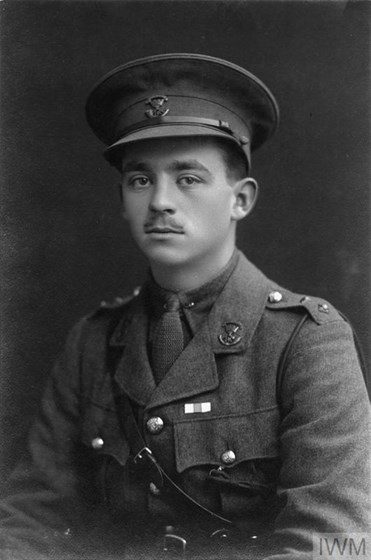 On 1 July 1916 the Somersets and others were to assault the line between Redan Redoubt and the Quadrilateral. The ridge they should have crossed was swept by machine gun fire, forcing the attack to the left and into the forward trenches of the Quadrilateral (roughly at the SE corner of Serre Road No 2 Cemetery). The War Diary says "....it is impossible to get a detailed account of the fighting that ensued, but the situation after the first hour or two was that men of various battalions in the division were holding part of the the 'Quadrilateral' and were involved in a fiernce grenade fight.... heavy casualties were also suffered by all battalions from the enfilade machine-gun and rifle fire from both flanks...."

Among the very heavy casualties of the day were 16 officers of the Somersets killed - although most, including Braithwaite, were posted missing for some time. His body was never found.

In June 1921, General Braithwaite bought 1075 square metres of land at a franc per metre where he believed his son had been killed and erected a stone cross inscribed

IN MEMORY OF / VAL BRAITHWAITE, LIEUTENANT / 1st BATTALION SOMERSET LIGHT INFANTRY / WHO FELL IN ACTION NEAR THIS SPOT / 1st JULY 1916

and on the base

GOD BURIED HIM AND NO MAN KNOWETH HIS SEPULCHRE 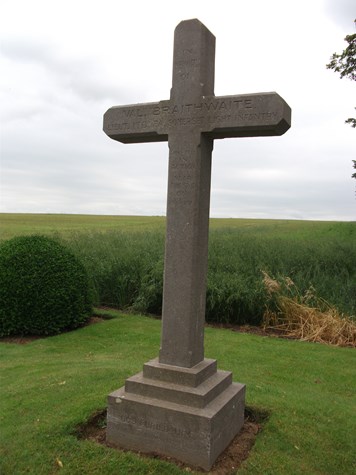 Later, the priest of nearby Hebuterne acquired the field adjacent to Serre Road Cemetery No 2 and asked for "the memorial to be removed because it hampered his cultivation". The wrong piece of ground had been conveyed to General Braithwaite, it transpired; he had actually bought land within the Cemetery. There being no title to the land where the memorial actually stood, in 1929 the priest sold General Braithwaite a piece of ground about 8 x 9 yards by the roadside and the memorial was moved to its present site.

This left the ground within the cemetery which had already been bought, at least in theory, by the French state in order for the cemetery to be built. The matter was finally settled with the family twenty one years later.

Meanwhile the memorial had been maintained on an annual basis by the CWGC and shortly before her death in 1950 Lady Braithwaite made provision for the future. After her death her sister's son-in-law, Lt Gen Sir John Swayne, Colonel of the Somerset Light Infantry 1947-53, oversaw the memorial but by the early 1970's the family seems to have died out. The stone cross remains in good condition, however.