No known grave. Remembered on Le Touret Memorial
Memorial: A stone cross on N side of the N41 road NW of La Bassee, nearly opposite the German Cemetery.

The Hon James Boyle who was born in Scotland on 11th March 1880, the second surviving son of the 7th Earl of Glasgow and his wife, was educated at Wanganui College, New Zealand, and Trinity Hall Cambridge. He joined the Ayrshire Militia in 1898 serving throughout the Boer War, and then in 1903 joined the regular army being commissioned into the Royal Scots Fusiliers. Boyle served as ADC to the Governor of Victoria and from 1912-1914, to Gen Sir Horace Smith-Dorien. 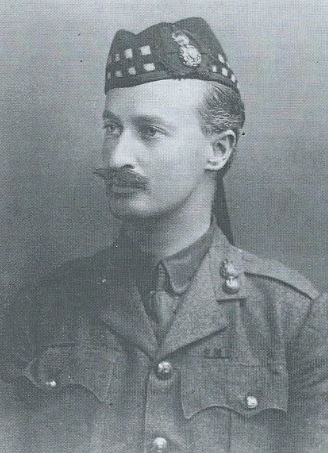 Attacking from the north west, 9th brigade was directed towards the village of Herlies, the objective of the Scots Fusiliers being the chateau in the wood, (the Bois Chombart is still there, to the south of the village, halfway to Illies and some 1100 yards from their start line.) They had to cross a dip with a small farm at the bottom and advance through a maze of ditches. Ahead they could see the ground rising to the La Bassee Road (now the A41). The wood was surrounded by entrenched German machine guns. Held up on the left the Scots were forced to dig in 500 yards short of the objective under heavy fire. Just as it was getting dark the Battalion was ordered to continue the attack and 'D' Company under Capt Boyle was sent up in support. By 5.30 pm they were only 60 yards short of the wood but with their flanks in the air they were ordered to retire.

Capt Boyle, says the "History of the Royal Scots Fusiliers" (J Buchan, Nelson 1925), fell as he reached the German trenches, but according to research by Geoff Bridger (see Stand To! No 22, Spring 1988), Boyle and Capt Lyon found themselves in a German trench occupied by dead Germans. "For some unaccountable reason Capt Boyle prodded a dead German with his stick, a move which awakened the, in reality, sleeping soldier who promptly bayoneted and killed him." He was buried by the Germans but the grave was subsequently lost.

Captain Boyle and his wife had three children. She was the sister of Captain Bowlby (qv) and later married 'Boom' Trenchard, who became Marshall of the Royal Air Force Viscount Trenchard. She died in 1960. 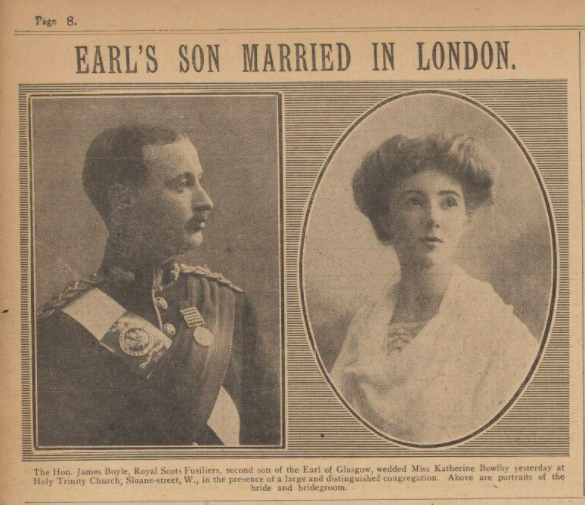 Above: James Boyle and his wife Katherine (Daily Mirror)

After the War Captain Boyle's family erected a memorial in the form of a Celtic stone cross with surrounding plinths and corner posts by the La Bassee road opposite the wood where he fell. The inscription on the base reads: 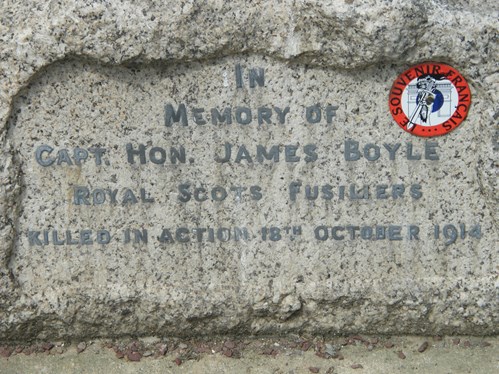 In recent years the Souvenir Francais has kept the memorial clean and tidy but in 1994 the French authorities proposed to move it to accommodate a road widening scheme. In this case the exact spot was not critical and so, acting on behalf of the family, it was agreed to the move requesting that the base should be replaced at public expense. 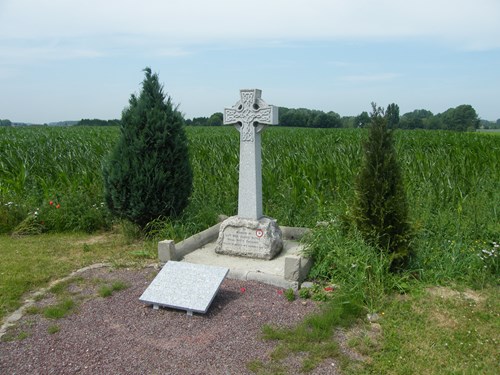 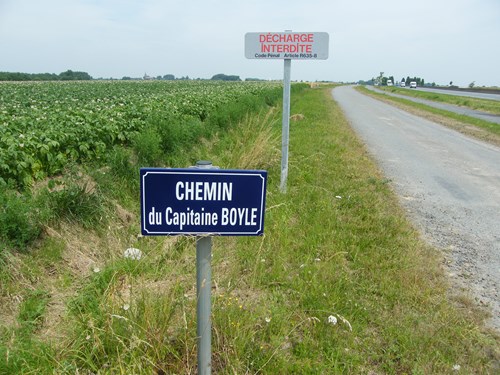