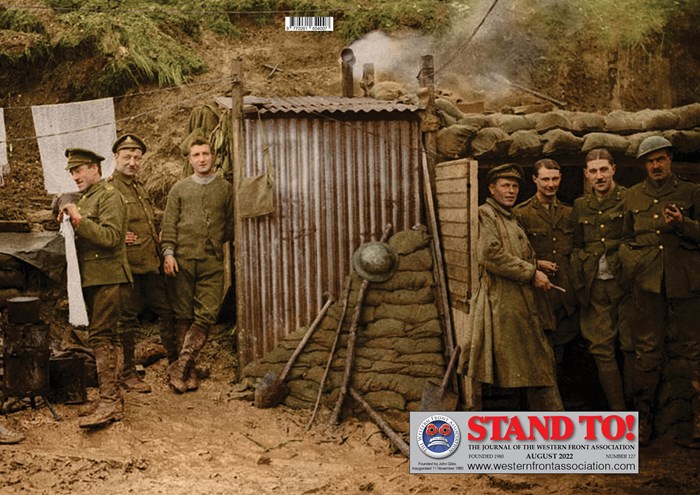 Artillerymen outside dugouts, Somme 1916. This photograph shows a group of soldiers standing in the entrance to a dugout. Other men are outside, standing beside a washing line with towels on it. A pot is steaming on a brazier made of a tin drum. The cap and collar badges of the men are not distinct but appear to vary, suggesting they are from more than one unit. This rather domestic scene appears well removed from the reality of the trenches at the front. It may have been intended to counter criticism of the campaign by implying that it was better organised than was the case. © Colourised by Tom Marshall at PhotograFix.

Communication Lines by the editor

The Camera Returns (108) by Bob Grundy and Steve Wall

‘Missing, No Evidence Available...’ Whatever happened to Fred Eastwood? by Graham J Howie

Britain’s Changing Influence Over the Design, Development and Deployment of Allied Tanks in the Great War by Cameron Ward

Jackie the Baboon by Dirk Danschutter

Moonlight Massacre: The Night Operation on the Passchendaele Ridge, 2 December 1917 by Michael Locicero

The Commissioners: How two men led the two police forces which became An Garda Siochana, the Civic Guard of the Irish Republic Dublin, Ireland by Paul Smyth.

Keeping the Home Fires Burning: Entertaining the troops at home and abroad during the Great War by Phil Carradice.

The Approaching Storm: Roosevelt, Wilson, Addams and their clash over America’s Future by Neil Lanctot

The Meuse Heights to the Armistice by Maarten Otte

Asia in Flanders Fields: Indians and Chinese on the Western Front, 1914– 1920 by Dominiek Dendooven

If have questions about how to access the members-only area, please email membership@westernfrontassociation.com